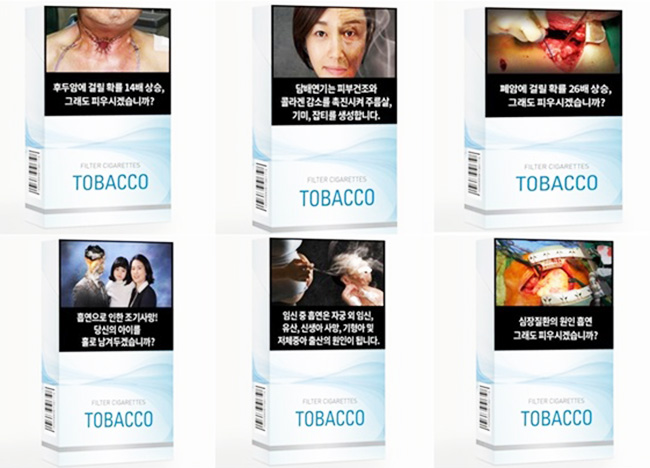 The government has unveiled 40 graphic photos that will be put on cigarette packs from the end of this year as part of an anti-smoking campaign.The Ministry of Health and Welfare unveiled 10 images depicting the dangers of long-term smoking. They are lung, laryngeal and oral cancers, heart disease, strokes, sexual function disorder, premature skin ageing, secondhand smoking, the effects on unborn babies of pregnant women who smoke and premature death.The designs follow a month-long discussion and studies by experts including the Korea Health Promotion Foundation, Sogang University faculty members and public health experts.

Starting from Dec. 23, cigarette manufacturers will have to cover at least 30 percent of a packet’s front with one of the images and at least 20 percent of it with a written warning, so that customers can clearly see the warnings on shelves at stores.

Korea has tried since 2002 to make the graphic images compulsory, and the National Assembly finally passed the related revision last May.

The measure comes after the ministry increased cigarette prices from 2,500 won a pack to 4,500 in January 2015 in an effort to curb the smoking rate from 24 percent last year to 20 percent by 2020.

The ministry expects the nation to save up to 4 trillion won a year in medical costs.

“Putting images on the packet is a non-expensive anti-smoking approach recommended by the World Health Organization currently effective in 80 countries,” a ministry official said. “It raises awareness about the possible health consequences, and is thus effective in curbing smoking.”

Canada was the first country to adopt the policy in 2001 using 16 images that must cover 75 percent of the front and back of the packet.

“According to a study in Canada, cigarette packs with such images reduced the likelihood of a person becoming a smoker by up to 12.5 percent,” the official said.

“According to another study in Australia, two-thirds of non-smoking teenagers said the images had discouraged them from smoking.”

The Korea Association on Smoking or Health (KASH) welcomed the measure.

“I think the policy will be effective in curbing smoking, which is not only an unhealthy personal habit but a contributor to social welfare costs,” a KASH official said. “I hope the government will use far more confronting images to improve the effectiveness of this campaign.”

A British American Tobacco official said the images were far more shocking than was socially acceptable, which was a violation of the law.

“Under the law, the images should not be too extreme to cause disgust,” he said. “We think the graphics clearly go beyond this and that tobacco companies, including us, will seek expert opinion about whether it breaks the law.”