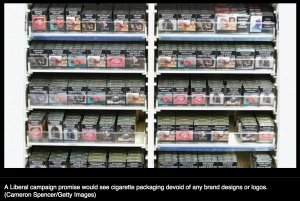 The Canadian Cancer Society is celebrating a promise by the newly elected Liberal government in Ottawa to force tobacco companies to sell their cigarettes in plain packages devoid of brand designs and logos.

The commitment, which is spelled out in a single sentence on page 21 of the Liberal Party’s 88-page book of campaign pledges, is unlikely to be one of the government’s top priorities. And it’s not the first time that the idea has been floated by a Liberal prime minister – Jean Chrétien promised to examine the feasibility of plain packaging as far back as 1994.

But anti-tobacco lobbyists say it would be an important step in continuing efforts to eliminate any remaining hints of glamour associated with smoking, the leading preventable cause of premature death in Canada. And, they say, it would place this country among world leaders in the smoking-reduction effort.

If the government does demand plain packaging for cigarettes, it would be following the example of Australia, which prohibited brand designs and logos in late 2012 after protracted legal battles with tobacco companies. Ireland and Britain are expected to implement similar measures in the spring of next year.

“The package is a mini-billboard that walks around school grounds, homes and communities,” Rob Cunningham, a senior policy analyst with the Canadian Cancer Society, said in a telephone interview on Friday. “The tobacco industry should not be able to make its products more appealing to kids and that’s exactly what they do with packaging. Plain packaging removes the allure.”

But a representative of the tobacco industry said the government’s strategies would be more effective if it focused on education rather than packaging alterations, which he dismissed as “feel-good” measures.

Eric Gagnon, the head of corporate affairs for Imperial Tobacco Canada Ltd., said his company recognizes the health risks associated with smoking and agrees that children should not smoke. But 75 per cent of cigarette packs are already covered by warning labels, and stores are not permitted to put cigarettes on display, he said.

“I don’t think anybody walks into a convenience store today and says ‘you know what, this brand looks cool, I will start smoking it,’” Mr. Gagnon said. “The root of the problem is peer pressure, and it’s the environment in which people grow up, and that’s where the government needs to put a lot of effort.”

If Canada does adopt the Australian model, cigarette packages would still depict the ugly side of smoking – with pictures of people in the final stages of cancer, lungs ravaged by emphysema, and wilted cigarettes to signify impotence. But they would be a drab brown with the brand names in small white letters dwarfed by health warnings.

Hedy Fry, a veteran Liberal MP who was her party’s health critic, said the plain packaging requirement will be part of her government’s plan to help Canadian children live healthier lives. “We are thrilled to have received the Canadian Cancer Society’s support for these measures.”

Garfield Mahood, the president of the Campaign for Justice on Tobacco Fraud, an anti-tobacco lobby group, said he hoped plain packaging is a commitment that will not fall by the wayside. “It will take time and consideration, and the health community will have to move aggressively to make it happen,” he said.

It is also important for the tobacco companies to be required to move to a standard size and shape of packaging to prevent them distinguishing their brands in that way, Mr. Mahoods said. He favours the older-style packs with trays that slide out of box-like shells that have space for large warnings about cancer risks to be printed on the package interior.

Mr. Cunningham pointed out that the Liberals have also promised to review the federal tobacco strategy, which expires in March of 2017, and which has seen significant financial cuts in recent years.

And he said the Tobacco Act, which became law in 1997, needs to be modernized because it does not take account such things as hookah shops, electronic cigarettes and flavoured tobacco.

As for the plain packaging, Mr. Cunningham said he believes it is inevitable in Canada and “the sooner the new Liberal government moves to implement this measure, the sooner we are going to have the public health benefit.”