It has been five years since Malaysia last had a tobacco tax increase. The 2021 budget, announced in November 2020, was an opportunity to correct this shortcoming and use one of the most cost-effective measures available to governments to reduce smoking. Instead, tobacco taxes remained static for the sixth year. The decision came in the wake of sustained media coverage which was remarkably favourable for the tobacco industry and its arguments opposing tax increases. In addition to aligning with tobacco industry framing, there was a distinct lack of public health voices in the extensive media coverage, as well as evidence of possible editorial interference to delay publication of advocacy in favour of the increase. Taken together, these issues raise questions about potential collaboration between the tobacco industry and media in Malaysia.

Starting in February 2020, regular coverage which amplified the problem of tobacco smuggling ran in mainstream media, particularly in the New Straits Times (NST). Items published throughout the year included news articles, opinion pieces, TV interviews and webinars. At least 30 articles were published throughout 2020, with several angles about smuggling and the illicit tobacco market. Themes included: that Malaysia has the worst reputation globally as the world’s largest tobacco black market, smuggled cigarettes are driving underage smoking, a BAT Malaysia-sponsored survey showing public agreement that high prices feed the black market, smokers are turning to cheaper smuggled cigarettes, Covid-19 is fuelling the illicit market, and small businesses are hurt by the illicit tobacco market.

Green Zebras, a market research company, released infographics, published in the NST, with the message that the majority of Malaysians supported the government acting on illicit cigarettes. The company did not disclose the client for this work.

Several foreign voices also weighed in which supported the tobacco industry’s messages. According to the Managing Director of Retail and Trade Brands Advocacy (RTBA) based in Melbourne, Australia, tobacco black market syndicates are exploiting weak Malaysian borders and “while high tobacco excise duty is a key factor driving demand for illicit tobacco in Australia, the supply of these contraband goods mainly comes from source countries through Malaysia.” The RTBA’s illicit trade advisor, a former law enforcement officer from Australia, offered his opinion in  the Malaysian press on how easy access to illicit cigarettes will increase youth smoking and “If products like illicit cigarettes can easily get into Malaysia and even be re-exported out to neighbouring countries, so can other dangerous items like weapons, drugs and diseases.”

According to its website, “RTBA is a coalition of businesses, retailers and trademark holders working to minimise the impact of criminal conduct of the Asia-Pacific trading environment.” RTBA’s Managing Director was previously the Director of Policy, Government and Corporate Relations at the Australian Retailers Association.

A Washington DC based group, Consumer Choice Center, urged the Malaysia government to use the 2021 Budget to implement measures to address the tobacco black market because it was becoming a serious threat to society and legal businesses. Consumer Choice Center is a lobbying group which has received tobacco industry funding.

In early October 2020 the Malaysian Finance Ministry announced it would hold weekly polls through to 1st November to gauge public opinion on the 2021 Budget. Coincidentally, the frequency of pro-industry articles on illicit trade intensified in October. Also in October, BAT Malaysia launched a ‘Stop The Black Market’ campaign, with a campaign bus which was driven around Kuala Lumpur, including near the Parliament house. The campaign was given uncritical coverage by the NST. 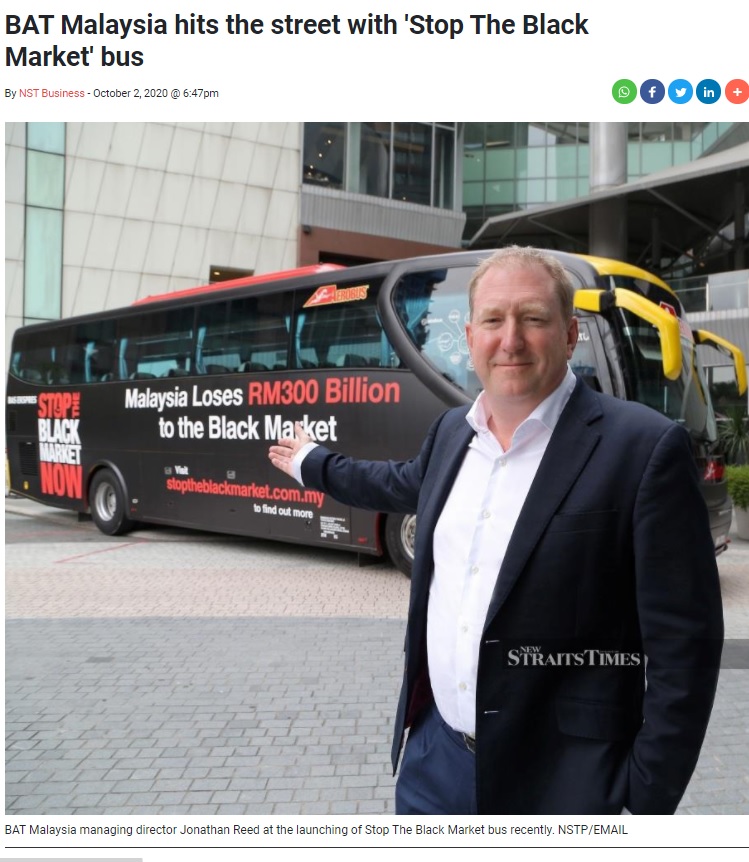 In early October, I sent a letter to the opinion page of the New Straits Times protesting BAT’s campaign bus, which is a form of sponsorship, and calling for a tax increase on tobacco to protect adolescents. It was briefly published with the headline ‘Time to increase tax on tobacco companies’, on 7 October but was pulled within several hours. In response to a query to the NST editor, the newspaper said, “We have withdrawn the article temporarily. This has to do with in-house matters. We will re-publish it in a short while.” NST’s “short while” stretched into 3 weeks before the letter was republished on 29 October 2020, towards the end of the Ministry of Finance public consultation period. (The original letter can be found on the news aggregator site MSN).

On 6 November, the Finance Minister announced the 2021 budget, which did not increase tobacco tax. Instead, it included indirect measures the government will take to tackle the illicit cigarette threat, in line with what had been advocated in the preceding media coverage.

Japan Tobacco International Malaysia immediately welcomed the 2021 Budget, especially the government’s commitment to combat illicit trade. BAT Malaysia had a similarly warm response, stating the measures would be the first step to disrupting the supply of illegal cigarettes in Malaysia. The NST continued to promote BAT’s ‘Stop the black market’ by hosting a Facebook live panel discussion n November.

Direct and indirect tobacco advertising is banned in Malaysia. However, it appears that messages from the tobacco industry and its allies are now directly transmitted by mainstream media, with few dissenting public health perspectives. Unfortunately, tobacco companies do not declare their marketing budget and sponsored programs. The lack of transparency makes it difficult to ascertain the extent of this problem.

It is time for the Malaysian government to require tobacco companies to report their marketing and promotional budget and sponsored programs. Similarly, the media must be required to disclose the nature of any collaborations with the tobacco industry. In 2020, the public was subject to an onslaught of pro-industry views. At the same time, there is a death of alternative views and one such view appears to have been censored without explanation. The public deserves to know if collaboration exists and if so, be told the full details.

Mohamad Haniki Nik Mohamed is an Associate Professor at the International Islamic University Malaysia & President of the Malaysian Association for Adolescent Health. He has no conflicts of interest to declare.

Mary Assunta, Senior Policy Advisor of the Southeast Asia Tobacco Control Alliance, provided technical input. She has no conflicts of interest to declare.