ASTUDY by a team of researchers has shown that in areas where the smoking ban was enforced, such as heritage areas in Penang and Melaka, there has been a huge improvement in air quality.

In certain places, the improvement was striking — from a “hazardous” Air Pollutant Index (API) reading to “good”.

This, it concluded, would also be the scenario nationwide following the smoking ban in eateries and restaurants from Jan 1.

The study, headed by Professor Dr Maizurah Omar of Universiti Sains Malaysia, found that it would take three years to achieve full public compliance with the ban.

Also, the ban was effective in helping people kick the habit as they saw fewer people smoking around them.

Maizurah said the study, carried out since 2009, found tobacco and smoke exposure was low in areas that had adopted a smoke-free policy, such as restaurants, offices and hotel lobbies.

The study, conducted at 85 venues in Penang subject to smoking restrictions, compared findings with entertainment areas, pubs and bars where the smoking ban was not enforced.

In October 2012, six recreational parks in Penang were declared smoke-free, with the George Town World Heritage Site following suit in July 2015, as well as Penang Hill.

Since July 4, 2015, all buildings and public spaces in the 259ha heritage site, except residential premises, were gazetted as no-smoking zones and enforcement began on Jan 1, 2016.

The study was also conducted in Melaka. 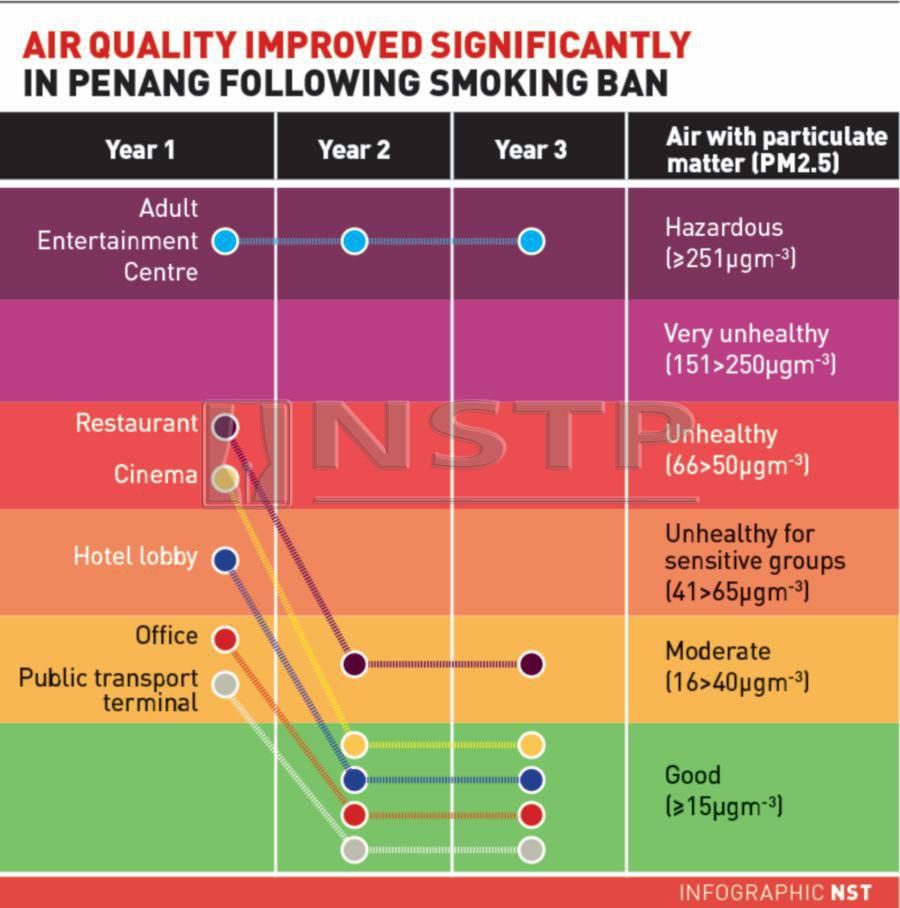 Maizurah said the API readings in areas with smoking restrictions declined, while those without the prohibition charted unhealthy to hazardous readings, such as more than 250 at entertainment centres.

In the areas studied, in the first year the smoking ban was introduced, the API readings were moderate to unhealthy, that is, from 16 to 150.

The readings were maintained in the third year.

Maizurah said the study found that in areas where the smoking ban was not enforced, there was exposure to particle matters less than 2.5 micrometre units (PM2.5).

“These particles are small enough to be absorbed into our bloodstream directly.

“It is smaller than haze particle matter at 10 micrometres (PM10).

“We found the highest level of PM2.5 particle matter recorded at entertainment centres where patrons could smoke.”

“Although PM10 carries carbon monoxide, sulphur monoxide, nitrogen dioxide and ozone, it is not able to penetrate the body as it will be blocked by our nose, hairs and masks.”

She said the study by the International Tobacco Control Policy Evaluation Southeast Asia (Malaysia) titled “Promoting Evidence-Based Strategies to Fight the Global Tobacco Epidemic” found that smokers would comply with the restriction within three years.

Maizurah said the response from smokers to the smoking ban was positive.

“The smoke-free policy is easy to be followed by smokers because they understand the restriction is to accommodate non-smokers.

“They say if fewer people around them are smoking, it will deter them from lighting up and encourage them to quit.

“Smokers from our survey said they were able to discard their habit with the smoking ban.”

She said the authorities must expand the ban to areas frequented by youth as they were more vulnerable to pick up the habit.