21 October 2013/Bangkok: The Southeast Asia Tobacco Control Alliance (SEATCA), a regional network of NGOs in the ASEAN, fully supports the Malaysian government’s proposal to exclude tobacco from the Trans Pacific Partnership trade agreement (TPP) as this step will contribute significantly to reduce tobacco use among the participating nations. The Malaysian government reiterated its tough position on tobacco and trade at the WHO WPRO Regional Committee meeting currently taking place in Manila from today to 25 October. 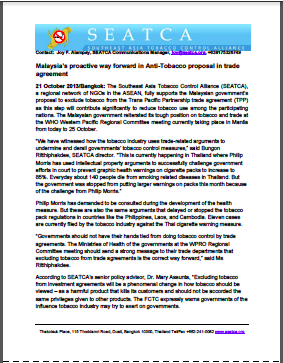 “We have witnessed how the tobacco industry uses trade-related arguments to undermine and derail governments’ tobacco control measures,” said Bungon Ritthiphakdee, SEATCA director. “This is currently happening in Thailand where Philip Morris has used intellectual property arguments to successfully challenge government efforts in court to prevent graphic health warnings on cigarette packs to increase to 85%. Everyday about 140 people die from smoking related diseases in Thailand. But the government was stopped from putting larger warnings on packs this month because of the challenge from Philip Morris.”

Philip Morris has demanded to be consulted during the development of the health measure. But these are also the same arguments that delayed or stopped the tobacco pack regulations in countries like the Philippines, Laos, and Cambodia. Eleven cases are currently filed by the tobacco industry against the Thai cigarette warning measure.

“Governments should not have their hands tied from doing tobacco control by trade agreements. The Ministries of Health of the governments at the WPRO Regional Committee meeting should send a strong message to their trade departments that excluding tobacco from trade agreements is the correct way forward,” said Ms Ritthiphakdee.

According to SEATCA’s senior policy advisor, Dr. Mary Assunta, “Excluding tobacco from investment agreements will be a phenomenal change in how tobacco should be viewed – as a harmful product that kills its customers and should not be accorded the same privileges given to other products. The FCTC expressly warns governments of the influence tobacco industry may try to exert on governments.

Guidelines to FCTC Article 5.3 of the FCTC requires governments to protect their tobacco control policies from the tobacco industry to the extent possible. Additionally Article 2 provides that new agreements entered by Parties subsequent to the FCTC should be compatible with the FCTC. The FCTC also mandates Parties to cooperate with each other in reducing tobacco use.

Growing concern over the tobacco industry’s trade litigation strategy has been documented by many health advocates and acknowledged by the WHO. In the past 3 years, the tobacco companies stood as investors to sue Uruguay and Australia, and were behind the WTO disputes against measures involving the ban on flavorings and plain packaging. A free trade agreement dispute had also been launched by Philip Morris against Norway under the European Free Trade Agreement court.

It is important that the TPP excludes tobacco as the TPP has been touted as a 21st century trade agreement that could reportedly serve as a gold standard for future trade agreements to follow. Twelve countries of the Asia Pacific Economic Cooperation (APEC) are negotiating in the TPP: Australia, Brunei, Canada, Chile, Japan, Malaysia, Mexico, New Zealand, Peru, Singapore, USA, and Vietnam.