Dr Bronwyn King is an oncologist. She is an honorary radiation oncologist at Melbourne’s Peter MacCallum Cancer 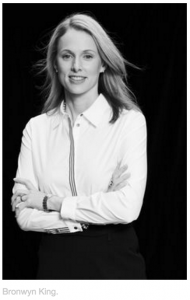 But like Clark Kent, she has another equally important job. King has rapidly become a massive thorn in the side of Big Tobacco for her rapidly proliferating efforts to promote divestment by pension funds from that industry.

There is a huge gap between lung cancer as the cause of cancer death in Australia, and that which comes in second (colorectal cancer). Lung cancer is projected to kill 11,880 Australians this year, bowel cancer nearly three times less with 4,120 and breast cancer, 3,065.

About 85% of people diagnosed with lung cancer either still smoke, quit after smoking for a long time, or didn’t smoke but lived with others who smoked.

In 1984, I helped my sister, a nurse, care for our mother as she died with cancer in her lungs. The cancer rapidly grew, depleting her ability to breathe. Over about six weeks she slowly suffocated to death, growing ever more panicked at what she knew awaited her. She was just 64, the same age as I will be next month.

One hundred years ago, lung cancer was a rare disease. The renowned US surgeon Alton Oschner recalled late in his life:

In 1919, its incidence was so rare that when I was a junior medical student in Washington University, the two senior classes were asked to witness the autopsy of a man having died of carcinoma of the lung because Dr. George Dock, Professor of Medicine, thought we might never see another such case as long as we lived. Being young and impressionable, this impressed me very much. It was not until 1936, 17 years later, that I saw my next case of bronchogenic cancer, and in a period of six months I saw nine cases. Having been impressed with the rarity of the condition in 1919, this seemed indeed an epidemic. Because all the patients were men, heavy smokers, and had begun smoking at the beginning of the first World War, and after determining that the consumption of cigarettes was relatively low in the United States until the first World War, when there was a tremendous increase, I had the temerity to predict that cigarette smoking was responsible for the increased incidence.

Lung cancer is today the world’s leading cause of cancer death. It kills many, many more from cardiovascular and respiratory diseases (some six million a year) and is forecast to kill a billion by the end of this century, on average about 12 years early.

The global tobacco industry – and governments which have failed to control it – are the vectors responsible for this epidemic.

I first met Bronwyn King about three years ago when she sought me out for advice after an epiphany she had experienced in 2010. In a routine conversation with her superannuation advisor, an innocent question as she was about to leave about investment strategy revealed that, unknown to her, her investment portfolio contained highly profitable tobacco company shares.

Within a nanosecond she realised this was exquisitely wrong and resolved to not only change this for her own situation, but to do all she could to alert her colleagues and superannuation payers at large to this iniquity.

King is something of a force of nature. In between seeing her patients, since 2012 she has personally stimulated 33 Australian pension funds to adopt completely tobacco-free investment mandates with total tobacco divestment of around A$1.8 billion. She is currently working with more than two dozen other super funds, insurers and fund managers.

In March 2015, at her urging, the Union for International Cancer Control launched the Global Task Force for Tobacco Free Portfolios to expand this initiative to a global platform. Its steering committee includes World Health Organization (WHO) officials and its honorary chair is Princess Dina Mired of Jordan. Nicola Roxon, Former Australian Minister of Health who steered plain packing through the parliament, is an advisor.

There is not a lot of evidence that divestment in itself financially harms those industries which are targeted. A 1999 study into the campaign to encourage divestment from South African banks and corporations investing in the apartheid nation found:

The main reason here is that every share divested by someone with no stomach for helping an ethical bottom feeding company is bought by another investor indifferent to anything but dividend and growth yields.

But no company or industry welcomes divestment campaigns because they are powerful magnets for highly negative publicity. Each time institutions such as churches, universities, academies or progressive companies take a decision to not invest in an industry like tobacco, fossil fuel, arms or gambling, it makes headlines.

These news stories are invariably unanswered free kicks as the institution explains the misery, environmental carnage or otherwise reprehensible consequences of the conduct of the targeted industry.

This reputational damage can have serious knock-on effects. Staff morale is eroded and many potential applicants for jobs anticipate the shame of working for such an industry.

I don’t think there’s any doubt that it’s harder to get enthusiasm for tobacco companies. There is a trend. If you have ten qualified candidates and you tell them it’s a tobacco company, five might say they don’t want the job.

In the same article a former industry employee said:

From a personal and family point of view, it just became wearing having to discuss and defend the industry at every dinner party we went to.

This inevitably greatly reduces the quality of staff prepared to work for such industries. A newly minted honours graduate from a leading business school is hardly likely to give high priority to seeking work in a pariah industry. Big tobacco has become the index case for shorthanding corporate malfeasance. If you google “just like the tobacco industry”, a Niagara of fellow travellers pour down the screen.

The tobacco industry has set the low water mark for corporate indecency and indifference to the consequences of its key performance indicators on the health of millions of people.

Like all of us, politicians consume these narratives too. One hundred and eighty nations, representing 89% of the world’s population, have now ratified the WHO’s Framework Convention on Tobacco Control which obligates signatories to implement the range of controls that Australia has had on place for many years.

With the exception of a few extremists on the fringes of politics, tobacco control has long had multi-party support in Australia. No politician other than perhaps the proudly Philip Morris-supported David Leyonhjelmwould ever want to be in a photo opportunity with the industry.

Unless you count poverty, tobacco remains the single leading discrete cause of death in the world today. Bronwyn King is one of the most outstanding of the new generation of tobacco control activists I have met. She will be a future leader.

There is a strong chance that part of your superannuation investment is being used to support tobacco companies. If this bothers you, call them up and ask about it. Many will have options that allow you to easily switch.