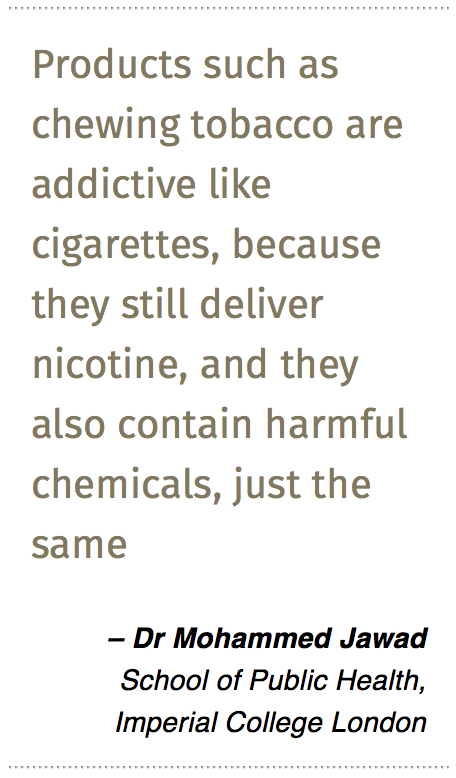 A quarter of a million deaths per year are caused by smokeless tobacco-based products, according to a new study.

Its authors say that millions more have their lives shortened by ill health due to the effects of smokeless tobacco-based products, such as chewing tobacco, snuff, snus and dissolvable tobacco. The research is the first to assess the global impact of smokeless tobacco consumption on adults.

The research was led from the University of York with collaborators at Imperial College London, the University of Edinburgh, and elsewhere. The team says that governments and public health bodies need to consider incorporating the regulation of smokeless tobacco into policy frameworks.

Dr Mohammed Jawad from the School of Public Health at Imperial College London said “We’ve all heard of the dangers of smoking and there has been plenty of research on the health effects of cigarettes. Only now can we start to put numbers on the impact of smokeless tobacco. Products such as chewing tobacco are addictive like cigarettes, because they still deliver nicotine, and they also contain harmful chemicals, just the same.”

Dr Kamran Siddiqi, senior lecturer in epidemiology and public health at the Department of Health Sciences/Hull York Medical School, said: “It is possible that these figures are underestimated and future studies may reveal that the impact is even bigger. We need a global effort to try and address and control smokeless tobacco.”

The study, which was funded by Leeds City Council and the Medical Research Council, estimates that in 2010 alone smokeless tobacco resulted in more than 62,000 deaths worldwide due to cancers of the mouth, pharynx and oesophagus and accounted for more than 200,000 deaths from heart disease.

Researchers compiled the figures using data from 113 countries and extracted from the 2010 Global Burden of Disease Study and surveys such as Global Adult Tobacco Survey. The results are published in BMC Medicine.

The team says that more research is needed in countries with high levels of consumption but where figures for the relative risk of acquiring smoking-related cancers are not available.

Dr Siddiqi said there was a hotspot in South and South-East Asia, and in particular India, which accounts for 74 per cent of the global disease burden.

He added: “Smokeless tobacco is used by almost a quarter of tobacco users and most of them live in South-East Asia. But even in this country there are communities in east London, Leicester, Birmingham, Leeds, Bradford and Birmingham using it.

“We have got no international policy on how to regulate the production, composition, sale, labelling, packaging and marketing of smokeless tobacco products.

“There is a need to build on the insights obtained from efforts to reduce cigarette smoking and to investigate strategies to reduce the use of smokeless tobacco.”