Motorists and passengers in England and Wales are being warned they will soon be breaking the law if they smoke in a vehicle carrying a person under 18. From 1 October, they face fixed penalty fines of £50 – with drivers at risk of being fined twice if they have failed to stop a passenger smoking and are smoking themselves. 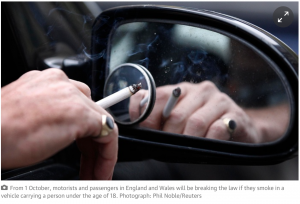 The Department of Health is stepping up publicity to increase awareness of the new rules seven weeks before they are introduced to prevent a surge in fines.

The chief medical officer, Dame Sally Davies, said: “Children breathe faster than adults so they are much more exposed to the dangers of second-hand smoke. Their airways, lungs and immune systems are still developing so are much more at risk from harm.

“We want children to grow up free from harm and we need parents to understand why smoking in vehicles is so dangerous. 80% of smoke is invisible so even if you think you are being careful you cannot see where the smoke is going.”

Jane Ellison, a health minister, said: “Research has shown that around a third of children who are exposed to smoke in vehicles don’t feel able to ask the person to stop because they feel frightened or embarrassed. We want all children to grow up free from the burden of disease that tobacco brings.”

The government says surveys suggest about a third of children – 3 million – are exposed to smoke in vehicles. Officials also believe about 200 children a week visit GPs because of the effect of second-hand smoke in cars.

The exposure to toxins could result in diseases such as bronchitis, pneumonia, meningitis and cancer, they say.

Fixed penalty notices can already be issued for breaches of bans on smoking in enclosed public places, while smoking in work vehicles and on public transport is already banned. But the new health measures potentially represent a big extension of the powers of police and of staff working for local authorities.

Private cars, except convertibles and coupes with their roofs fully down and stowed, will have to be smoke free if they carry anyone else but the driver. Smoking in a car with an open sunroof will still render adults liable to fines if there are under-18s aboard, though a 17-year-old who is smoking alone in a private vehicle will not be committing an offence.