There has been an increasing number of vape-related illness lately and here’s another one to add to the list!

Vaping is touted as a healthier alternative to cigarettes and for most, it is the first step to quit the bad habit of smoking. However, vaping itself has been associated with multiple illnesses, such as this 34yo M’sian who was hospitalised for fluid and fungus in his lungs after switching to vape for 2 weeks.

Another Malaysian, Wan Muhamad Amirul also recently suffered an ailment, although less severe, which he also associated with vaping. In a Facebook post that has since viral with over 5.5k shares and rising, he detailed how he had to spend a whopping RM20,000 to remove his tonsils and a tumour in his nose which was caused by vaping. Yikes! 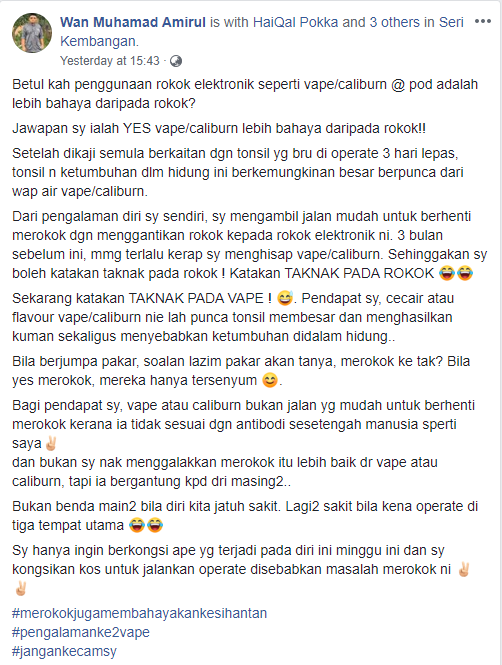 Wan details how he started to use vape and Caliburn to help with quitting smoking some 3 months ago, which he believes led to the tonsil growth. Furthermore, after successfully saying no to cigarettes, he now is planning on quitting vaping altogether after experiencing health-related issues after switching to the electronic device.

In fact, he went as far as to say that e-cigarettes such as vape and Caliburn pods are much more dangerous than cigarettes!

He also shared that vaping is not an easy shortcut everyone can take to quitting smoking as the liquid vapour may not mix well with one’s antibodies, such as what happened to him. Wan further commented:

“It is no longer something humourous when you fall ill. What’s more, it’s EXTRA PAINFUL when you have to operate at 3 major body parts!”

Wan ends his post with a reminder to all smokers and vapers out there that these habits are clinically proven to cause health issues and how expensive the hospital bill would be for vaping and smoking-related health issues. He then shared his RM20,000 operation bill to prove his point below: What do you make of Wan’s viral post? Should vaping be regulated and not be used as a way to quit smoking due to the risk that it may pose? Share your thoughts with us in the comments section!