Tobacco packs in Nepal now have 90 per cent of their surface area covered with hard-hitting pictures of the health impacts of tobacco use – the strongest tobacco control measure of its kind in the world. Shelves have been stacked with the new packs since the directive came into force earlier this month.

“Graphic health warnings are so effective because they grab attention, creating both an unfavourable association with tobacco smoking and a motivation to quit,” said Dr Tara Singh Bam, The Union’s Tobacco Control Advisor for South-East Asia. “They send life-saving health communications across the population regardless of socioeconomic status, ethnicity, culture and language.” 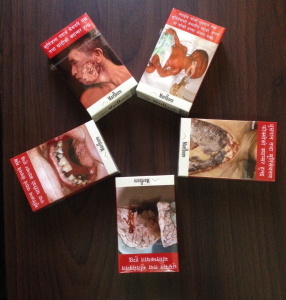 Pictures of the health impacts of tobacco use are particularly effective where literacy rates are low, or multiple languages are used. They are also proven to significantly deter young smokers, who make up 20 per cent of the total youth population in Nepal, one of the highest percentages of young smokers in South-East Asia.

Around 38 per cent of men and 17 per cent of women in Nepal smoke tobacco daily, and almost 16,000 people in Nepal die every year from tobacco-related causes.

Nepal’s newly implemented directive is now the strongest in the world – even Australia’s ‘plain’ tobacco packs have 82.5 per cent coverage (75 per cent of the front and 90 per cent of the back of packs), although they also remove any branding. Thailand and Uruguay follow closely behind, requiring between 80-85 per cent of all tobacco packaging to be covered by graphic health warnings (GHWs).

“The 90 percent pictorial health warnings in Nepal will strengthen regional and global motivation and commitment to making more progressive efforts at the country and regional level,” said Singh Bam. “It also gives the strong message that a life-saving public health agenda will always win the fight against the corporate interests of the giant tobacco industry and business groups.”

Less than two years ago Nepal’s 75 per cent warnings were contested by the tobacco industry – a legal battle they lost in the Supreme Court. Despite significant pressure from the tobacco industry, which bears the burden of implementation in having to print the new packets, Nepal has remained committed to its strategy for protecting public health.

“In implementing 90 per cent graphic health warnings, Nepal sets a powerful example to other countries in the region in standing up against tobacco industry interference,” said Dr Ehsan Latif, Director of The Union’s Department of Tobacco Control. “This strong stance will hopefully motivate its neighbours, India and Pakistan, who are currently battling to have similar laws implemented. Tobacco industry obstruction is fierce because this measure is so effective.”

The Union has been supporting the Nepalese government to develop and implement its tobacco control strategy since 2009.  In 2011 the Tobacco Control and Regulatory Act was introduced – a strong raft of measures based on the World Health Organization’s MPOWER programme to reduce tobacco use.

Here is an English translation of the Directive, though this document does not include mockup illustrations as to how package warnings are to appear on packages (but the text of these warnings is translated to English): http://www.tobaccocontrollaws.org/files/live/Nepal/Nepal%20-%2090%20Percent%20Warning%20Directive%20%282014%29.pdf