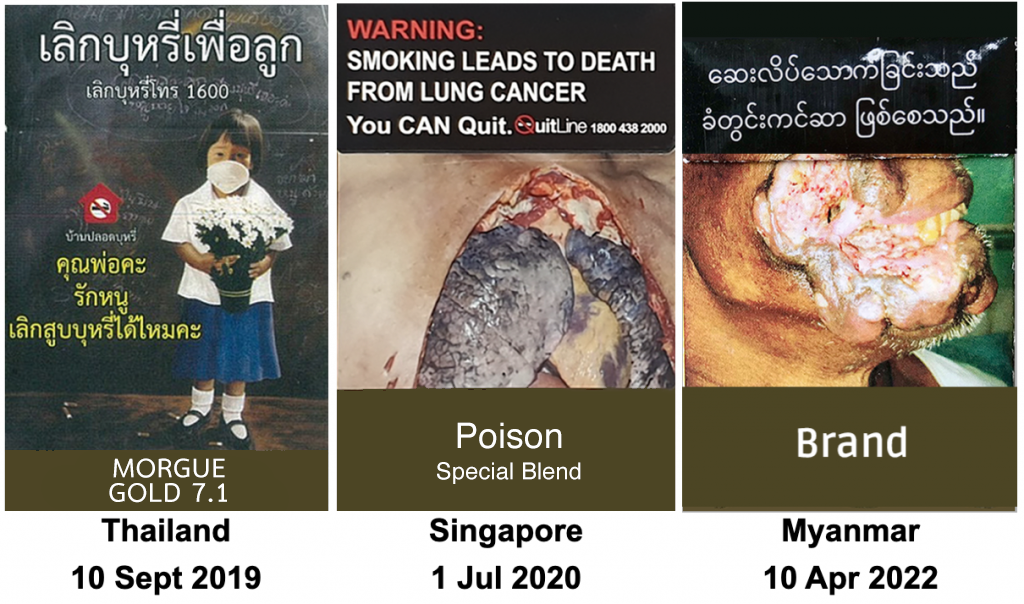 (Bangkok, 11 Nov 2021) The Cigarette Package Health Warnings: International Status Report, released by the Canadian Cancer Society on 9 November, shows all 10 ASEAN countries are among the 134 out of 206 countries and jurisdictions across the world that now require pictorial health warnings on cigarette packaging, covering 70% of the world’s population.

There are now 134 countries in the world requiring pictorial health warnings on cigarette packaging, an increase from 117 in 2018. (Photo from the Cigarette Package Health Warnings: International Status Report.) 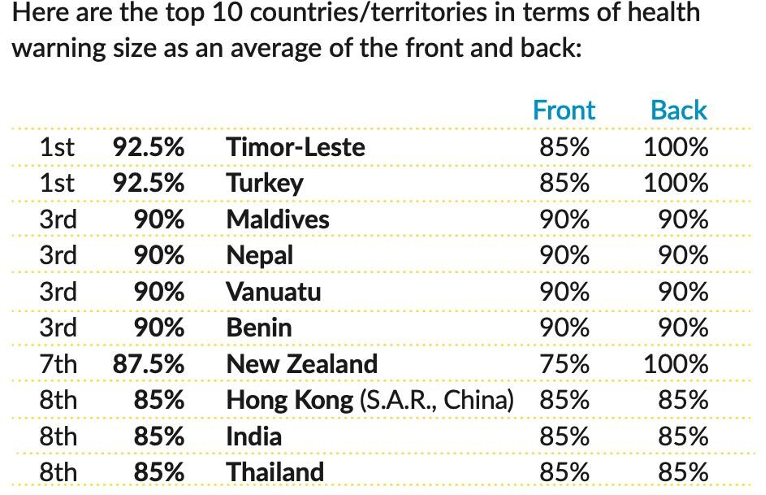 Across the world, Timor-Leste and Turkey has the largest warning size in cigarette packages with 92.5% of the total packaging area bearing health warnings. (Photo from the Cigarette Package Health Warnings: International Status Report.)

These are positive developments, according to the Southeast Asia Tobacco Control Alliance (SEATCA). “Large and prominent pictorial warnings are a cost-effective means to raise awareness on the harms of smoking and discourage tobacco use. Standardized tobacco packaging not only increases the prominence of health warnings, but also prevents the tobacco industry from using attractive colors and images and misleading messaging to promote and market its harmful products, said SEATCA Executive Director Dr. Ulysses Dorotheo.

“This report shows significant improvement from 2018, but the battle is far from over. As governments meet this week for the ninth Conference of Parties to the WHO Framework Convention on Tobacco Control (FCTC), we must remain vigilant to anticipate and address the tobacco industry tactics and interference to promote their vested interests,” Dorotheo added.

Article 11 of the WHO FCTC mandates Parties to effectively regulate packaging and labelling of tobacco products.

SEATCA is a multi-sectoral non-governmental alliance promoting health and saving lives by assisting ASEAN countries to accelerate and effectively implement the tobacco control measures contained in the WHO FCTC. Acknowledged by governments, academic institutions, and civil society for its advancement of tobacco control in Southeast Asia, the WHO bestowed on SEATCA the World No Tobacco Day Award in 2004 and the WHO Director-General’s Special Recognition Award in 2014.