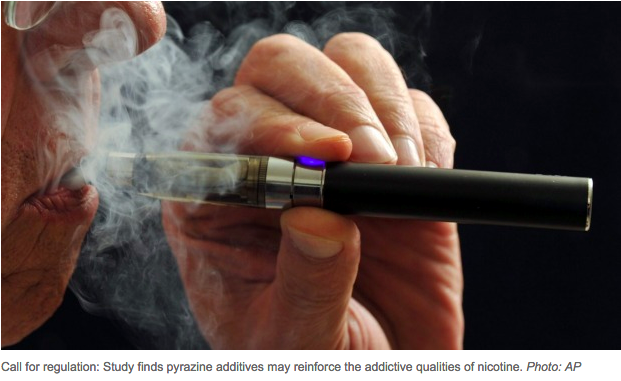 A new study has found a chemical additive commonly found in e-cigarettes could play a role in tobacco dependence and increase the attractiveness of smoking amongyouth.

The study, published in the Tobacco Control journal, examined the role of pyrazine additives and found they may reinforce the addictive qualities of nicotine and should be strictly regulated.

The research comes as the ACT Government continues to deliberate potential changes to the use and sale of e-cigarettes after receiving more than 240 public submissions.

According to the researchers, who are based at Harvard University,pyrazines are among the most important compounds characterising the flavour and aroma of tobacco and tobacco smoke.

In a statement, the researchers said “pyrazines appear to increase product appeal and make it easier for non-smokers to initiate smoking, more difficult for current smokers to quit, much easier for former smokers to relapse into smokingand may mask the risks of both active and passive smoking”.

The report also found pyrazines could increase the attractiveness of smoking, particularly among youth.

“The sensory inputs of pyrazine flavour additives might also provide cues for reward-related learned behaviours and could play a critical role in the development, maintenance, and relapse of tobacco dependence,” they said.

The report argued that the tobacco industry had long been interested in maximising the attractiveness, appeal and low-health risk perceptions of tobacco in a competitive US market.

“To that end, manufacturers have researched and designed cigarettes with constituents that act independently of as well as synergistically with nicotine and may enhance abuse potential,” the report said.

A number of ACT-based organisations have called on the government to reform the existing e-cigarette legislation, with ACT Health continuing to assess public submissions.

The Cancer Council has cited “an urgent need for regulation” with e-cigarette use growing in popularity with teenagers, “despite the health and social impacts remaining unknown.”

“Children are at particular risk of the potential harms of electronic cigarettes, which are designed to be inhaled into the lung and have not been subject to appropriate safety assessment,” read their submission to government.

Canberra Council Australia Tobacco Issues Committee chairwoman Kylie Lindorff said she called on the ACT government to not only restrict e-cigarettes for minors, but ban their sale completely.

But E-cigarette manufacturer Nicoventures, which was established by British American Tobacco in 2010, welcomed the review of e-cigarette regulations.

“The fact that there have been a vast number of submissions shows the need for the government to act and make e-cigarettes legally available to smokers wishing to quit or reduce their tobacco intake,” said director of regulatory and medical affairs Stephen Jenkins.

“To help smokers wishing to quit or reduce their tobacco intake e-cigarettes should be as freely available as nicotine replacement therapies such as patches and gums and as well as tobacco products.”