North Korea, one of the last bastions of free, unhindered smoking, a country where just about every adult male can and does light up almost anywhere he pleases and where leader Kim Jong-un is hardly ever seen without a lit cigarette in his hand, is now officially trying to get its people to kick the habit.

It’s a battle Pyongyang has tried before and won’t easily win, especially since, beyond some stepped-up propaganda, it doesn’t appear to have a lot of funding.

But this time around, the effort does have one big thing going for it: the increasingly vocal support of North Korean women, virtually none of whom smoke.

“I’ve been on TV, my whole family has been on TV, so everyone knows who I am,” Ri, flanked by no-smoking posters, told The Associated Press during an interview at the small anti-smoking centre she manages in Pyongyang. 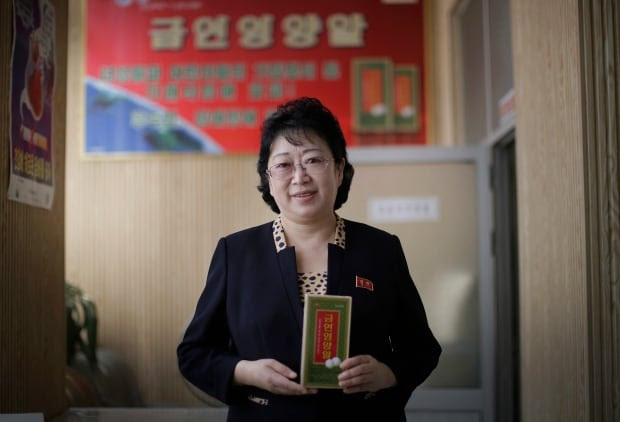 Ri Yong Ok, a 57-year-old pharmacist whose heavy-smoking husband nearly died of lung cancer, poses with a box of anti-smoking medicine she developed at a small anti-smoking centre she manages in Pyongyang. (Wong Maye-E/Associated Press)

The centre, one of only 11 in all of North Korea, has something you almost never see in the North — a no-smoking sign placed prominently above its entrance.

“I’m optimistic that we can get people to stop,” she said. “Our goal is education.”

The potential health benefit to the nation could be tremendous.

Ri estimated about 54 per cent of adult male North Koreans smoke — a higher figure than the 43.9 per cent given by a World Health Organization report released at the end of 2014. Smoking is a social taboo for women and it’s illegal for anyone under the age of 17. A North Korean soldier smokes along the bank of Yalu River near the North Korean town of Sinuiju. (Jacky Chen/Reuters)

North Korea has toyed with the idea of pushing harder to get smokers to kick the habit before — Ri’s humble anti-smoking centre has been around since 2007. But it has stepped up its effort to at least provide more education of smoking’s health risks since an anti-smoking decree was made by Kim in April.

The start of the new drive prompted speculation in the foreign media that Kim himself had quit, since cigarettes were conspicuously missing from his hands in photos carried by the state media of his “on-the-spot guidance” visits around the country from around that time.

The buzz didn’t last long. He was pictured smoking on a visit to a children’s camp in June. 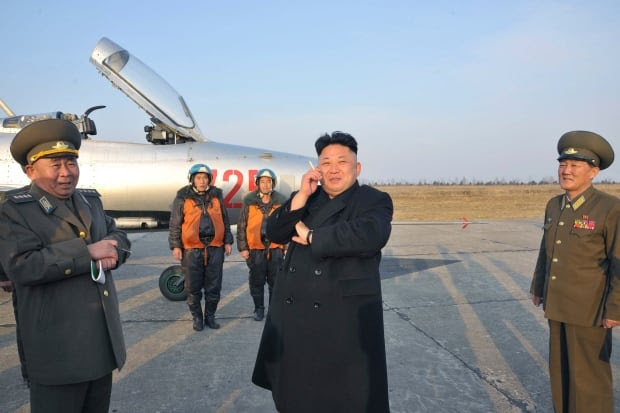 North Korean leader Kim Jong-un smokes as he attends a flight exercise in this undated photo released by North Korea’s Korean Central News Agency. The dictator is often pictured with a cigarette in his hand. (KCNA via Reuters)

North Korea joined the World Health Organization’s Framework Convention on Tobacco Control in 2005 and dutifully holds events on World No Tobacco Day every year. The infomercial on Ri and her family was broadcast by state-run TV on that day this year and a big anti-smoking poster for no smoking day hangs in her offices.

According to recent government reports, the country has reduced the amount of land devoted to growing tobacco. In May, state media quoted a Health Ministry official saying the ratio of male smokers in 2013 was down eight per cent when compared with 2009 and “the number of nonsmokers is remarkably increasing with each passing day.”

“I would guess about 300 people visit smoking cessation centres a day, nationwide,” in a country with a population of about 24 million, Ri told AP.

Cigarettes are a big business in North Korea.

Unlike many other consumer products, the array of domestically produced brands that are available to the public is amazing — from the status-symbol 727s (which take their name from the anniversary of the armistice that ended the Korean War) to brands like Pyol (Star), Craven and Tazo (which means ostrich and features the bird on every pack).

Menthol cigarettes are essentially non-existent but, because of the heavy competition among makers, gimmicks abound — one kind of Pyongyang-brand cigarette has filters tipped with smiley faces. Another brand is now putting flavored balls in its filters that when popped give the smoke a vaguely fruity taste. 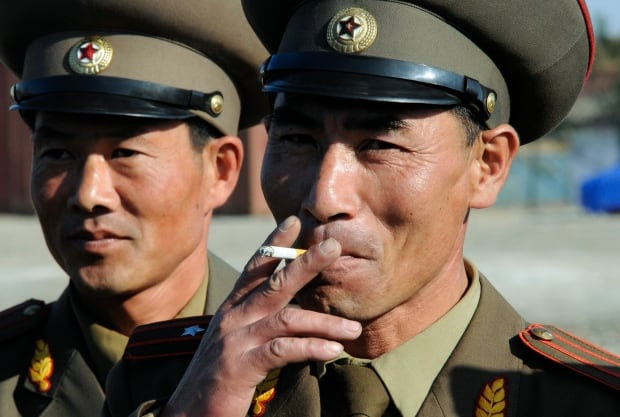 North Korean officers attend a ceremony marking the beginning of the construction works of the Khasan-Rajin railway line at the Tumangan border crossing. (Yuri Maltsev/Reuters)

Prices range from around US $5 for the 727s and $7 or so for the popular Japanese Seven Star brand — despite international sanctions on luxury good exports, it’s easy to obtain imported cigarettes in Pyongyang — while Ostrich and other typical domestic smokes go for $1 or less a pack.

Some smokers roll their own blends, a practice that is more common in the countryside. Though the possibility can’t be ruled out, the sight of people puffing away on paper-rolled, odd-smelling mixtures of tobacco and whatever else they can stuff in with it may contribute to persistent but unsubstantiated reports by visitors and foreign media outlets of widespread marijuana use.

Health warnings are now required on cigarette packs, but remain inconspicuously placed in small lettering on the side of most and only state that smoking can be harmful to the health. A similar warning is posted in the smoking area at Pyongyang’s new international airport, though most smokers probably don’t see it — they just go outside.

Even so, the media campaign and pressure from wives, daughters, mothers and girlfriends does appear to be paying off, at least a little. 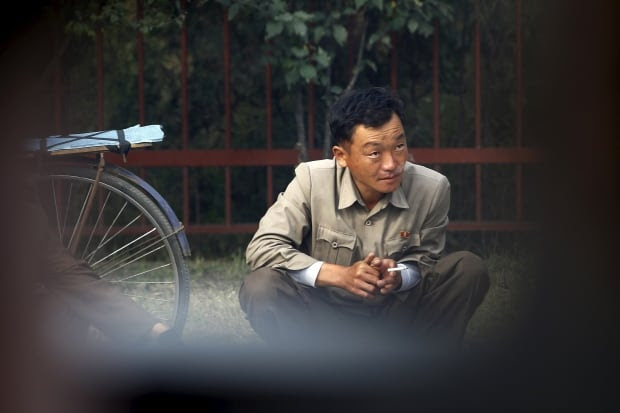 A man smokes a cigarette in downtown Pyongyang. (Damir Sagolj/Reuters)

Yun Jin, a 27-year-old IT worker, said he made the decision to kick the habit after he saw Ri on television.

“I started smoking when I was a university student and smoke about 10 cigarettes a day,” he said before a consultation at Ri’s cessation centre. “My mother wants me to quit, but it’s my decision.”

Consultations at the centres are free, in keeping with North Korea’s policy of providing free health care to its citizens. Medicines intended to help them quit are not covered, however.

Ri, being a pharmacist, has developed one such medicine. Brightly coloured boxes of it — a 10-day supply of 21 lozenges goes for $10 a pop — cover one of the walls of her center. She boasts that, being entirely made of traditional Korean mountain herbs and medicinal plants, “it’s the best in the world.”

“There are many anti-smoking medicines around the world, but they contain nicotine, so ours is better for quitting,” she said. “But in the end, the most important thing is to really make the decision to quit.”