The Making Healthier Choices Act passed with the near widespread support of the three parties in a 99-1 vote. Conservative MPP Randy Hillier acted as the sole opposition.

The legislation prohibits the sale of e-cigarettes to those under 19, makes their use in non-smoking areas illegal and forbids vendors from advertising or promoting their sale.

Its very clear that these things are the greatest harm-reduction devices that have been created to reduce the harm of tobacco, a disappointed Hillier said in an interview after the vote. For the government to be a barrier and impediment, I find tragic and devastating.

The flavoured tobacco ban and the calorie counts will be in place by Jan. 1, 2017, but changes could be made to the e-cigarette portion of the bill.

The provinces associate health minister called e-cigarettes an emerging technology and says Ontario is leaving the door open to the possibility they can help some smokers break their addiction.

Dipika Damerla said if Health Canada approves them as cessation aids, the act can be changed through regulation to treat them as stop-smoking products in terms of where they can be sold and displayed. 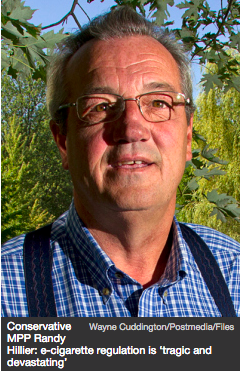 NDP health critic France Gelinas acknowledged that there isnt enough evidence about the possible adverse health effects of e-cigarette smoking, and the results of four ongoing studies in Ontario could result in changes to the bill.

But she supports regulation and thinks e-cigarette use contributes to the normalization of smoking.

I remember lighting cigarettes for clients in hospital beds. You would never think of that now, said Gelinas, a former physiotherapist. Bringing e-cigarettes into bars and restaurants re-normalizes smoking. We have already been down that road, and Im not interested in going down that road again.

One expert, however, argues that e-cigarettes can actually help tobacco smokers quit by giving them a healthier alternative that still provides a source of nicotine.

David Sweanor, a law professor at the University of Ottawa and an expert on tobacco and nicotine, said the regulation of e-cigarettes could actually be more harmful to society.

Its really forcing Ontarians to continue smoking cigarettes rather than moving them to products that would be massively less hazardous, Sweanor said. You take people who are trying to quit smoking, and by policy, you make them go hang out with smokers.