SEATCA joins renowned organizations in tobacco control in expressing concern over the tobacco industry’s sponsorship in the 26th International Conference on the Future of Asia.

The letter reminds the secretariat of the event that the presence and speaker representation of companies including Philip Morris Japan and Philip Morris International may lead to regional leaders unknowingly violating the stipulations of the World Health Organization Framework Convention on Tobacco Control.

Secretariat of the 26th International Conference on the Future of Asia

We, the undersigned, are writing to express our concern regarding tobacco industry sponsorship and speaker representation in the 26th International Conference on the Future of Asia. We ask you to end your agreements with Philip Morris Japan (PMJ) and Philip Morris International (PMI) to align the event with good governance and the UN Sustainable Development Goals and to protect the reputations of your most high-profile speakers.

Tobacco advertising, including company names, is restricted or banned in many Asian countries. By emblazoning PMJ’s logo across your website and materials, you may be undermining national laws and promoting an industry that causes social, environmental, health and economic harm across Asia. Globally, US$1.4 trillion is lost to tobacco use every year. You also risk creating the misleading impression that dignitaries and heads of state speaking at the conference endorse PMJ and the wider tobacco industry.

By sharing a stage with PMI’s new CEO, Jacek Olczak, prestigious regional leaders may be unknowingly led into violations of their country’s commitments under a global treaty – The World Health Organization Framework Convention on Tobacco Control (WHO FCTC). The treaty requires they limit unnecessary interactions with the tobacco industry. Most countries also support the U.N. Sustainable Development Goals, which commits them to implement the treaty in full. It reflects poorly on this event and Nikkei to place these speakers in such a difficult position.

Concern about tobacco industry involvement goes further than just political attendees. A recent event on Science Diplomacy, organized by Foreign Policy, was cancelled when other speakers from academic, diplomatic and intergovernmental organizations pulled out after discovering that they were expected to share a platform with a speaker from PMI. Additionally, efforts by PMI to buy a presence on the side-lines of the World Economic Forum–it is excluded from the Forum itself-were also called out by Adrian Monck, of the WEF managing board, among others. Have other speakers confirmed to you that they are willing to share a platform with the tobacco industry?

Why is Nikkei providing the tobacco industry with unwarranted credibility, now?

Based on publicly available information dating back to 2010, we have not found a record of prior tobacco industry participation in the Future of Asia conference. If the rationale for change is based on PMI and PMJ’s corporate transformation narrative, analysis suggests this positioning is the latest tactic in PMI’s strategy to influence policymakers, change public perception and side-line Ministries of Health and the WHO. How is this a credible partner in efforts to recover and re-build healthier, stronger economies, post-COVID?

By engaging your conference, PMI may be seeking favorable brand exposure and media coverage, to facilitate more favorable markets across Asia for its products and to distract from inconvenient truths and allegations:

• it manufactures hundreds of billions of cigarettes annually and is increasing cigarette production in certain countries: waiting for PMI to quit cigarettes is a fool’s game

• it works to prevent the adoption of evidence-based policies to reduce the use of a product that is scientifically proven to be harmful to health. There still is no safe way to consume any form of tobacco

• it has a long-standing history of manipulating science and is linked to the spread of misinformation during the COVID pandemic, with PMI-funded researchers (via its Foundation for a Smoke-Free World) publishing a now-retracted study that sought to claim tobacco may have a protective effect

• its products harm the environment and global economy and it is part of an industry that allegedly profits from tobacco growers living on poverty wages, working with a toxic crop and from poor tobacco users, trapped in cycles of poverty and ill health

• claims have been made that the industry has minimized its contributions to government coffers, while families, businesses and governments are left to count the economic cost of tobacco use, including loss of income, health care costs and productivity losses

• it targets the next generation – the real future of Asia – with a deadly product.

You are enabling PMI to align itself with The Future of Asia, after a pandemic that shone a spotlight on the personal, social, business and economic costs of disease and avoidable death. Each death from COVID-19 is a tragedy, as is each preventable death from the ongoing tobacco epidemic that continues to kill more than eight million people every year–many of them in their most economically productive years.

The tobacco industry has already driven an epidemic – of tobacco use and related harm – across Asia. This industry represents a risk to Asia’s future and should be held accountable, not rewarded. Tobacco companies, including PMI and PMJ, are not credible partners in health, development, COVID recovery or discussions on building a healthier and stronger future. Their involvement here allows them to exploit the trusted brands of Nikkei and the International Conference, while exposing both to reputational risk. Will politicians and other stakeholders trust you in subsequent years, if you knowingly place them in a difficult or unwelcome position in 2021?

There is still time for Nikkei to act responsibly and show true leadership on this issue, providing a platform for facts and honest debate rather than tobacco industry spin. We respectfully request that you end PMJ’s corporate sponsorship of your conference and remove Jacek Olczak from the programme.

The undersigned organizations and individuals 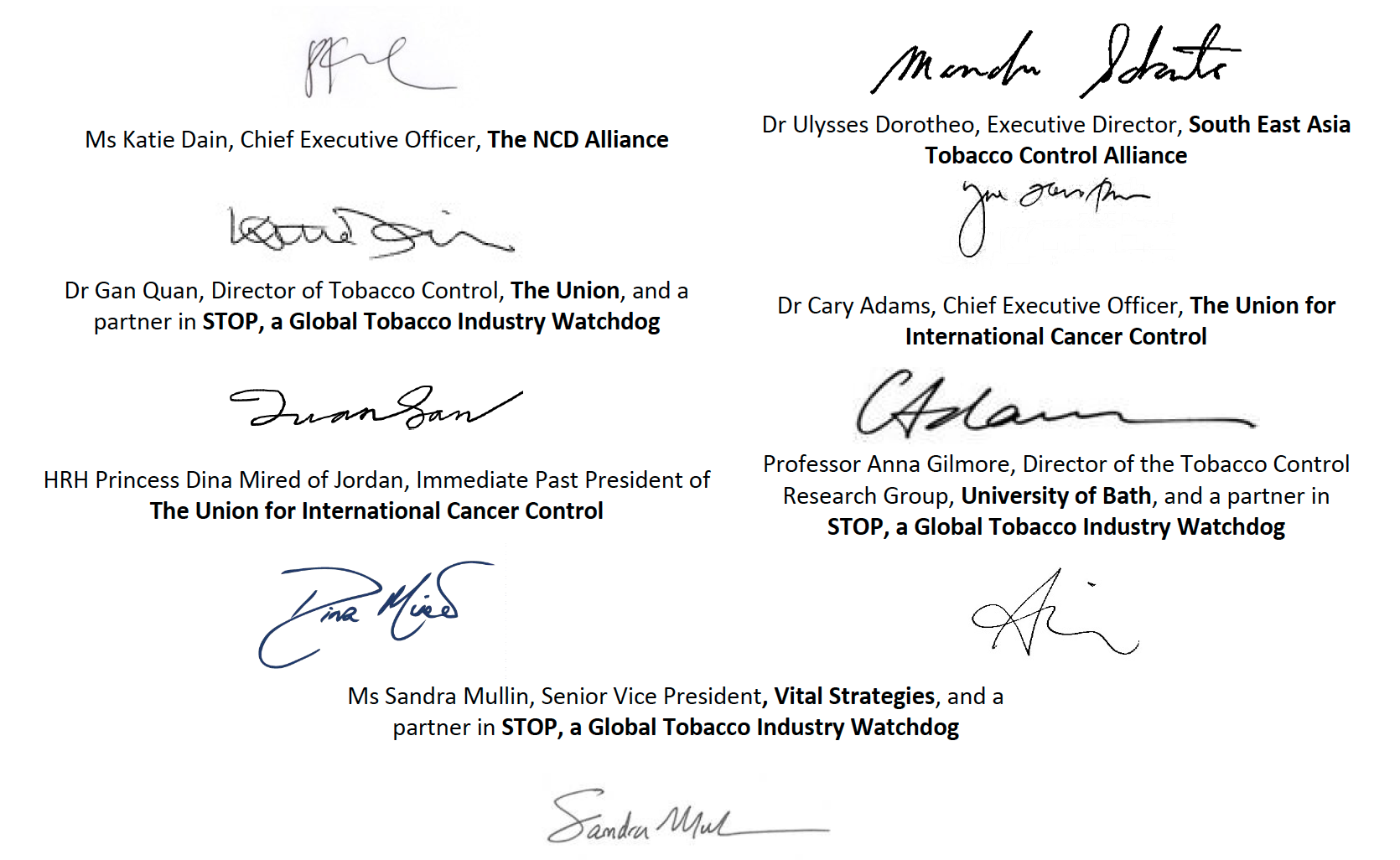