SINGAPORE: Stores will be banned from displaying tobacco products, after changes to the Tobacco (Control of Advertisements and Sale) Bill were passed on Monday (Mar 14). 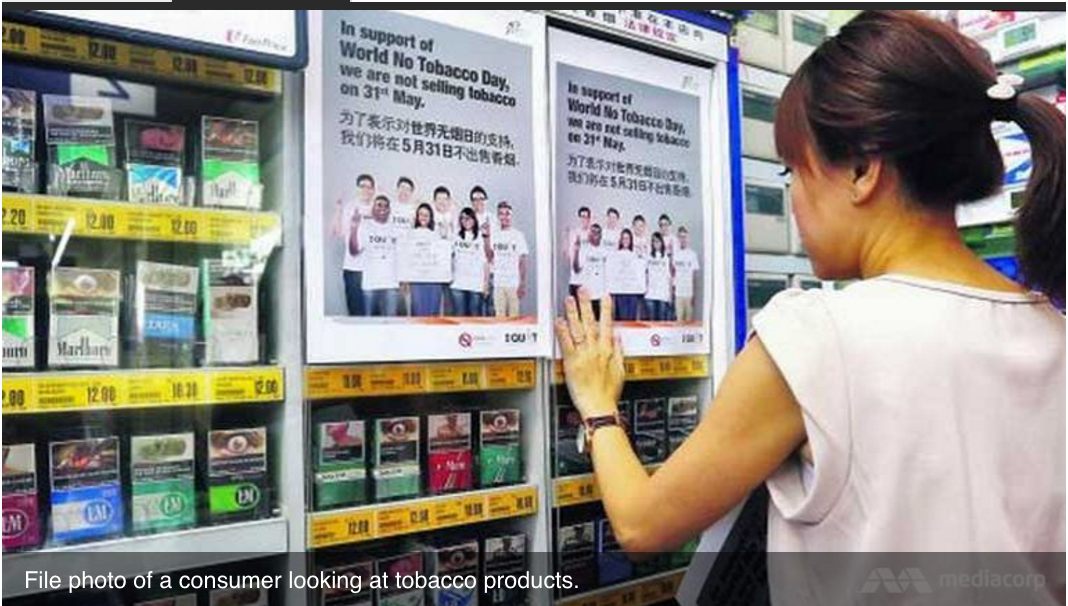 This is aimed at “de-normalising” tobacco use, and reducing the exposure of non-smokers – especially youths – to the advertising effect of point-of-sale tobacco product displays, Senior Minister of State for Health Dr Amy Khor said in Parliament.

The ban will apply to all tobacco products, including cigarettes, cigars, beedies (thin cigarettes wrapped with a leaf), and ang hoon (loose tobacco leaves). Under the new rules, general tobacco retailers will be required to use storage devices to keep tobacco products out of the direct line of sight of customers.

Dr Khor added that countries that have successfully introduced such a ban include Australia, Canada, Iceland, New Zealand, Thailand and the United Kingdom.

With the changes, retailers will have to use a text-only price list to communicate the tobacco products on sale with customers. Retailers will be allowed to publish the price list in each of the four official languages.

“Display of the price list is allowed only upon customers’ request, and its appearance will be prescribed by MOH (Ministry of Health),” said Dr Khor. “It should be in text printed on white A4 paper, and contain only the necessary information on the product, such as brand and variant, price and barcode, and stock number. There should be no pictures or logos. We will also control the font size.”

Tobacco retailers will be given a one-year grace period before the point-of-sale display ban takes effect, said Dr Khor, adding that the Government has engaged the retailers extensively since 2014.

With the changes to the Bill, an existing ban on electronic nicotine delivery systems (ENDS), or e-cigarettes, will be extended to newer varieties that may not necessarily physically resemble cigarettes or other tobacco products.

“The ban will also extend to the components of such products, to prevent such products from being imported in parts, and reassembled thereafter,” said Dr Khor. Advertising these imitation tobacco products will also be prohibited.

In addition, there will be a comprehensive ban on cross-border advertising, promotion and sponsorship of tobacco products on all media, including the Internet. This applies to advertisements originating from outside Singapore, even if targeted at persons outside Singapore.

Dr Fatimah Lateef and Dr Tan Wu Meng asked MOH to consider banning those born after a certain year from buying tobacco. A cohort ban like the “Tobacco-Free Generation policy” will result in fewer smokers over time, while not disadvantaging existing smokers, said Dr Tan.

In response, Dr Khor clarified that MOH will not pursue a cohort ban “for now”, as such a ban “will be easy to circumvent, and enforcement is going to be challenging and likely to be resource-intensive”.

Dr Chia Shi-Lu and Ms Lee Bee Wah proposed raising the minimum age at which people can use or purchase tobacco products to 21 years, from the current 18. Dr Chia also suggested moving a step beyond the point-of-sale display ban to expedite the introduction of plain packaging for tobacco products.

Dr Khor said these two suggestions are currently being studied by the Government in an ongoing public consultation that will end on Mar 29.