‘The real reason that people start smoking is not because of the pack,’ Imperial Tobacco says

The Liberal government has passed a sweeping overhaul of the country’s tobacco laws — legislation that will formally legalize (and heavily regulate) vaping and give Health Canada the powers it needs to mandate plain packaging for cigarettes.

The bill, S-5, is one of the most ambitious overhauls of the Tobacco Act in a generation. It enacts changes that have prompted vocal opposition from the country’s largest tobacco companies — and their allies, like convenience store owners — who are steadfastly opposed to measures that will force them to remove their brands from cigarette and other tobacco packages.

The bill doesn’t dictate exactly how plain packaging should be imposed, but a Health Canada backgrounder says the new Tobacco and Vaping Products Act will “provide … a range of options such as standardized colour, font and finish, and prohibitions on promotional information and brand elements, such as logos.”

A spokesperson for Health Canada did not say exactly when the new regulations would land, but added such regulations typically come into force 180 days after they are finalized by the department.

The bill’s defenders have said these new regulations will make smoking less appealing by all but eliminating the uniqueness of particular brands, and help end an “epidemic” of tobacco-related deaths — which the government suggests number over 45,000 per year.

Under existing regulations, branding is already quite limited because health warnings cover roughly three quarters of a traditional cigarette pack.

What the bill does:

“The real reason that people start smoking is not because of the pack. There is no evidence of that in every piece of research that Health Canada has cited,” Eric Gagnon, the director of government relations at Imperial Tobacco Canada, said in an interview with CBC News.

“The people who start smoking do not see a package today and say, ‘Well, this package has red on it. I think I’m going to start smoking.’ That’s not the way it works … It’s more of a PR initiative than anything else.”

The packages on the left are what cigarette packs used to look like in Australia before a plain packaging law was passed. The new plain packages are shown on the right. Canadian lawmakers hope to emulate, at least in part, the cigarette packaging strategy pursued by Australia. (David Hammond/University of Waterloo)

But Rob Cunningham, a policy analyst at the Canadian Cancer Society, said he thinks the tobacco industry is upset by plain packaging for a good reason.

“Of course plain packaging would be effective. Why else would the tobacco industry be so opposed?” he said.

“The package is the most important type of tobacco advertising that remains in Canada today. Tobacco is addictive and lethal, and should not be sold in packages made to be more attractive, period.”

“It’s too early to say because we haven’t seen the regulations, but it is one of the avenues we’ll have to look into if we believe the government is going too far,” he said. “It’s not off the table.”

Plain packaging rules are already in place, with some variations, in Australia, France, the United Kingdom and Ireland. A legal challenge by tobacco firms in the U.K. was rebuffed by that country’s highest court. 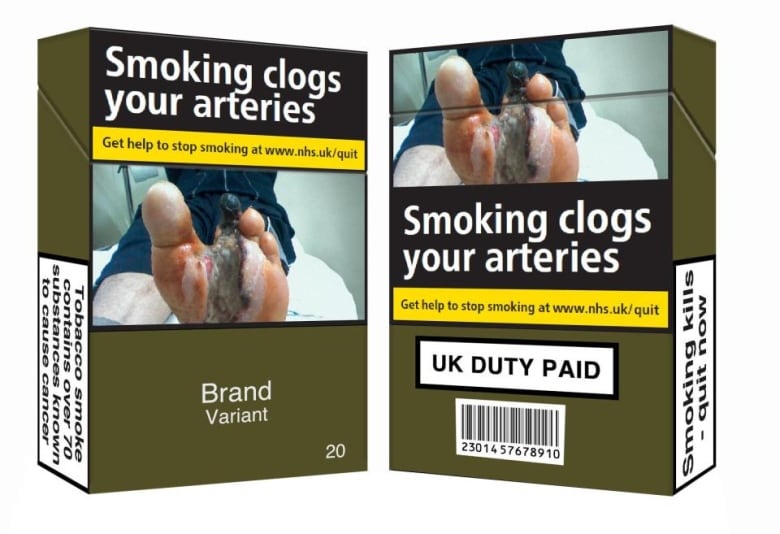 A sample of plain packages used in the United Kingdom. (Action on Smoking and Health UK)

The Liberal government has pitched the other major component of the bill — new regulations for vaping devices — as a tool to move adult smokers away from traditional cigarettes, while giving them access to the nicotine they crave.

“Bill S-5 will also provide adults the legal access to better-regulated vaping products. These products can serve as a less harmful alternative to cigarettes and can be a much-needed option for those who have been unable to quit smoking,” Peter Harder, the government’s representative in Senate, said in a recent speech on the bill.

Independent Quebec Sen. Chantal Petitclerc, the bill’s sponsor in the upper house, called regulated vaping “an important tool” for ensuring “a less harmful source of nicotine” as the government looks to cut the percentage of the population that smokes from the current 15 per cent to less than 5 per cent by 2035.

The vaping industry has been operating largely beyond the reach of regulators since e-cigarettes emerged as an alternative to smoking some ten years ago.

The e-cigarette — a battery-powered device that looks like a traditional cigarette — delivers inhaled doses of nicotine-containing vapour. Until now, vaping products have been sold under a lighter regulatory burden than the one imposed on cigarettes.

The bill, which is expected to receive royal assent shortly, demands compliance with the new vaping regulations within 180 days.

Those regulations include a move to cut the number of flavours that can be used in an e-cigarette, banning any flavour designed to mimic “confectionery,” cannabis, soft drinks or energy drinks — flavours some parliamentarians believe are designed to hook young people on these devices.

The bill restricts most promotional activity around vaping products, forbidding the use of testimonials and references to health effects and additives.

Anti-smoking advocates maintain these regulations are necessary because any reference to an e-cigarette as safer than the traditional variety could be misleading. While vaping devices are often sold as smoking cessation aides, critics maintain they’re not entirely harm-free.

However, a recent review by tobacco experts at Public Health England found that e-cigarettes are considerably less harmful than traditional cigarettes.

“Anyone who has struggled to quit should try switching to an e-cigarette and get professional help,” the government agency recommended in its February 2018 report.