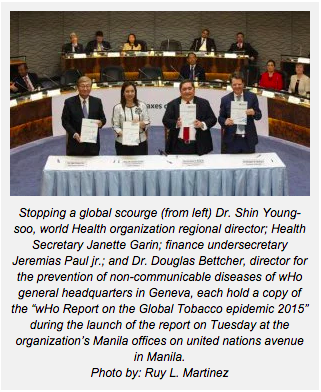 The esteemed World Health Organization has hailed the Philippines as a world model in implementing a tax measure that greatly reduced demand for tobacco at the launch of the WHO Report on the Global Tobacco Epidemic 2015 on Tuesday in Manila.

Dr. Douglas Bettcher, director for the Prevention of Non-communicable Diseases of WHO general headquarters in Geneva, Switzerland, cited the passage of the landmark Sin Tax Reform Law in 2012, which was implemented in January the following year that simplified the tax structure and increased excise tax rates by as much as 341 percent compared to those of the previous years.

The government collects P20 for every pack of cigarette, according to Undersecretary Jeremias Paul Jr. of the Department of Finance.

A 2009 national survey showed that 28.3 of adults aged 15 years or 17.3 Filipinos do smoke, with nearly half of men and one in 10 women are smokers. WHO 2013 data said21 percent of Filipinos smoke daily and that 74 percent of tobacco price go to tax.

Dr. Susan Mercado, director of the Division of Non-communicable Diseases and Health through the Life-Course of WHO Regional Office for the Western Pacific, said with such substantial increase in tobacco tax, a planned national survey is expected to show its impact on smoking prevalence.

After the tax increase in 2012, about 80 percent of incremental revenues are allocated for universal health care while 20 percent are allocated nationwide for medical assistance and health facility enhancement programs.

Bettcher said there has been a steady progress in global tobacco control a decade after the WHO Framework Convention on Tobacco Control (WHO FCTC) and seven years after the introduction of MPOWER to assist the countries in meeting some of their obligations.

MPOWER stands for Monitoring tobacco use and prevention policies, Protect people from tobacco smoke, Offer help to quit tobacco use, Warn about the dangers of tobacco, Enforce bans on tobacco advertising promotion and sponsorship, and Raise taxes on tobacco.

WHO rates the Philippines as moderate in MPOWER compliance, but it has complete compliance in advertising ban, and has 74 percent in taxation, which are enough to label the country as one of the most successful in implementing the program.

That is the reason why we selected Manila as the place where we are launching Raising taxes on tobacco of the WHO Report on the Global Tobacco Epidemic, 2015, Bettcher said.

WHO health experts like Shin Young-soo, regional director for the Western Pacific, challenged the Philippines to sell cigarettes by packs instead of by stick, which may further decrease smoking.

Meanwhile, Patricio Marquez of the World Bank and Michael Bloomberg, former mayor of New York City and sponsor of the 2015 launch, vowed to support the global campaign for smoke-free public places.

Marquez said raising taxes on tobacco products is one of the most effective-and cost effective-ways to reduce consumption of tobacco.

He cited Balanga City in Bataan province and the cities of Iloilo and Davao.
for totally banning smoking in public places.

By 2014, 11 countries had raised taxes so that they represent more than 75 percent of the retail price of a packet of cigarettes, joining the 22 countries that had similarly high taxes in place in 2008.

Bettcher cited the experience of France and China where higher taxes led to the decline of smoking prevalence and tobacco-related diseases, including lung cancer.

One person dies from tobacco-related disease every six seconds.

By 2030, eight million people will die of direct or second-hand smoking if no strong measures are taken to control the epidemic.

WHO cited some countries for making progress in implementing MPOWER like Australia, New Zealand, South Korea, Japan, Cambodia, Malaysia, Palau and Singapore, among others.

Health Secretary Janette Garin thanked WHO officials for supporting the countrys programs in its campaign to reduce smoking prevalence.

She urged towns and cities to implement the no-smoking laws in public places, saying tobacco use continues to be the single greatest preventable cause of death in the world. It is the cause of 22 percent of all cancers and 70 percent of lung cancers.

About 600,000 people die from second-hand smoking.

WHO said the the Western Pacific region targets to reduce the prevalence of tobacco use by 10 percent, including second-hand smoking.