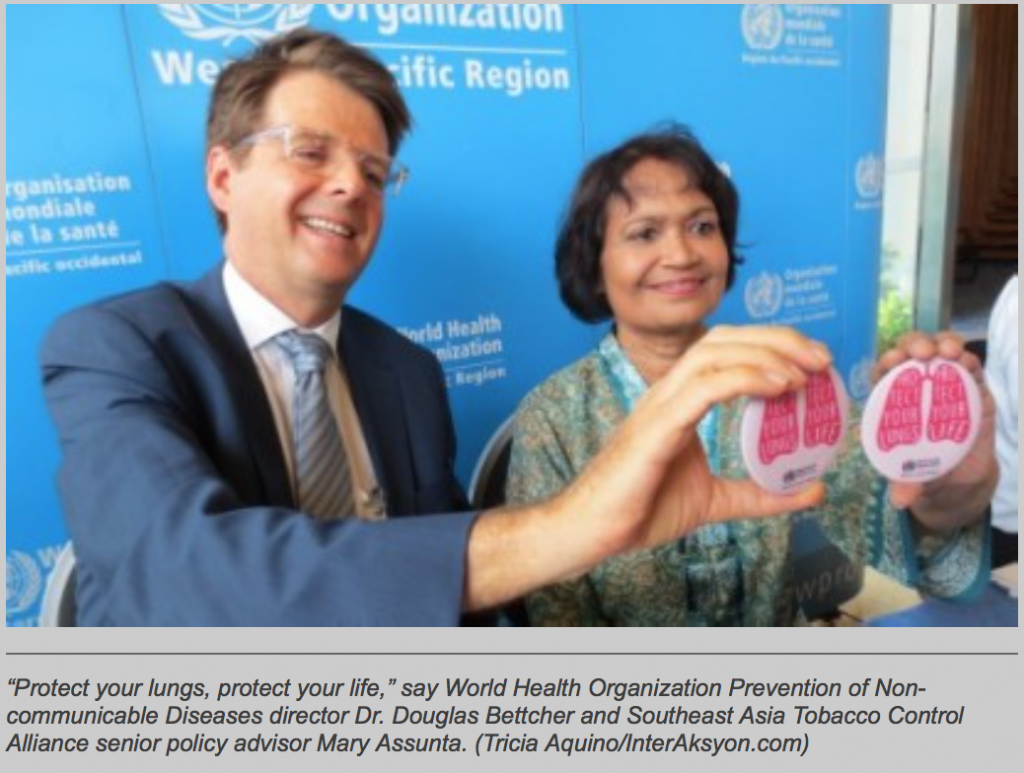 MANILA – The Philippines has slightly improved in its efforts to ensure the tobacco industry does not crimp government efforts to protect public health from what the World Health Organization (WHO) calls a “global killing machine which is almost unparalleled in human history.”

This is according to the Southeast Asia Tobacco Control Alliance (SEATCA), a regional network of tobacco control advocates, which released Tobacco Industry Interference Index: 2015 ASEAN Report on Implementation of WHO Framework Convention on Tobacco Control (FCTC) Article 5.3 Tuesday in a forum at the WHO Western Pacific Regional Office in Manila.

The Philippines is a party to the WHO FCTC, introduced in 2005. Article 5.3 states that countries must protect public health policies on tobacco control from commercial and other vested interests of the tobacco industry.

Brunei still delivered the best performance, while Thailand showed the biggest improvement from last year. The two were followed by Lao PDR, Cambodia, the Philippines, Malaysia, and Indonesia, whose performance worsened.

Assunta attributed the Philippines’ low ranking to the level of the tobacco industry’s participation in policy development. She said the tobacco industry even had a representative in the Inter-Agency Committee on Tobacco, which was formed through the implementing rules and regulations of Republic Act 9211 or the Tobacco Regulation Act.

The country was doing better when it came to government agencies refraining from participating in Corporate Social Responsibility activities held by the tobacco industry. According to the report, the Civil Service Commission-Department of Health Memorandum Circular No. 2010-01 enabled government departments to create Codes of Conduct which banned government officials from receiving or supporting such CSR activities, leading to a reduction in these activities.

Assunta lamented, however, that such CSR activities were not banned among most ASEAN countries, although the likes of Cambodia, Singapore, Thailand, and Vietnam had banned their publicity. She commended Thailand as well for banning such activities, making it the first in the ASEAN to do so.

Such CSR activities should be banned, she explained, because they helped foster public goodwill to an industry which killed half of its customers prematurely.

In fact, she noted, Philip Morris International (PMI) had increased its CSR spending in six countries from USD8.2 million in 2009 to USD12.5 million in 2013. Some had even gone to relief for Yolanda-stricken communities, Assunta said.

Another finding was that most countries accommodated requests from the tobacco industry for a longer implementation time or a longer review time for tobacco control laws. Only Brunei and Thailand refused to budge on these, Assunta said.

She wondered why PMI was manufacturing cigarette packs with graphic health warnings that made up 85 percent of the front and back of the packs in Batangas to export to Thailand, but would not immediately comply with the Philippines’ Graphic Health Warnings law. The government even had to grant tobacco manufacturers “a 12-month compliance deadline for printing the new graphic health warnings and an additional eight months for depleting old stocks after the initial 12 months,” according to the report.

“You have to ask them, ‘How valuable is life in the Philippines?’” Assunta said.

The Philippines had also made some headway in terms of reducing opportunities for unnecessary interaction between the government and the tobacco industry. These included attendance at social functions, ribbon-cutting ceremonies, and company dinners, Assunta said.

Countries should look to Australia for a simple practice in this regard, Assunta said. Every time the government has to interact with the tobacco industry, this is posted on a website, along with the schedule and purpose of the meeting.

Most of the countries did not improve in preventing conflict of interest, with only Brunei prohibiting political contributions from the tobacco industry, Assunta said.

In Indonesia and Malaysia, retired, senior government officials are even being hired to work for the tobacco industry or its associates, the report said.

Nor had there generally been improvement in terms of strengthening measures to prevent the governments’ interaction with the tobacco industry.

“Outside the Departments/Ministries of Health, most government departments have no knowledge of FCTC Article 5.3 Guidelines and treat the industry like any other industry or investor,” SEATCA said.

Assunta said the Philippines and Thailand were doing better than their neighbors in terms of restricting interaction, citing the Joint Memorandum Circular No. 2010-01 as enabling the Philippines to do so.

According to Atty. Krunimar Escudero III of the CSC, the following agencies were already implementing the order: CSC, DOH, Department of Education, Commission on Higher Education, Bureau of Internal Revenue, Department of Labor and Employment, Department of Foreign Affairs, and Metropolitan Manila Development Authority.

Push for guidelines not enough – WHO exec

This was why Assunta called for a stronger implementation of the FCTC 5.3 guidelines.

For his part, WHO Prevention of Non-communicable Diseases director Dr. Douglas Bettcher said that while countries were doing something to implement the guidelines, these were not enough.

He saw the tobacco industry as “the main vector of the tobacco epidemic,” likening its representatives to disease-carrying mosquitoes.

“If we don’t stand together, we all stand to lose,” he added.