From 2017, tobacco products in retail stores must be kept out of sight from the public at all times, according to new legal guidelines that will kick in once the Tobacco (Control of Advertisements and Sale) Act is amended.

SINGAPORE: From 2017, retailers of tobacco products will not be allowed to display them in their shops, the Ministry of Health (MOH) announced on Wednesday (Dec 9).

The ministry said it will move to ban stores from displaying such products after amendments to the Tobacco (Control of Advertisements and Sale) Act are tabled in Parliament.

Retailers may choose to use existing storage units, modify them or install new storage units that are permanent, self-closing and opaque. Retailers could choose to use vertical blinds, or even a curtain, among others. They are to comply with the new requirements, whereby tobacco products need to be out of sight from the public at all times. 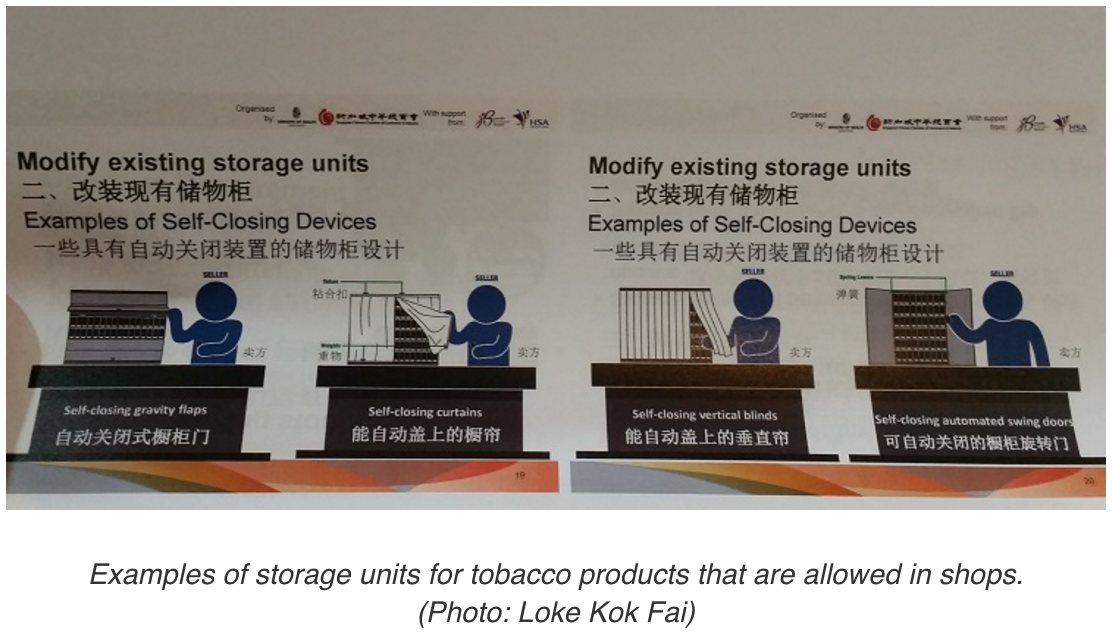 Exceptions will be made in the process of restocking the display unit or during a sales transaction, unless the staff carrying out these actions stops to do something else.

MOH said it is prepared to allow a text-only price list in a standard format, to facilitate transactions and ensure a level playing field while preventing misuse as a form of advertisement.

It added that it will allow storage units to be in the same colour as the decor or interior walls of the outlet, as long as the colour does not draw specific attention to storage units.

A brochure, published by the Health Promotion Board in the four national languages, will be distributed to retailers in the coming months, detailing the dos and don’ts of storing and selling tobacco products.

Senior Minister of State for Health Amy Khor said on Wednesday that authorities will work with retailers to help them comply with the new legal guidelines.

“Even as we are implementing this to protect non-smokers – particularly our young – from the promotional effect of point-of-sale displays and to create a better environment for smokers who are trying to quit, we also want to work with tobacco retailers to try and help them reduce the inconveniences caused to businesses,” Dr Khor said.

In response to media queries, MOH said findings in a 2014 local study conducted among 1,300 smoking and non-smoking respondents aged 18 to 69 supported this move.

“Hence, not displaying tobacco products can reduce the curiosity to smoke, and reduce spontaneous purchases of such products,” said MOH.

Daily smoking rates in Iceland decreased from 28.1 per cent in 1996 to 19.3 per cent in 2006 after a point-of-sale display ban on tobacco products was introduced in 2001, according to a report by Tobacconomics.

Retailers Channel NewsAsia spoke to said the ban would not have too great an impact on business, but they questioned its effectiveness in getting people to quit.

“Should a young person spot these cigarette cabinets, they would still be able to ask for and buy them. It doesn’t matter how you cover it,” said Mr Leong Kuo Tong, owner of Leong Brothers Departmental Store.

“Some customers will still insist on buying cigarettes. Even if they are hidden, they will ask us (for them),” said Mr Rajamohamed Jawahar Hussain, co-owner of Fairprice General Store.

MOH said it would continue to work with retailers to fine-tune the specific details of the measures.