A series of Philip Morris-sponsored articles about vaping published on the website of The Australian newspaper may breach national tobacco advertising promotion laws, public health advocates have said.

The chief executive of the Australian Council on Smoking and Health, Maurice Swanson, said he would ask the commonwealth health department whether the articles breached the Tobacco Advertising Prohibition Act 1992. 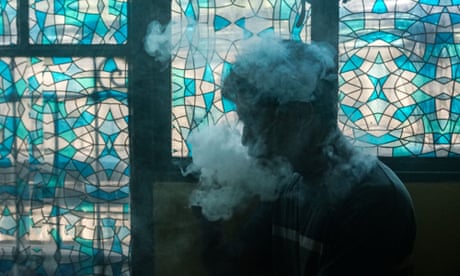 “They are part of a broader PR campaign by Philip Morris to undermine Australia’s cautionary approach to the regulation of heated tobacco products and e-cigarettes. Philip Morris is simply diversifying its range of nicotine products to ensure continuing addiction and maintain its profitability.”

State and territory laws make the sale of nicotine e-cigarettes and e-juice illegal throughout Australia, and its possession illegal everywhere but in South Australia.

“Fortunately, all state and federal governments and nearly all major health and medical organisations and medical colleges are implacably opposed to making these dangerous products available in Australia,” he said.

The global tobacco giant argues in the articles, which are labelled “sponsored content for Philip Morris International”, that Australia’s strict laws mean “men and women who don’t quit cigarettes are being denied the opportunity to switch to better alternatives”.

“The facts are the government continues to make it harder for Australia’s three million smokers and vapers to access alternatives,” the articles all say.

The articles are framed around initial scepticism towards scientific and technological breakthroughs such as the invention of cars, seatbelts, aeroplanes and computers, to argue that science has shown that vaping is a safer alternative, but governments are not listening to the science.

“While the best thing any smoker can do is quit tobacco and nicotine altogether, the reality is that many adult smokers in Australia will continue to smoke cigarettes – one of the most harmful ways to consume nicotine – unless the government rethinks its tobacco control policy,” one of the four articles, Computing Facts from Fiction, says.

“We should not let this become another tale driven by mindsets trapped in the present, captive to conventional wisdom and an unwillingness to recognise the potential of science and evidence to solve great problems.”

Philip Morris says on its website there will still be 1.1 billion people who choose to smoke in 2025 and they want to “convince all adult smokers who will otherwise continue smoking cigarettes to switch to scientifically substantiated smoke-free products as soon as possible”.

A spokesman for Philip Morris Australia said the articles were within the laws of Australia.

“Tobacco advertising laws in Australia permit the discussion of issues that relate to political matters – in this situation, the content relates to the ongoing political debate in Australia as to whether smoke-free products should be legally available and properly regulated for adult smokers who would otherwise continue to smoke.”

The Tobacco Advertising Prohibition Act makes it illegal to publish anything that promotes tobacco products. However, there is an exemption for political discourse as long as publications “don’t promote smoking, a particular tobacco product or range of tobacco products”.

A spokesman for News Corp Australia said the sponsored articles did not constitute tobacco advertising and had no impact on its journalists’ reporting on smoking and vaping.

“This is not tobacco advertising,” a spokesman said. “This is, instead, a campaign presented by Philip Morris to create awareness about current government regulations. This campaign has zero influence on how News Corp Australia reports on this or any other issue.

“The Philip Morris campaign does not, and was never intended to, promote smoking, cigarettes or vaping. All content is clearly branded as being presented to consumers by Philip Morris, paid for by Philip Morris and is focused solely on effective regulation around e-cigarettes.”

The Australian regularly reports on the dangers of smoking and vaping, including a report last month that said vaping was a “gateway” to conventional smoking and those using e-cigarettes were three times as likely to take up tobacco.