(Reuters) – Cigarette maker Philip Morris International Inc has suspended a global social media marketing campaign in response to Reuters inquiries into the company’s use of young online personalities to sell its new “heated tobacco” device, including a 21-year-old woman in Russia.

The company’s internal “marketing standards” prohibit it from promoting tobacco products with youth-oriented celebrities or “models who are or appear to be under the age of 25.”

The company told Reuters of the decision late Friday, saying it had launched an internal investigation into marketing posts and photographs that Reuters sent to the company for comment earlier this week.

They included a paid post plugging the tobacco product by social media “influencer” Alina Tapilina in Moscow – who listed her age as 21 on Instagram – alongside often seductive photos of herself drinking wine, swimming and posing with little clothing in luxurious settings. 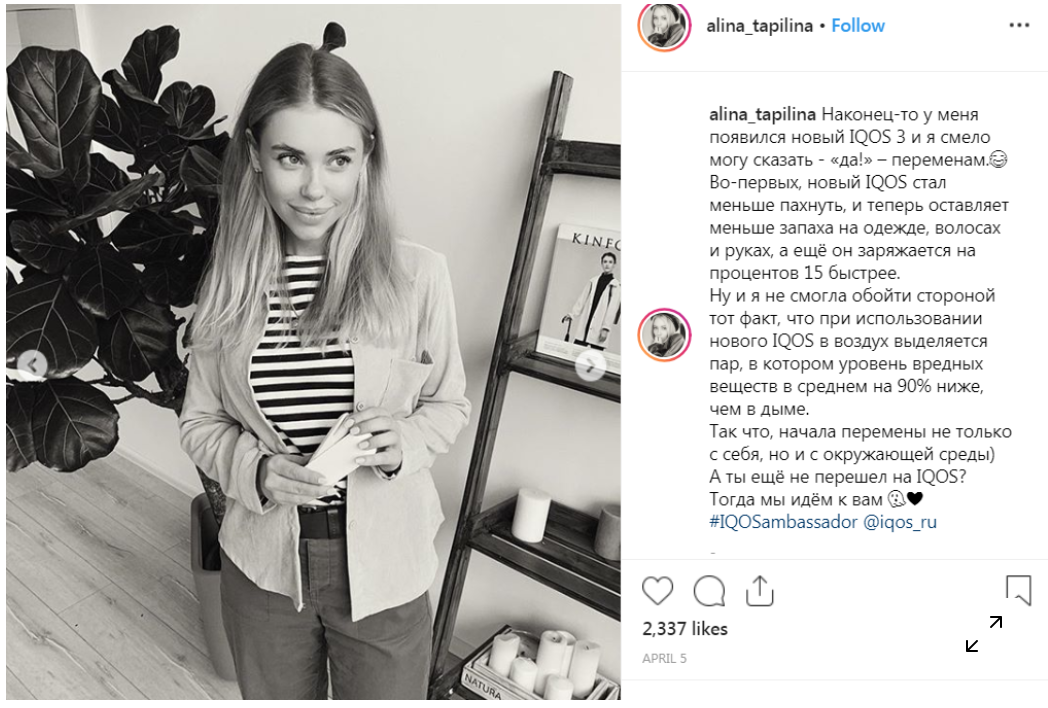 “We have taken the decision to suspend all of our product-related digital influencer actions globally,” the company told Reuters. “Whilst the influencer in question is a legal age adult smoker, she is under 25 and our guidance called for influencers to be 25+ years of age. This was a clear breach of that guidance.”

“No laws were broken,” the company told Reuters. “However, we set high standards for ourselves and these facts do not excuse our failure to meet those standards in this instance.”

The company added: “We were deeply disappointed to discover this breach and are grateful that it was brought to our attention.”

The U.S. Food and Drug Administration (FDA) last month decided it would allow sales of the IQOS device in the United States after a two-year review process in which Philip Morris repeatedly assured the regulator that it would warn young people away from the product.

The FDA declined to comment Friday evening on Philip Morris’s decision to suspend the marketing campaign. The agency earlier said it would “keep a close watch on … how the company is marketing its products.”

While most of the social media influencers hired by Philip Morris overseas did not list their ages on Instagram, a Reuters review of the firm’s social media marketing of IQOS in Japan, Italy, Switzerland, Russia and Romania shows that Tapilina’s online persona was typical of what the company called its social media “ambassadors” for the device – rail-thin young women who revel in the high life. 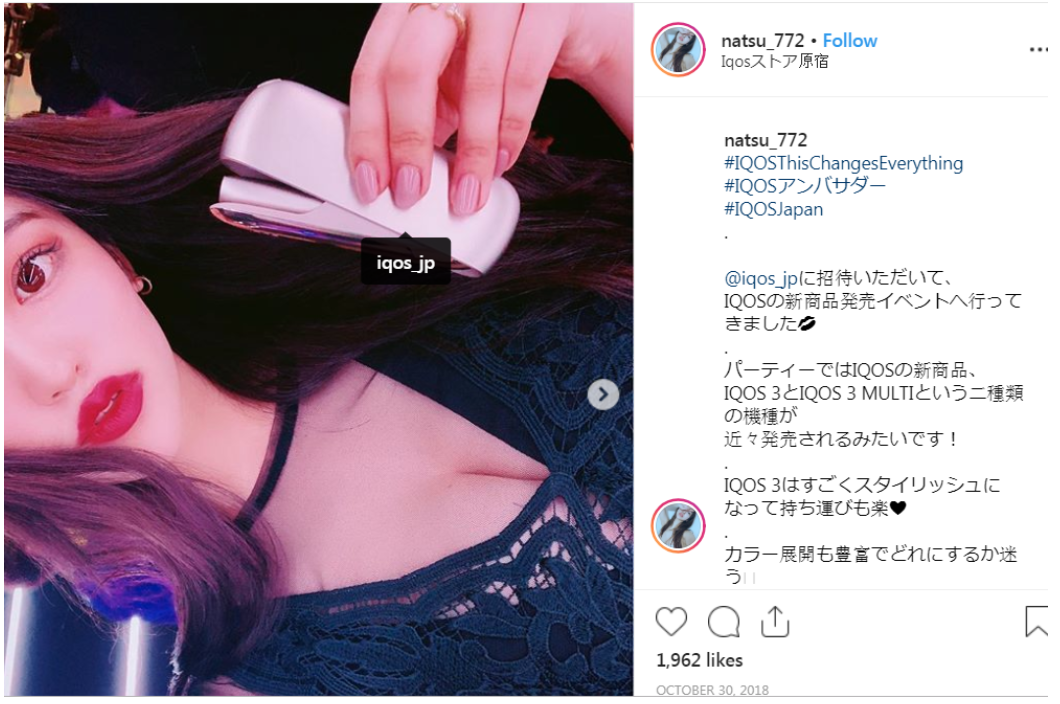 Natsumi, who goes by the handle @natsu_772 and whose age Reuters was not able to determine, holds a “heated tobacco” IQOS device

The company did not directly respond to additional questions Friday night regarding the intended audience for its digital influencer campaigns.

Many of the messages contained the hashtag “#IQOSambassador,” tying them into a network of social media influencers that the international tobacco giant has relied on to brand the IQOS as a safer alternative to cigarettes and a sexy fashion accessory.

“I finally have the new IQOS 3, and I can confidently say yes to change … the level of harmful substances is on average about 90 percent lower than in smoke,” Tapilina wrote in an April post. “You haven’t yet switched to IQOS?”

One Romanian IQOS marketer is 25 years old, according to a separate actress biography, but did not list her age on Instagram. Tapilina and nine other IQOS marketers did not respond to requests for comment.

Philip Morris, in its statement to Reuters, said its suspension of the social marketing campaign is “concrete proof” of its “conviction to achieve a smoke-free world through socially responsible practices.”

Matthew Myers, president of The Campaign for Tobacco-Free Kids, had a different take upon hearing of the suspension Friday night. The advocacy group collected some of the IQOS marketing images reviewed by Reuters.

Philip Morris, he said, “is changing their behavior only when caught red-handed.”

The company, Myers said, has historically been “the single most successful across the globe in making cigarettes fashionable to young people.”

Over the past year, Philip Morris has increasingly publicized its “mission” to prevent young people from using tobacco products. Last month, it issued a release calling on “all tobacco and e-cigarette companies to do their part to guard against youth nicotine use.”

When Philip Morris submitted marketing plans with an FDA application for IQOS in 2017, its sample advertisements featured models appearing at least a decade older and wearing modest, professional clothes.

That application, which is still pending before the FDA, seeks approval to market the IQOS as less harmful than smoking and outlines company plans to ensure it doesn’t market the device to “non-intended audiences.” The device heats up but does not burn packages of ground-up tobacco, which resemble small cigarettes, to create a nicotine-filled aerosol.

In Japan, the intended audience for IQOS marketing includes the Instagram followers of Ayame Tachibana, a 27-year-old DJ and model. In one post, she shows off a Valentine’s Day message for the IQOS device, lovingly scrawled with multicolored pens. 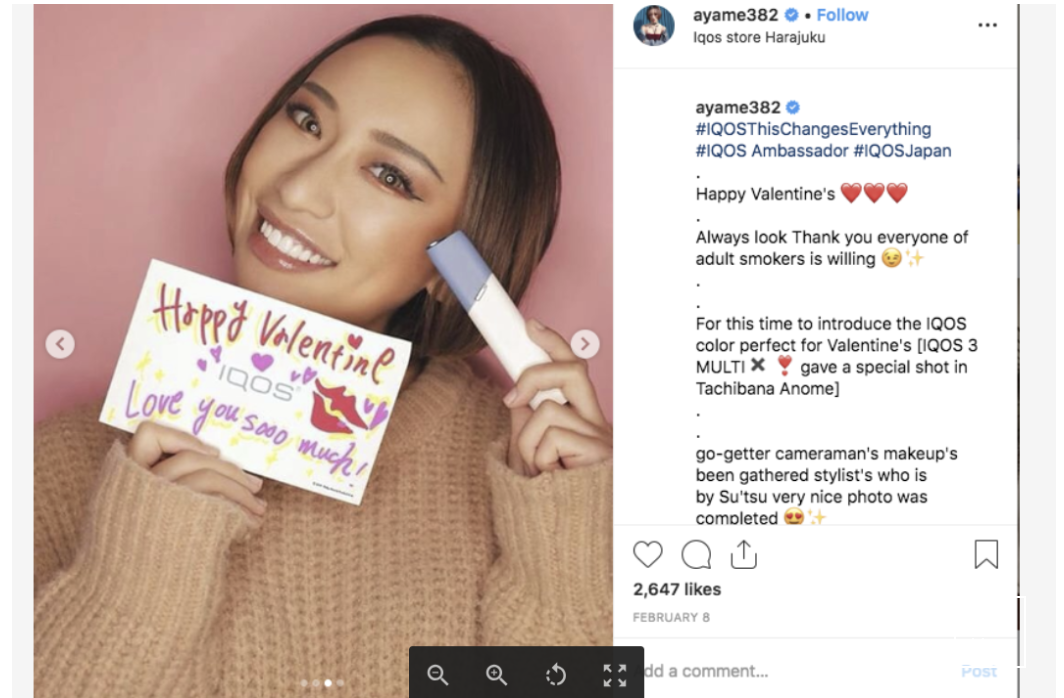 Ayame Tachibana, a 27-year-old Japanese model, shows off a Valentine’s Day card for the IQOS

Alina Eremia, a Romanian actress and singer, holds a gold-colored IQOS in front of a Christmas tree.

“My list of resolutions contains 95% fewer moments without a smile,” says Eremia, who is 25 according to her actress biography on multiple movie and celebrity information websites.

Philip Morris says the IQOS – an acronym for “I quit ordinary smoking” – contains up to 95 percent fewer toxic compounds than cigarettes.

Vlad Parvulescu, a manager for Eremia, confirmed she had been hired to promote IQOS and said she had been contacted by a Romanian public relations agency. He did not respond to additional questions about the financial arrangement.

Marketing deals between companies and social media influencers vary widely, according to industry experts. But typically a company will work through third-party public relations or advertising firms that have relationships with online personalities. Compensation typically ranges from $20 to $25,000 or more for each post.

Corporations have become increasingly sophisticated in how they approach their social media campaigns in the past two years, said Joe Gagliese, co-founder of Viral Nation, a marketing and talent agency that works with influencers.

He once had to explain the basic concept of an “influencer” in pitch meetings. Now, companies approach him with “tailor-made decision briefs saying, ‘this is exactly what we want.’”

Reuters reviewed dozens of social media posts featuring the IQOS device. Many included hashtags such as #IQOSAmbassador, #paidad, and #notriskfree, indicating that they are IQOS marketing posts. 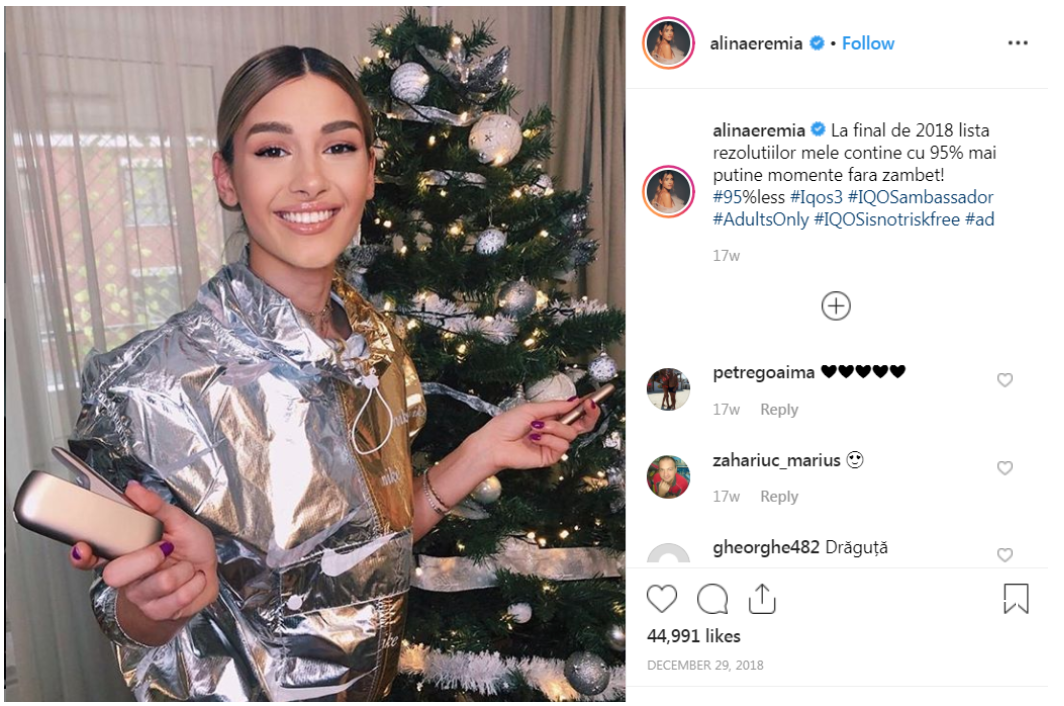 Alina Eremia, a Romanian actress and singer whose biography gives her age as 25, holds a gold-colored IQOS device in front of a Christmas tree

Many of the Instagram influencers featuring the products had tens of thousands of followers, and a few had more than a million.

Devices such as IQOS and Juul hold potential as a way for cigarette smokers to transition to less harmful nicotine products, but some public health advocates worry the sleek new devices are addicting young people who would have never smoked cigarettes. Among traditional cigarette smokers, 90 percent start smoking before the age of 18, according to federal data.

Philip Morris said there have been “no reports” of “worrisome levels” of unintended use of IQOS.

As part of the FDA review process, Philip Morris pledged to market only to adult cigarette smokers once it begins selling IQOS this summer through a partnership with Altria Group Inc, which sells Marlboro cigarettes in the U.S. IQOS delivers about the same level of nicotine as a traditional cigarette.

Social media marketing has become a flashpoint in the debate over regulation of tobacco products, particularly the newest generation of products such as the wildly popular Juul e-cigarettes.

Some of Juul’s early social media and YouTube marketing included images of attractive young people, particularly at a 2015 product launch party. Twitter images from that time on Juul’s official account featured sensual images of a young woman breathing out Juul vapor in a group, next to the slogan, “Share a #Juulmoment.”

Those early campaigns sparked an explosion of video and photo posts from young people showing themselves using the product at school or with friends, often under the hashtags #doit4juul or #juullife. Juul Labs Inc has since said it stopped using social media influencers and requires anyone in its ads to be a former cigarette smoker older than 35.

Juul Labs Inc said in a statement it recognizes that “some of our earliest marketing initiatives did not fully reflect the goal of our company,” which it describes as helping cigarette smokers transition to its products.

“As a young company, we learned from our experiences and instituted changes to help ensure that we are only reaching current adult smokers,” the company said.

U.S. laws governing tobacco advertising – which is banned on radio and television – were drawn up long before social media and digital advertising became a dominant force in consumer marketing.

Although no current state or federal law restricts tobacco advertising on the Internet – including for e-cigarettes and devices such as IQOS – the FDA can use its authority over new devices to assert sweeping control over a company’s marketing.

As a condition for allowing the device to be sold, the FDA is requiring Philip Morris to provide detailed analyses of the age ranges of consumers it reaches through digital advertising. Philip Morris is also required to submit any new advertising campaigns, including digital and social media efforts, to the FDA at least 30 days before it plans to launch them.

Any paid influencers promoting the product also must disclose “any relationships between you and entities that create labeling for, advertise, market, and/or promote the products, on your behalf, or at your direction.”

Those rules aim to restrict youth access to tobacco marketing, the FDA said in a statement, “especially in shared digital properties such as social media sites.”