The Office of the Attorney-General filed a multi-billion-baht tax evasion lawsuit against Philip Morris Thailand (PMTL) in the Criminal Court on Monday, a charge the tobacco giant’s management insistedwas “without merit and unjust”.

It comes more than two years after the then attorney-general, Chulasingh Vasantasingh, decided in October 2013 to indict the company, its executives and staff. The defendants are PMTL, its branch manager Troy Modlin as its authorised representative, and seven Thai employees. The court accepted the lawsuit and called the plaintiff and defendants to a meeting on April 25, Lt JG Somnuek said. 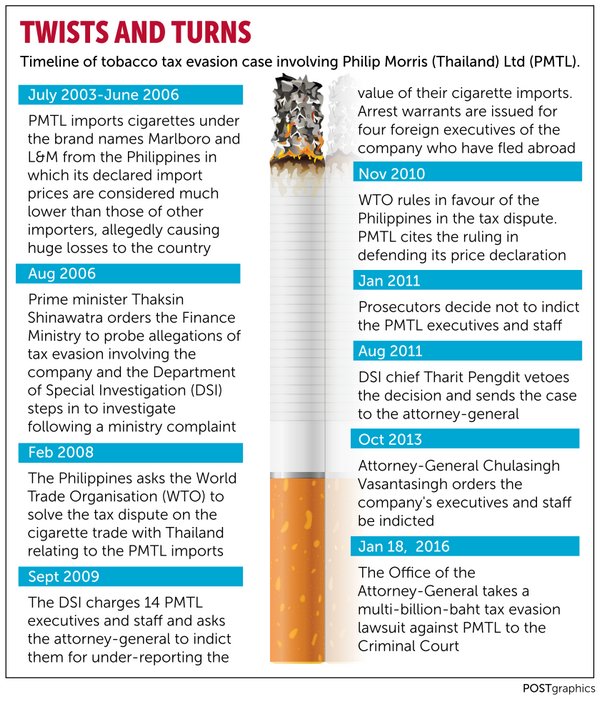 PMTL also declared the Cost, Insurance and Freight (CIF) rate on Marlboro cigarettes from the Philippines at 7.76 baht a packet, lower than the 27.46 bahtreported by other importers. The value of the imported products and avoided tax was estimated at 20 billion baht. The offence risksa fine worth four times the amount, or about 80 billion baht, OAG deputy spokesman Prayuth Bejraguna said.

The case also carries a punishment of a maximum jail term of 10 years. The defendants are among 14 parties who the Department of Special Investigation earlier charged overthe case. Four other foreigners — the PMTL executives — reportedly fled abroad. The statute of limitations of the suspects who fled will expire between July 2018 and June 2021.

The court approved the Thai defendants’ requests for bail at one million baht in surety each, said Chartpong Chirabandhu, deputy chief of the OAG’s Department of Special Litigation.”The target of the case is for a fine rather than imprisonment,” Mr Chartpong said.

Meanwhile, PMTL described the OAG’s charges against the firm as “meritless and unjust”. “PMTL has done nothing wrong,” Mr Modlin said. “Not only are these charges wholly without merit and in violationof Thailand’s obligations to comply with the WTO Customs Valuation Agreement, they also call into question Thailand’s commitment to fairness, transparency and the rule of law.”

He said that prosecuting this case will also undermine Thailand’s desire to revitalise its reputation in the international community as a market-based open economy that is investor friendly. “PMTL has cooperated fully with all involved agencies since the DSI launched its investigation in 2006. The company intends to vigorously defend itself and demonstrate it is in full compliance with Thai law and international standards of customs valuation,” he said.