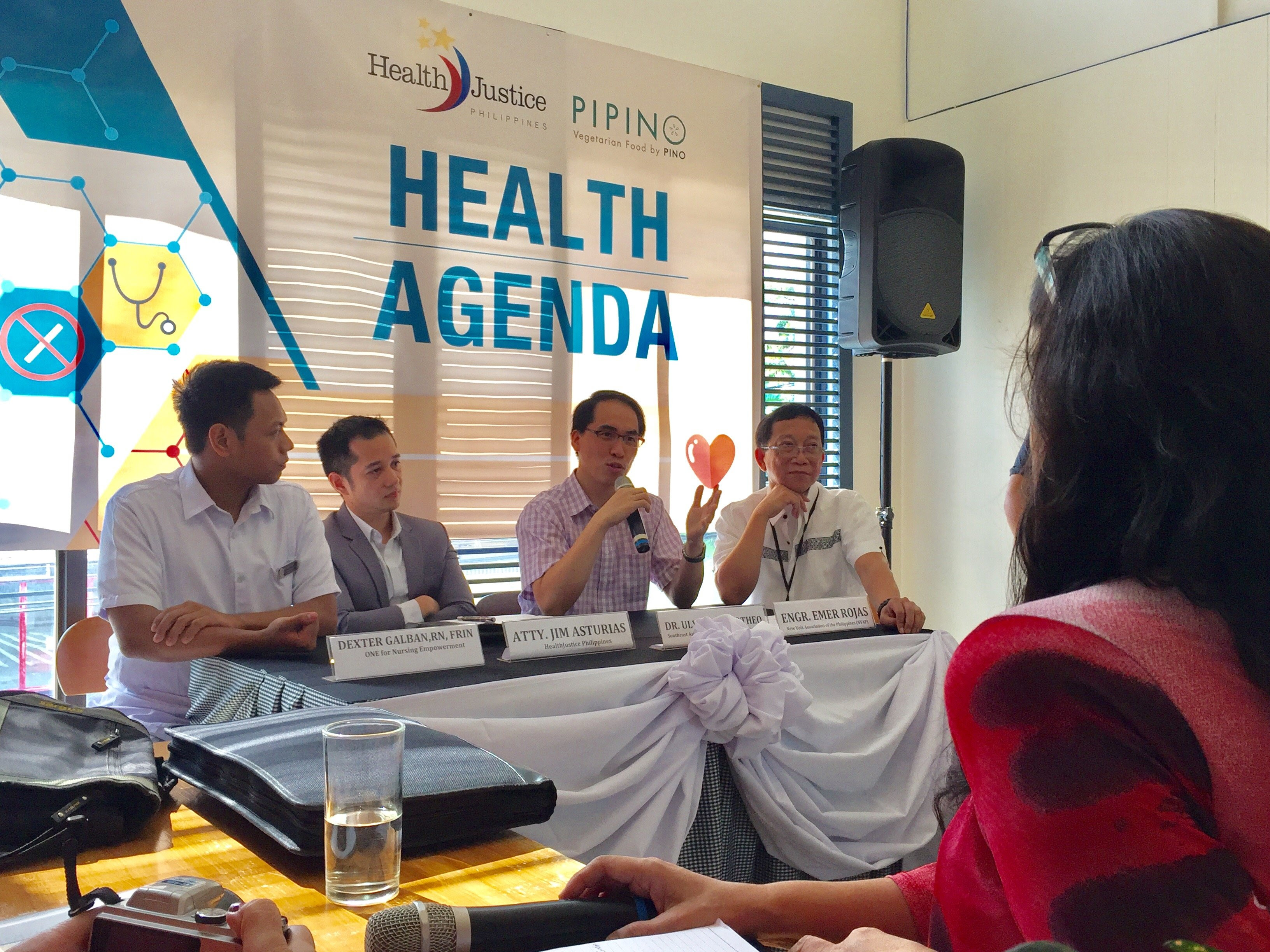 SEATCA’s FCTC Program Director, Dr. Ulysses Dorotheo said that the Philippines, being a Party to the FCTC, is obligated to implement 100% smoke-free laws to effectively protect all persons from exposure to secondhand smoke. The sooner the President signs the EO, the better it will be for all Filipinos.

At least 240 Filipinos die every day due to smoking-related diseases, so every minute counts. Last May, Duterte announced that he would implement a “no smoking” policy nationwide.
Other organizations speaking at the press conference were HealthJustice Philippines represented by Legal Consultant, Atty. Jim Asturias; New Vois Association of the Philippines (NVAP) represented by its president, Engr. Emer Rojas; and ONE for Nursing Empowerment Founder, Mr. Dexter Galban.

HealthJustice Philippines, the Southeast Asia Tobacco Control Alliance (SEATCA), and New Vois Association of the Philippines (NVAP) and ONE for Nursing Empowerment read out the CSO statement urging the President to “Sign the smoke-free EO now.”

“We continue to await with high hopes and unrelenting enthusiasm your signing of the Executive Order enforcing the nationwide smoking ban. We urge you to sign the Smoke-free Executive Order immediately,” the statement read.

Atty. Bianca Bacani of HealthJustice Philippines pointed out that “The WHO Framework Convention on Tobacco Control (FCTC), RA 9211 or Tobacco Regulation Act of 2003, Land Transportation and Regulatory Board (LTFRB) Memorandum Circular 2009-036, Civil Service Commission (CSC) Memorandum Circular 2009-17, and RA 8749 or Clean Air Actalready ban smoking in public places. The President’s EO can ensure the strict enforcement of these bans.”

“There is no safe level of exposure to secondhand smoke (SHS); so all persons must be protected. SHS increases the risk of developing lung and other cancers, heart disease, stroke, and chronic lung diseases. It can also trigger acute asthma and heart attacks. The Philippines, being a Party to the FCTC, is obligated to implement 100% smoke-free laws to effectively protect all persons from exposure to SHS.” Dr. Ulysses Dorotheo, FCTC Program Director of SEATCA, said.

“Exposure to tobacco smoke is one of the leading causes of cancer and other serious illnesses in our country. 240 Filipinos die every day or 10 people every hour due to smoking-related diseases. Every minute counts, so the sooner the President signs this law, the better,” said Engr. Emer Rojas of NVAP.

Last May, Duterte announced that he would implement a “no smoking” policy nationwide. During the signing of the implementing rules and regulations of the Centenarian Acts of 2016, he spoke again of his plan, saying “I will not allow smoking because you pass cancer to the people who do not want it.”

HealthJustice is a public health think tank that aims to bridge the gap between health and law to empower Filipinos to make healthy choices. The founding members of HealthJustice include doctors, lawyers, and economists who have been recognized for their services in both the private and public sector. Armed with the wealth of experience in promoting policy change in the fields of health, environment, and human rights, HealthJustice serves as a vehicle for Filipinos to be free from health risks through appropriate health policies.