Donations of ventilators and supplies are part of a ‘classic tactic’ by the industry to get close to governments and try to undermine health policies, say public health advocates. Should tobacco firms’ CSR activities be allowed?

On 26 March this year, as the Philippines recorded 707 Covid-19 cases two weeks into a nationwide lockdown to curb the coronavirus’ spread, the country’s biggest tobacco firm and its corporate social responsibility (CSR) arm donated hundreds of bags of rice and canned sardines to the city government of Cagayan de Oro.

PMFTC is the Philippine affiliate of tobacco giant Philip Morris International, which has about 70 per cent market share in the country. A joint venture with the Fortune Tobacco Corp, PMFTC’s brands in the Philippine market include Marlboro and Fortune. Fortune Tobacco is owned by Filipino businessman Lucio Tan’s LT Group.

The CSR initiatives were a response to the government’s call for private sector support in confronting the unprecedented pandemic, according to the JVOFI’s website.

Reality isn’t so simple. When it comes to CSR activities by tobacco companies in most countries, the question really is: Should it be allowed?

For tobacco control and public health advocates, the answer is a clear no. Under the World Health Organisation’s (WHO) Framework Convention on Tobacco Control (FCTC), signatories—including the Philippines—must implement a comprehensive ban on tobacco advertising, promotion and sponsorship.

CSR constitutes a form of sponsorship, say anti-tobacco advocates, and major tobacco firms have long used such activities to cosy up to government officials and policy makers across the world, as well as sidestep advertising bans.

Advocates say the industry, which is responsible for more than 8 million deaths worldwide annually, has never taken responsibility for the diseases and deaths caused, as well as other harmful impacts on society and the environment.

(The tobacco industry) is exploiting the 2020 Covid-19 pandemic to provide resources to countries badly in need of them, framing itself as being “part of the solution”—a classic tactic of the tobacco industry to get close to governments and enable it to interfere with, derail and undermine health policies aimed at reducing tobacco use.

As countries around the world struggle to contain Covid-19, tobacco firms have stepped up their CSR activities to frame themselves as being part of the solution, public health expert Mary Assunta stated in the Global Tobacco Industry Interference Index 2020 released last month. This, she argued, is “a classic tactic of the tobacco industry to get close to governments and enable it to interfere with, derail, and undermine health policies aimed at reducing tobacco use”.

“While publicising its charitable acts to resuscitate its image as being part of the solution, the industry was simultaneously lobbying governments not to impose restrictions on its business and even to declare tobacco as an ‘essential’ item during the pandemic,” wrote Assunta, the report’s author. 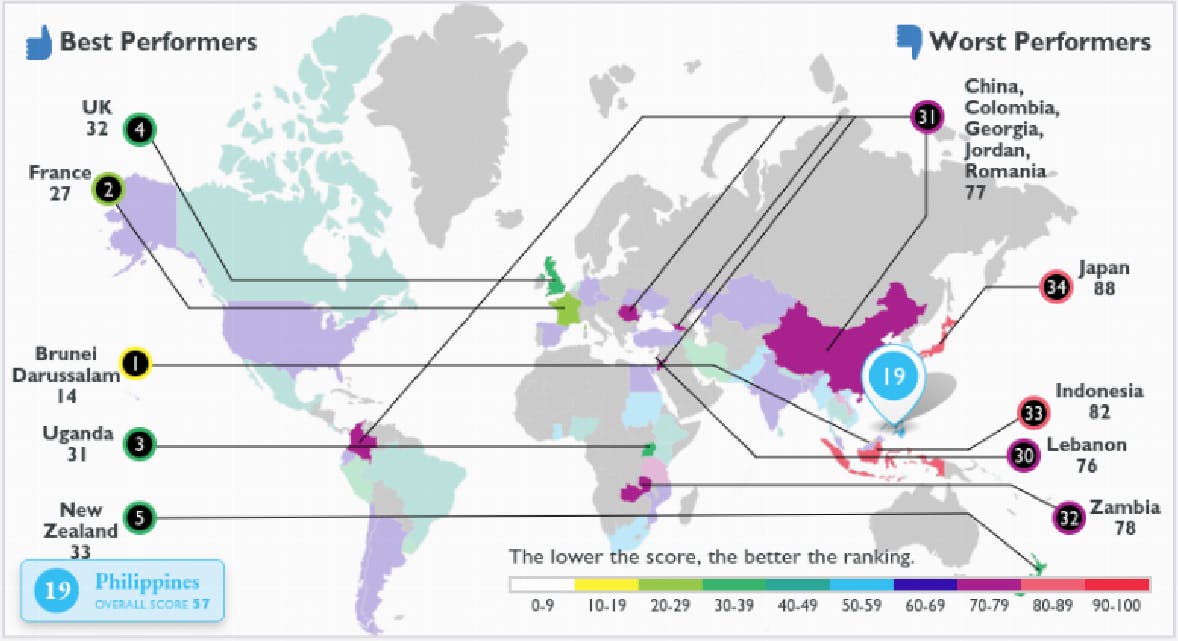 PMFTC was not alone in its CSR efforts, which are fully tax-deductible.

The LT Group dished out face masks, ethyl alcohol, gloves, thermal scanners and other items to hospitals and local government units. It donated a fully equipped bio-molecular laboratory to diagnose Covid-19 infection, worth PHP15 million (US$311,587), to the Philippine National Red Cross in Tanauan, Batangas, where it has cigarette factories.  National Red Cross societies are strongly urged by the International Federation of Red Cross and Red Crescent Societies’ governing board to refrain from taking tobacco industry donations.

By mid-April, as Covid-19 cases in the Philippines surged beyond 8,200, LT Group said it had chalked up PHP200 million in assistance.

JTI (Japan Tobacco International), the other major tobacco firm in the Philippines, donated 20,000 face masks to hospitals in Batangas, where its manufacturing hub is located, in April.

During the pandemic, both JTI and PMFTC lobbied the Philippine Department of Finance for permission to keep their factories open and continue manufacturing cigarettes, despite the fact that cigarettes were considered non-essential. Japan Tobacco argued that the low supply of cigarettes emboldened smugglers.

Violation of government memo? A mayor and  health officials respond

Unlike some other countries such as Myanmar, the Maldives and Laos, the Philippines does not currently have laws banning CSR activities by tobacco companies.

But the Philippine Department of Health and Civil Service Commission issued a joint memo in 2010 to shield government officials from tobacco industry interference, and acceptance of the tobacco industry’s donations is a clear violation of the memo, said tobacco control advocates HealthJustice and the Southeast Asia Tobacco Control Alliance (SEATCA). The latter is a Thailand-based group that provides technical assistance in tobacco control to governments in the region, among other activities.

More recently, health secretary Francisco Duque issued tobacco control guidelines in light of Covid-19. The guidelines, issued in May, reiterate existing rules that prohibit public officials and employees from unnecessary interaction with the tobacco industry, and accepting anything of monetary value from persons or entities linked to the industry.

Public officials and employees must also not accept contributions from CSR activities sponsored and promoted by the tobacco industry.

The Philippines’ Department of Health, Civil Service Commission, PMFTC and JVOFI have not responded to Eco-Business’ requests for comment.

But in Northern Mindanao, Department of Health regional director Adriano Suba-an insisted that the bureaucracy has implemented the government’s tobacco control policy.

“We see it as a matter of public health interest, during this pandemic, to advocate against smoking and we also guard ourselves from tobacco industry interference as we follow guidelines in the procurement of supplies and acceptance of donations. We do not (have business transactions) with establishments who have links with tobacco industry,” stressed Dr Suba-an, whose office accepted ethyl alcohol from LT Group.

So far, there has not been any complaint against any government official or employee for violation of tobacco control guidelines, he added.

Do I as a government official allow the tobacco company to interfere in the implementation of government policy? I don’t… As long as these donations are transparent and open, I do not see any problem.

“The key word there is ‘interference’, and another is ‘personal’,” he said. “Do I as a government official allow the tobacco company to interfere in the implementation of government policy? I don’t. Do I profit personally from my official dealings with them, as in asking them to employ a relative in their company, for example? I do not.”

The tobacco industry’s donations were needed at temporary treatment and monitoring facilities, he said. “As long as these donations are transparent and open, I do not see any problem.”

Moreno, who is law-trained, added that he continues advocating for people to stop smoking, as he himself did 10 years ago.

“I understand the good intention of JVOFI in donating the equipment. I understand when I googled its website that it is a donee organisation and accepts donations from many organisations and these it shared with 10 government hospitals, including ours, those involved in Covid response,” Chan said.

Misamis Oriental Governor Yevgeny Vicente Emano, who mediated the donation of the ventilator to the hospital, was not available for comment.

HealthJustice project manager Ralph Emerson Degolaccion is unconvinced by the argument. “Legally, (the tobacco firms) get away with it but if we dig deeper, you can see that their logos and company names are clearly displayed, which is a prohibition under the law. They have found a way to circumvent the law,” Degolaccion said.

Legally, (the tobacco firms) get away with it but if we dig deeper, you can see that their logos and company names are clearly displayed, which is a prohibition under the law. They have found a way to circumvent the law.

The Philippines emerged 19th out of 57 countries in the latest Global Tobacco Industry Interference Index, dropping seven places from the previous edition in 2019, which ranked 33 countries. The country is deteriorating in tackling tobacco interference because the tobacco industry has a seat in the tobacco control committee that implements the law, the 2020 Index stated.

There are also unnecessary interactions between the industry and top-level officials, including an overseas trip for legislators which exposed them to Philip Morris’ Unsmoke campaign promoting non-cigarette alternatives, the report noted.

But there have been gains in countering tobacco industry interference, such as the passing of a law increasing taxes on tobacco products, the country summary noted.

Meanwhile, Covid-19 does not appear to have dented the tobacco business in the Philippines.

The LT Group said in a disclosure last month to the stock exchange that its net income grew 9 per cent in the first nine months of 2020 to PHP16.1 billion, up from PHP14.72 billion in the same period last year. This was driven by strong results from its tobacco and liquor businesses. PMFTC earnings accounted for PHP12.12 billion, or 75 per cent, of the income. This was 27 per cent higher than the same period last year.

Stopping Tobacco Organizations and Products, or STOP, is a project supported by Bloomberg Philanthropies.