ENGINEER  Emer Rojas is often described as a walking graphic health warning against smoking. Having lost his natural voice, he speaks only through an electrolarynx. 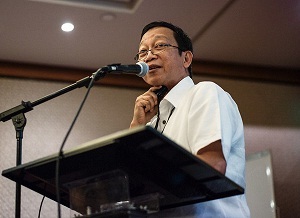 In speaking tours he uses his robotic voice to illustrate the very real dangers of tobacco consumption. Unfortunately, many still choose to ignore his message.

Information from the Department of Health indicates that about 10 people die every hour due to smoking-related diseases. Globally, the World Health Organization places tobacco-related deaths at one every eight seconds.

Rojas was 44 years old when diagnosed with throat cancer. After smoking an average of 30 sticks of cigarette a day since he was 17 years old, the vice caught up with him. He had to quit a career with a giant telecommunications firm as he underwent treatment that eventually cost him his vocal cords.

“I was lucky,” he described the trial that hit him at his prime. He now speaks with the help of an electrolarynx, a small device he presses against his neck that allows him to verbalize his thoughts.

“I should’ve died, but I survived,” the 56-year-old anti-smoking advocate said. “I have to return the favor to God. (Advocating against smoking) is my way to protect others from being like me.”

Some 28.3 percent or about 17.3 million Filipinos aged 15 years and older smoke, according to the 2009 Philippine Global Adult Tobacco Survey.

The prevalence of smoking is even higher now due to the increase in population, making the country the 15th largest consumer of cigarettes in the world.

Rojas’ four children are not part of the statistics though. His life is sufficient lesson for them to not pick up the habit.

But Rojas’s brood is more the exception than the rule.

This is partly cialis online 20mg because despite the Sin Tax Law, which now imposes as much as P25 in excise taxes on tobacco products, the price of cigarettes here is still low at around P50 compared to other countries. The average price of a pack in Singapore is equivalent to P400 while the sale of cigarettes is banned in Brunei.

Another factor that makes cigarettes affordable even to the lower economic class is the retail system. A stick of cigarette costs as little as P3 in the provinces and thus a more cost-effective way to curb hunger pangs.

The lax implementation of smoking regulations and the absence of graphic warnings in cigarette packages on the dangers of smoking are not helping to stop the dangerous habit. Neither do they discourage non-smokers from picking up the vice.

Philippine health advocates have pushed for the picture warnings but their efforts have been stymied by the powerful tobacco lobby. This demonstrates the extent of the tobacco industry’s influence over public policy, say anti-smoking advocates.

The 2014 Tobacco Industry Interference Index released by the Southeast Asia Tobacco Control Alliance (SEATCA) shows that the level of tobacco industry participation in policy development is the highest among seven other countries surveyed.

The Philippines scored even higher than Indonesia, where nearly 70 per cent of all males over age15 smoke, according to a 2011 survey in the country.

“This index shines a light on where the interferences are,” Assunta said. “We are alerting countries that they need to step up their efforts, disclose all interactions with the industry, exercise transparency, stop receiving industry contributions, and ban their CSR activities.”

The Association of Southeast Asian Nations is home to about 127 million smokers or 10 percent of the global smoking population.

Going against a multi-billion dollar industry is difficult enough. Having prominent members of society – including a president who unabashedly enjoys his nicotine fix and indirectly advertises smoking – makes the effort doubly hard.