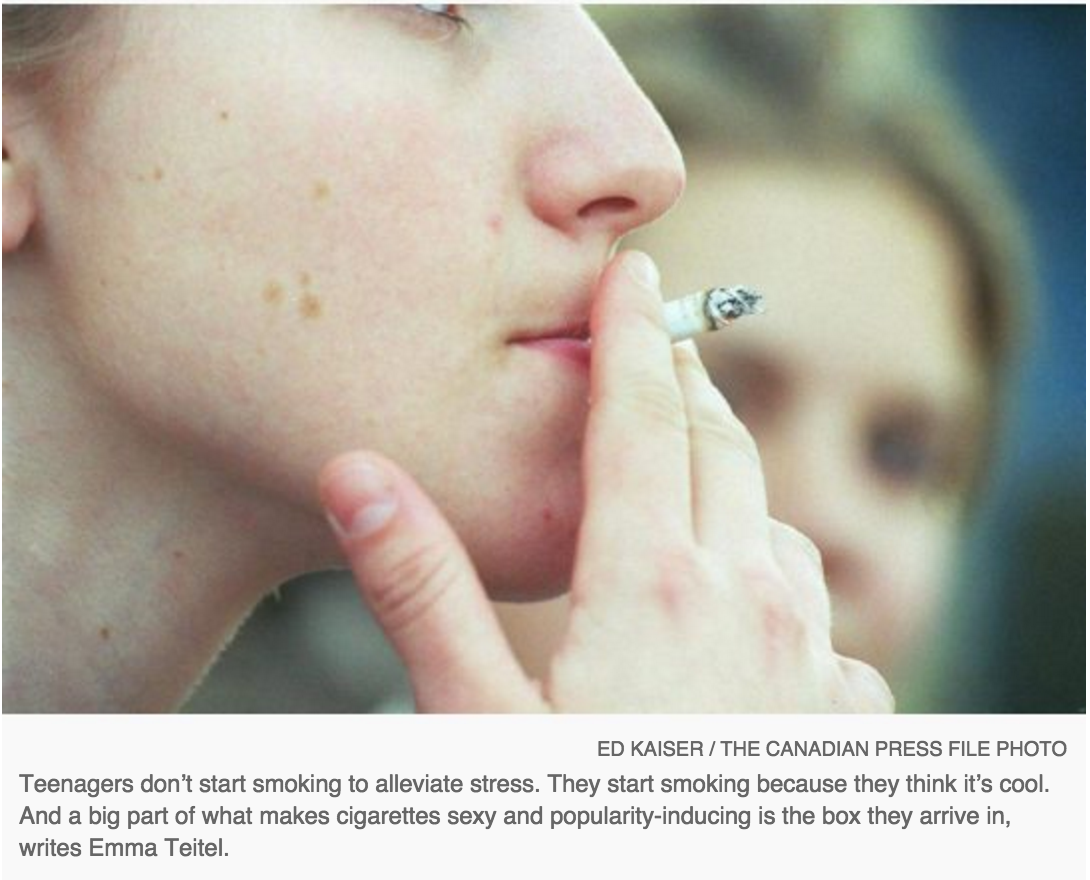 If the Liberals’ policy is fulfilled, every cigarette pack in Canada will have the same uniform look and colour; its only distinguishing feature will be a brand name, printed in small letters at the bottom of the product.

This anti-smoking initiative will almost certainly be annoying for convenience store owners who, having memorized every cigarette logo in their stocks, might one day be forced to squint at hundreds of labels in order to select the right box. But by all other accounts, the government’s plan is ingenious. Here’s why. Plain packaging won’t likely convince Canadians to quit smoking, but it might dissuade them from taking up the habit to begin with.

This is because while the new mandate won’t warn people about the dangers of smoking (which they already know by now) it does something more powerful. It erodes brand loyalty to tobacco companies, and chips away at the only thing that makes cigarettes appealing to first time smokers in the first place: their cool factor.

Teenagers don’t start smoking to alleviate stress. They start smoking because they think it’s cool. And a big part of what makes cigarettes sexy and popularity-inducing is the box they arrive in. This is a reality well known to tobacco companies: the pack of cigarettes in your purse is a significant marker of social status and class.

These perceptions do not die. In the words of Jonathan MacArthur, a 26-year-old native of P.E.I. who lives in Toronto, “(The Belmont smoker) is a Torontonian who doesn’t mind spending money on an expensive pack of king sized charcoal filtered smokes. She has no idea what a charcoal filter means, but she doesn’t care. She likes to turn up on the weekends in Queen West; she probably only buys pink or black lighters.”

These cigarette brand stereotypes are not merely the product of our imagination: According to a study by the National Cancer Institute in the United States, “youth-popular (tobacco) brands convey an image of smokers of those brands as popular and admired. The companies believe that conveying that popular people smoke their brand motivates the choice of that brand.”

But if you can no longer clearly identify a brand, the social cachet associated with it ceases to exist. If the government institutes a new model in which tobacco logos are near impossible to make out, the social markers associated with those logos might erode — and with them, the appeal of smoking for people driven and seduced by brand identity. This is a very good thing. So, too, is the fact that Australia, the first country to institute a plain packaging policy in 2012, saw a noticeable drop in tobacco consumption.

In the end, it’s unlikely that plain packaging will dissuade tried and true addicts from buying cigarettes, or teens committed to the act. It’s also entirely possible that in the absence of explicit branding, young people will simply become more discriminating in the judgment of their peers. Who knows: maybe they’ll begin inspecting brand names on packs of cigarettes the same way they inspect labels on hand bags.

But it’s also entirely possible that the new world of plain packaging will dismantle popular assumptions associated with cigarette brands. And for the teen whose interest in smoking is purely status-driven, the thrill of lighting up will dissipate. Vices without perks lose their lustre fast.