Doctors have criticised the organisation responsible for protecting the nation’s health over its work with a vaping pressure group that is itself linked to the world’s largest multinational tobacco company.

Public Health England paid £40,000 for a series of YouTube videos co-produced by the New Nicotine Alliance (NNA) and held numerous meetings with the group, despite its ties to Philip Morris International, an investigation by the Bureau has revealed.

A strict international treaty, to which the UK is a signatory, severely limits contact between tobacco companies and ministers and public health officials, but the rules do not apply to the NNA, which says it campaigns for alternatives to cigarettes in order to protect public health.

It claims to be “completely independent” but has also described a proposed ban on smoking in the UK as “sinister” and naive. Moreover, a complex network links the group to the Foundation for a Smoke-Free World, an influential and well-funded organisation that the World Health Organization has branded a front group for Philip Morris.

The Foundation was set up in 2017 by Philip Morris, which pledged $1bn in funding over 12 years to the “independent body” to support research into alternatives to tobacco. However, many researchers have refused to accept grants from the Foundation, arguing that it is an attempt by the cigarette company to rehabilitate its image.

Until recently, two directors of a communications agency that has been granted more than $3m from the Foundation were also members of the NNA’s board.

When contacted by the Bureau, Public Health England said it would not have worked with the NNA if it had known about those links.

Martin McKee, professor of European public health at the London School of Hygiene and Tropical Medicine, said: “It is totally unacceptable for people with links to the tobacco industry to be engaged with official bodies involved in public health. This demands complete transparency and avoidance of anything that can, in any way, raise suspicions of inappropriate influence.”

The NNA said it did not receive any direct funding from the tobacco industry. Martin Cullip, the group’s chairman said: “We are a tiny organisation built on the work of volunteers trying to represent the interests of smokers and vapers who are at last finding a cheap, effective and pleasurable way of quitting smoking.”

Links between Public Health England and the NNA stretch back several years. In 2017 it commissioned the National Centre for Smoking Cessation and Training to co-produce a series of YouTube videos with the NNA. The films, which promote switching to vaping from cigarettes, have racked up almost 450,000 views. The NNA confirmed it had received £7,000 from the £40,000 contract.

In 2019, PHE’s head of tobacco control, Martin Dockrell, presented an academic paper written by Louise Ross, the vice-chair of the NNA, to regional directors of public health, commissioners, clinicians and stop smoking practitioners. Ross accompanied him to these meetings, and did not disclose her position on the board of the NNA in the paper. PHE also organised for Ross to speak to two NHS trusts on how vaping can help people quit smoking.

The NNA’s indirect links to the Philip Morris-funded Foundation are similarly long-term.

Up until July last year, the NNA was a member of the International Network of Nicotine Consumer Organisations (INNCO), which says it does not accept industry money but has received $100,000 from the Foundation.

Moreover, two former NNA board members, Professor Gerry Stimson and Paddy Costall, also ran Knowledge-Action-Change, a company that has produced reports and organised events funded by the Foundation since 2017. The company has received $1m and been granted $2m more.

The creation of the Foundation is part of a wider strategy by Philip Morris, which claims it wants to “unsmoke the world” and eventually stop selling cigarettes. It has offered to partner with the government to fund local stop smoking services and make more alternatives to cigarettes available in the UK.

Although Philip Morris’s offer was rebuffed as unethical by the Department of Health, the NNA “cautiously welcomed” the proposals at the time and said Philip Morris has “potential to deliver genuine benefits”.

More recently the NNA seems to have tried to distance itself from the Foundation, after leaving INNCO “due to differences concerning future strategy, including funding arrangements”.

Costall and Stimson have resigned from the board. Links to Big Tobacco remain, however, including through the NNA’s chairman Cullip, who campaigned against plain cigarette packs for an industry-backed group in 2014. Cullip joked in 2017 that he had a “pathological hatred of public health and tobacco control”. 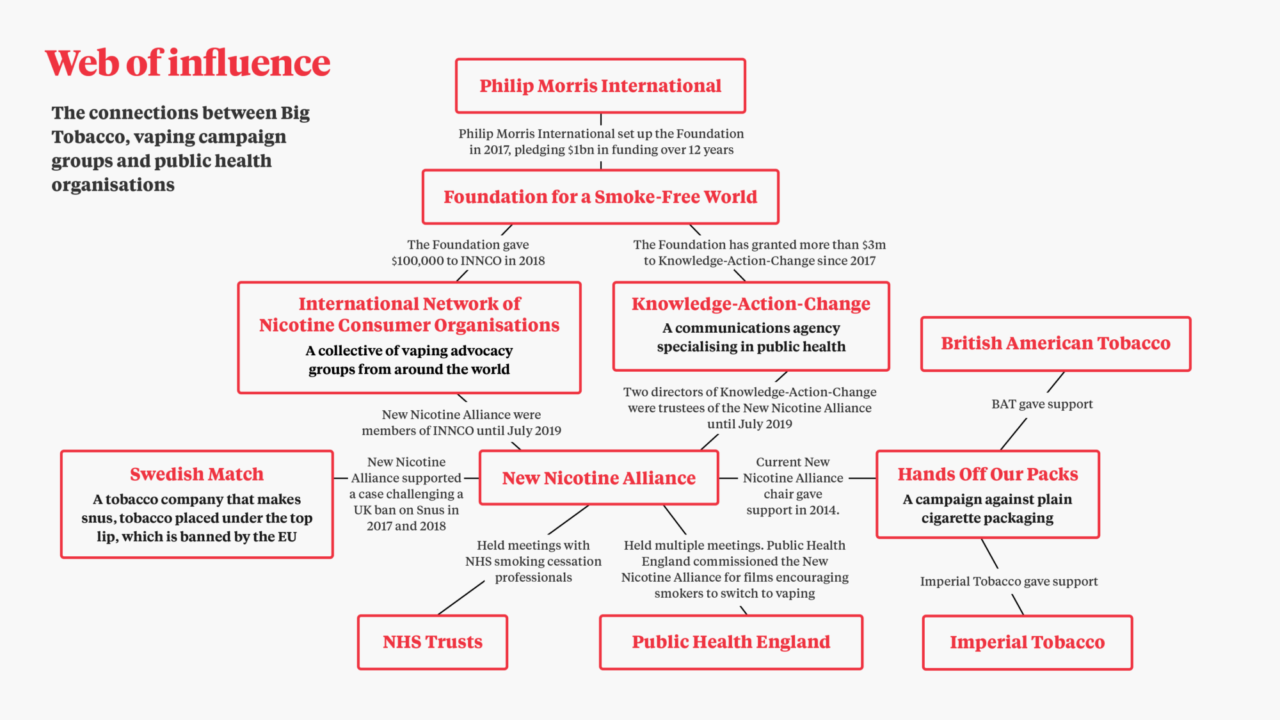 Stimson, a respected academic who has held posts at Imperial College London and the London School of Hygiene and Tropical Medicine, was the NNA’s chairman when it was established in 2015. At that time he already had links to a tobacco company; his company Knowledge-Action-Change had worked with Nicoventures, an e-cigarette subsidiary of British American Tobacco.

He remained on the NNA board until July last year. During that time, hundreds of thousands of dollars that can be traced back to Philip Morris flowed through Knowledge-Action-Change.

Stimson told the Bureau: “Knowledge-Action-Change focuses on harm reduction as a key public health strategy grounded in human rights. Our staff have over forty years of experience of work on drug use, HIV, sexual health, prisons, and now tobacco harm reduction. We want to see an end to tobacco-related death and disease.”

As a registered charity, the NNA is not obliged to reveal its donors but claims to be “completely independent of commercial interests in relevant industries”. It has said it “operates on an annual budget that would not even pay for the sandwiches at a typical public health conference”. But questions remain over the source of its funds. 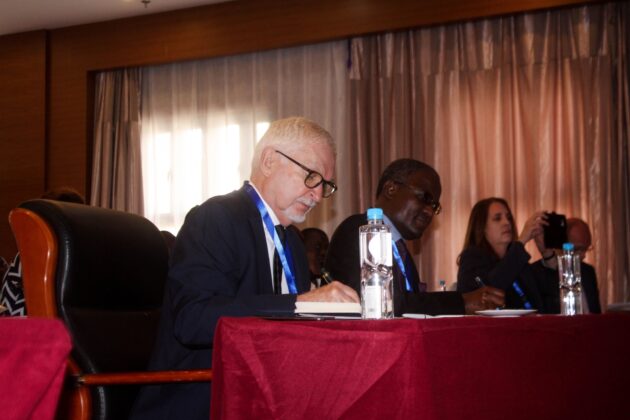 At the time of the event, Stimson was still on the board of the New Nicotine Alliance

Last year, NNA trustees attended events in cities across the UK as well as in Malawi, Kenya, Nigeria, Brazil, France, Sweden and Poland. A number of these events were organised by Stimson’s company and funded by the Foundation. The NNA also received the proceeds of a charity raffle at an e-cigarette trade expo held in London last year.

The NNA told the Bureau neither Knowledge-Action-Change nor the tobacco industry had paid for travel or hospitality on any of these trips.

Against smoking and against a smoking ban

When the government revealed its plans to make England “smoke-free” by 2030 in July, the NNA came out staunchly against them. It described banning cigarettes – the product the group claims it protects people from – as “sinister” and “a dangerously naive idea”.

It said the plan would only be feasible if the government and public health groups engaged directly with the industry, which is severely restricted by the World Health Organization treaty.

Cullip, the NNA’s chairman, also campaigned against plain packaging for cigarettes. In 2014, he was pictured delivering 2,500 letters to Downing Street with Hands Off Our Packs, a group supported by the cigarette companies British American Tobacco and Imperial Tobacco.

Health bodies in the UK continued to work with the NNA even after it supported a case brought by a tobacco company against the Department of Health in 2017.

Swedish Match, which sells smokeless products and until 2015 was in partnership with Philip Morris, argued against EU-wide rules that banned “snus”, a small bag of tobacco that is placed under the upper lip.

The NNA’s intervention in the case led some health groups to question its stance on the tobacco industry.

Documents released to the Bureau via freedom of information requests show officials at the National Institute for Health and Care Excellence (Nice) raised concerns about whether the group’s role in the Swedish Match case compromised its independence. The World Health Organization alleged the case suggested that the group was “working to further the interests” of the tobacco industry.

Cancer Research UK severed ties with the NNA last year over some members’ possible links to the tobacco industry.

Public Health England said: “We are grateful to the Bureau for revealing the NNA conflicts of interest and had we known of these in 2016 we would have ensured they were not sub-contracted on the project.”

Cullip said: “We represent the interests of millions of ordinary people who are taking the initiative to improve their own health at their own expense by quitting smoking and yet are facing a giant worldwide campaign led by lavishly-funded American prohibitionists to stop them.”

The tobacco industry, McKee said, “exerts its influence in many ways, often hidden from public gaze. Most recently, concerns have centred on its role in the e-cigarette business, where it seeks to portray itself, bizarrely, as part of the solution to the smoking epidemic. Governments have committed to shunning this industry under an international health treaty, but there is a need for constant vigilance.”