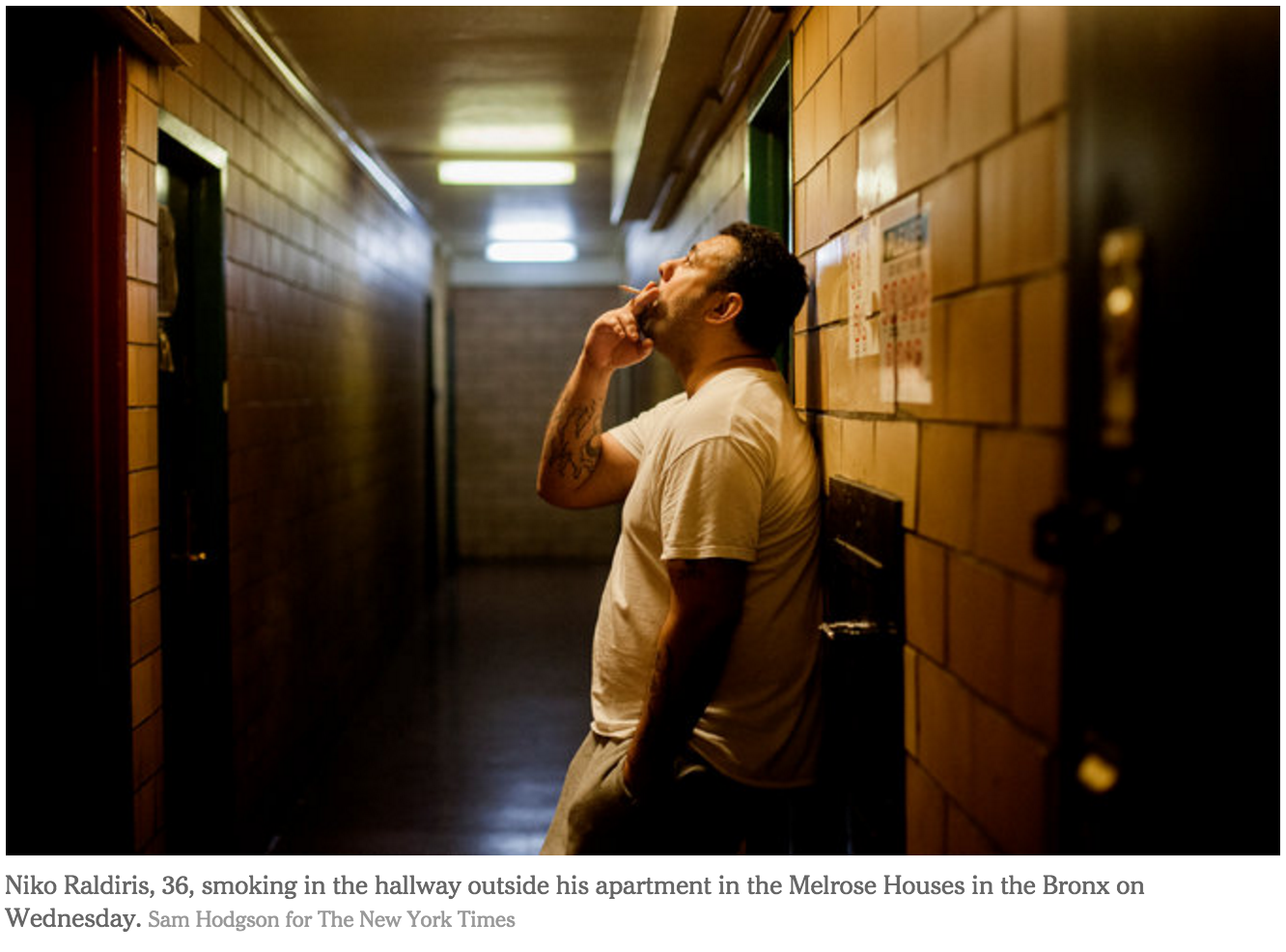 Smoking would be prohibited in public housing homes nationwide under a proposed federal rule announced on Thursday, a move that would affect nearly one million households and open the latest front in the long-running campaign to curb unwanted exposure to secondhand tobacco smoke.

The ban, by the Department of Housing and Urban Development, would also require that common areas and administrative offices on public housing property be smoke-free.

But the restriction on smoking inside dwellings would pose challenges to overburdened public housing agencies, which could face resistance from some residents resentful of losing control of what they can do in their own homes.

“What I do in my apartment should be my problem, long as I pay my rent,” said Gary Smith, 47, a cigarette in hand as he sat outside the door to a building in the Walt Whitman Houses in the Fort Greene section of Brooklyn.

The impact of the prohibition would be felt most heavily by the New York City Housing Authority, which is known as Nycha and houses more than 400,000 people in about 178,000 apartments. Though it is the largest public housing agency in the country, it has lagged behind many of its smaller counterparts in adopting smoke-free policies.

Since the federal government began to press for smoking bans in public housing in 2009, more than 600 agencies encompassing over 200,000 households have voluntarily barred indoor smoking. In moving to require the prohibitions across the country, federal officials say they are acting to protect residents from secondhand smoke, which can travel through walls and under doors; to reduce the risk of fires; and to lower building maintenance costs.

In New York, some luxury apartment buildings have prohibited smoking and have made a smoke-free environment a selling point. But many public housing agencies, including Nycha, are already struggling to maintain their properties and enforce existing rules. A smoking ban could, at least in the short term, add to those burdens.

“It’s a fraught process, because to do it properly you need community buy-in,” said Sunia Zaterman, executive director of the Council of Large Public Housing Authorities. “To do this successfully, it can’t be a top-down edict, because you want people to comply with the policy.”

On Wednesday, at public housing developments in the Bronx, Brooklyn and Manhattan, the proposal was welcomed by some people, but derided by others as an infringement on personal choices.

Mr. Smith, for one, expressed skepticism that a ban could be enforced. “You don’t know what’s going on in people’s apartment,” he said at the Walt Whitman Houses. He added, “What are they going to do, smell your apartment?”

At the Melrose Houses in the Bronx, Lesli Lino, 25, said that no one in her apartment smoked, but that many residents of her building, including a few on her floor, did.

“It’s horrible,” Ms. Lino said of the odor of smoke that often lingered in elevators and hallways. She said the ban would be a “plus to me.”

Shola Olatoye, the chairwoman and chief executive of Nycha, said, “For us, the major issue is our ability to enforce something like this.” Ms. Olatoye said she had yet to see the proposed rule but expected execution and enforcement to be handled by residents as well as by authority employees.

“It should be resident-led,” she said, adding that the Police Department should not be involved.

Smoking, which is already prohibited in the lobbies and hallways of authority buildings, has already caused friction between tenants and police officers, who have a large presence in many housing projects and are expected to watch out not only for crime but also for violations of authority rules.

Ms. Olatoye noted that in a 2012 residents’ survey conducted by the authority, 14 percent of 1,209 respondents said they smoked, 24 percent said at least one member of their household was a smoker and more than 35 percent said their household included a child with asthma or other respiratory problems.

“There’s clearly a need for addressing this issue head-on,” she said. “The question is, how do we do it?”

Smoking rates in the city have been declining, dropping to 13.9 percent of adults last year from 16.1 in 2013, according to the Department of Health and Mental Hygiene. The figure stood at 21.5 percent in 2002, when a city law banning smoking in workplaces, including bars and restaurants, was enacted. But disparities in smoking prevalence persist by education and income levels, health officials say, with higher rates among those having less than a college education and those from lower-income households.

A study by the federal Centers for Disease Control and Prevention estimated that a nationwide smoke-free public housing policy would result in annual cost savings of about $153 million, including $94 million in health care, $43 million in reduced costs for painting and cleaning smoke-damaged units, and $16 million in averted fire losses.

In their proposal, federal housing officials said that the surgeon general’s office had concluded that there was no risk-free level of exposure to secondhand smoke and that separating smokers and nonsmokers, building ventilation and cleaning the air could not eliminate exposure. That, officials said, could be accomplished only by eliminating smoking from indoor spaces.

The Council of Large Public Housing Authorities said smoking bans had become more popular with residents over time. One reason some authorities had already moved to adopt such bans, federal officials said, is that as the number of tenants who smoke has dropped, more people have come to expect smoke-free spaces. That has thrust public housing employees into the middle of disputes over secondhand smoke.

For Nycha, which has 328 developments across the city’s five boroughs, the proposal comes amid persistent budget deficits and declining federal subsidies that have prompted an urgent, and sometimes contentious, effort to increase revenue.

The proposed rule would require housing agencies to prohibit lit cigarettes, cigars and pipes in all living units, indoor common areas, administrative offices and all outdoor areas within 25 feet of housing and administrative office buildings. The rule would not apply initially to electronic cigarettes, but federal officials are seeking input about whether to ban them.

Individual housing authorities can be as restrictive as they want, extending the prohibition to areas near playgrounds, for instance, or making their entire grounds smoke-free, officials said.

The prohibition would be included in tenant leases, and violations would be treated like other nuisance violations, which are usually reported by neighbors or employees and are not meant to result in evictions, Mr. Castro said.

“The purpose is to go smoke-free and to have healthier communities,” he said. “My hope is that housing authorities would work with residents to prepare them for this change so that any kind of punitive measures like evictions are avoided at all costs.”

The public will have 60 days to comment on the proposal. Individual housing agencies would have up to 18 months from the effective date of the final rule to adopt and put their smoke-free policies in place after their own periods of public review and meetings with residents.

In the higher reaches of the real estate market, the smoke-free label can carry a premium, according to NYC Smoke-Free at Public Health Solutions, an advocacy and educational group. A recent analysis by StreetEasy, the New York real estate-listings website, for NYC Smoke-Free found that fewer than 4 percent of listed rental apartments were in buildings with smoke-free protections, said Patrick Kwan, the group’s director. But buildings that are smoke-free, the data showed, rented for $1,000 to $1,300 more than comparable units, he said.

“Smoke-free housing is definitely the next frontier in tobacco control efforts, and this is something where we can make an enormous difference for hundreds of thousands of New Yorkers,” he said of the federal proposal.