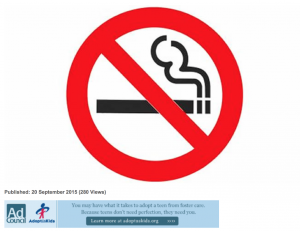 SMOKING in public will attract a fine of $500 or six months in jail after the country has aligned the Public Health Act on Tobacco Control Regulation 264 of 2001 with the World Health Organisation statutes, an official has said.

The deputy director Alcohol and Drug Abuse in the Ministry of Health and Child Care, Mrs Docas Sithole, said Zimbabwe became an affiliate member of WHO on Tobacco Control in March this year and some of the prerequisites were to align the tobacco control policies with the international board’s regulations.

“According to Public Health Act on Tobacco control regulation 264 of 2001 smoking in public places such as public transport, public halls, public gatherings, eating places including on the streets is an offence. All public smokers would be prosecuted. The offence attracts a $500 fine or a custodial sentence not exceeding six months,” she said.

Passive smoking has been linked to lung cancer because second-hand smoke contains more than 4 000 chemicals, many of which are irritants and toxins, and some of which are known to cause cancer.

Mrs Sithole said the ministry was also awaiting approval of a general national alcohol control policy which will make alcohol abuse and excessive consumption an offence.

The proposed Bill reads, “A person will not be allowed to have more than 0,08 percent blood alcohol concentration in his/her bloodstream and anyone found to have exceeded this level risks being arrested.”

“The Bill awaits approval and once approved the policy regulates how much alcohol an individual should consume in licensed public places.”

Mrs Sithole said the ministry had noted that there has been an increase in the abuse of drugs mainly by youths below the age of 35. She said drug abuse cases became rampant following the introduction of the multi-currency system in 2009.
Read more: http://www.harare24.com/index-id-news-zk-35566.html#sthash.i55YaZVh.dpuf