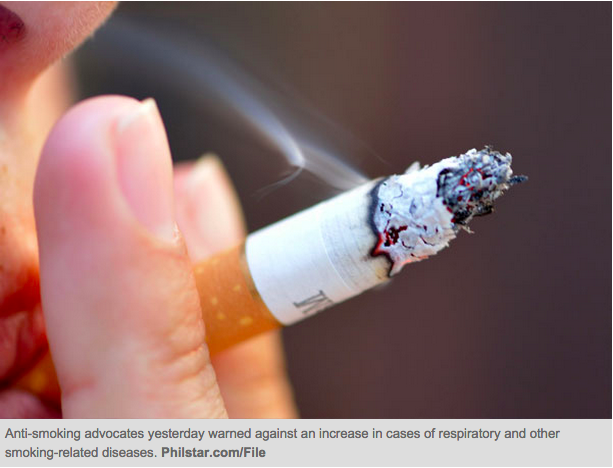 MANILA, Philippines – With the looming entry of cheaper cigarettes in the market, anti-smoking advocates yesterday warned against an increase in cases of respiratory and other smoking-related diseases.

New Vois Association of the Philippines (NVAP) said the availability of cheaper brands of cigarettes in the market would allow more people to splurge on their smoking vices.

Allowing more to smoke will be counterproductive since more can develop diseases from smoking and more will need to get treatment that will be shouldered by the government, NVAP president Emer Rojas said.

According to Rojas, allowing the sale of cheaper cigarettes would also put to waste the gains of the sin tax law or Republic Act 10351.

The imposition of higher tax rates for tobacco products since 2013 resulted in higher prices of cigarettes.

It is the sin tax laws goal to make cigarette products inaccessible to the people, especially to the poor and the youth. How can having cheaper brands prove to be helpful to the peoples health? Rojas said.