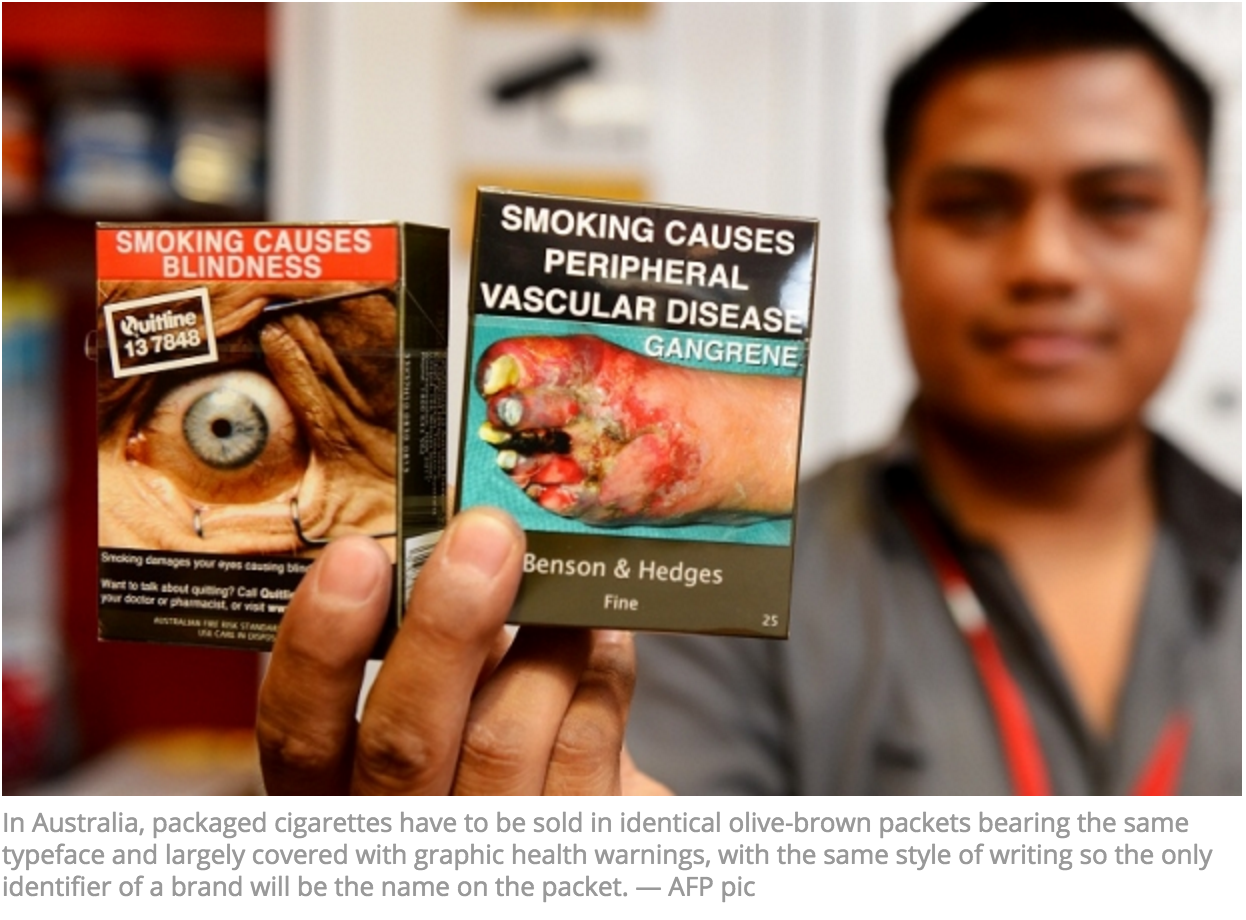 KUALA LUMPUR, Feb 24 — Malaysia is planning to introduce generic packaging for tobacco products in a bid to reduce consumption, with standardised colours and fonts to reduce brand recognition, the Health Ministry said.

“We are planning to do that in stages, but at this moment, we don’t have a firm date,” Dr Chong told Malay Mail Online.

The World Health Organisation’s (WHO) theme for the World No Tobacco Day on May 31 this year is “Get ready for plain packaging”.

Australia was the first country to implement plain packaging for tobacco products in December 2012, where tobacco company logos on cigarette packets are outlawed and the packets are a dull brown colour dominated by large graphic images of smoking-related diseases, with the brand name in standardised font.

Ireland, the United Kingdom and France passed laws last year to implement plain packaging from May this year, according to WHO.

“The drop in the smoking rate shows that the plain-packaging law enforced at the end of 2012 — as well as the 25 per cent tax increase Australia instituted in 2010 — works,” said WHO.

Malaysia banned all forms of direct tobacco advertising in 2003, with temporary exemptions for selected sport sponsorships. In 2008, it introduced graphic warnings on tobacco packaging.

The local prices of cigarette brands under British American Tobacco went up last November, reaching up to RM18 per pack, following a hike in excise duties of over 40 per cent.

When asked if the Trans-Pacific Partnership (TPP) agreement that Malaysia has signed would affect the government’s move to enforce plain packaging on tobacco products, Dr Chong said the free trade treaty has yet to be tested.

According to UK paper the Guardian, Philip Morris failed last December in its lawsuit against the Australian government to challenge the country’s plain packaging laws that the tobacco giant said had breached an Australian bilateral trade agreement with Hong Kong.

The case was among those cited by critics of the investor-state dispute settlement (ISDS) mechanism that is contained in the TPP.