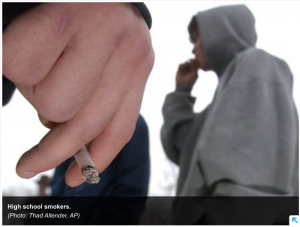 22 March, 2016
When California lawmakers voted this month to raise the legal age to buy cigarettes from 18 to 21, they joined Hawaii and more than 100 localities in seeking a new way to prevent vulnerable teenagers from getting hooked.

Almost everyone who smokes started by age 18, research shows. The tobacco industry, among the world’s slickest marketers, has known and used that fact to its benefit for decades. “Raising the legal minimum age for cigarette purchaser to 21 could gut our key young adult market (17-20) where we sell about 25 billion cigarettes,” a Phillip Morris report noted in 1986.

This suggests that raising the age is worth a try. Gov. Jerry Brown, D-Calif., ought to sign the measure, and careful study is warranted to find out to what degree the change  affects teen smoking.

Parents and public health advocates shouldn’t get their hopes too high. Teenage behavior is unpredictable and resourceful; many teens use fake IDs to buy alcohol and no doubt would do the same for tobacco. But unless a few states make the change, the value can’t be calculated. Right now, all but five states set the legal purchase age at 18. In Alabama, Alaska, New Jersey and Utah, it is 19. Hawaii went to 21 on Jan. 1.

Although smoking rates among high school seniors have fallen drastically, from 33.5% in 1995 to 11.4% last year, that still leaves millions of adolescents addicted and vulnerable in later years to cancer, heart disease and premature death. Raising taxes, running anti-smoking ad campaigns, and making smoking less cool  have worked, but more is needed.

Last year, the respected Institute of Medicine projected that if the legal age were raised to 21, by the time today’s teenagers became adults smoking prevalence would be cut by 12%. The greatest impact, the IOM found, would likely be among teens 15 to 17. Meanwhile, other avenues of getting cigarettes are drying up: Vending machines have all but vanished, and less than 10% of stores sell illegally to minors.

Plenty of reasons exist to try to cut further into youth smoking. Nicotine exposure during adolescence is likely to adversely affect cognitive function and development. Adolescents are more prone to addiction than adults because parts of the brain most responsible for decision-making, impulse control and susceptibility to peer pressure are still developing. As for the health effects, the risks for smoking-related illness rise not only with the number of cigarettes smoked per day but also with the number of years a person smokes.

The most persistent argument against raising the age is that at 18, people have the right to marry, to vote and to serve in the military, so they should be able to choose to smoke. But society does set 21 as the age for another dangerous activity, drinking alcohol — a change that has prevented about 900 drunken driving deaths per year. Smoking is the public’s business, too: Everyone helps pick up the tab for the enormous health care costs of tobacco-related illnesses.

In Finland, daily smoking dropped significantly among 14- to 16-year-olds after the legal age was raised from 16 to 18 and enforcement was bolstered. There’s no comparable research in the United States, which is precisely the point. Given the tobacco industry’s success in getting young people hooked, teenagers deserve to find out whether the U.S. has been missing a powerful tool to save their lives.

USA TODAY’s editorial opinions are decided by its Editorial Board, separate from the news staff. Most editorials are coupled with an opposing view — a unique USA TODAY feature.

To read more editorials, go to the Opinion front page or sign up for the daily Opinion e-mail newsletter.