Regional alliance warns, the ITGA is hazardous to truth and COP5

SEOUL, South Korea-12 November 2012: As the Fifth Conference of the Parties (COP5) to the WHO Framework Convention on Tobacco Control (FCTC) opens in Seoul, South Korea, the Southeast Asia Tobacco Control Alliance (SEATCA) warns delegates that the International Tobacco Growers Association (ITGA) is up to no good, and should be wary of the ITGA’s tactics: to deceive and disrupt the global public health advocates efforts to put in place strong tobacco control policies.

SEATCA Director Bungon Ritthiphakdee, speaking from the opening in Seoul said: “We have to remember that in 2010 the ITGA promised to ‘spoil the party for WHO’ at COP4 in Uruguay. Since then, the ITGA has been working to agitate farmers and foment a pro-tobacco line across the globe with misinformation and outright lies.”

The ITGA is a tobacco industry front group sponsored by, among others, British-American Tobacco, Philip Morris International and Imperial Tobacco International. On the surface it claims to champion the rights of farmers, but in reality it fronts tobacco industry interests and opposes effective tobacco control measures.

This year the ITGA is focusing on rallying farmers to oppose the adoption of the draft report on Articles 17&18 at COP5. Its main strategy is to mobilise farmers by providing them misleading information and creating fear that their livelihoods are threatened. The group has been instigating farmers by holding regional forums, in Malaysia in March and the Philippines in September, releasing false information in press statements, and attempting to undermine the legitimate process of the COP. Below SEATCA exposes the misinformation from the ITGA’s activities in the ASEAN:

Smearing the WHO, FCTC and the report on Articles17&18 with false claims

ITGA accuses WHO of “forcing tobacco growers out of tobacco through punitive measures”. A huge piece of misinformation that the ITGA perpetuates is that a report on FCTC Articles 17&18, which outlines support for economically viable alternatives for tobacco farmers, along with protection of farmers’ health and the environment, is being undertaken by the WHO. This is false. The report is prepared by a working group made up of governments that are Parties to the FCTC.

The ITGA resorts to crass name-calling, such as “planet bureaucrat”, “urban bureaucrats” and “draconian measures” to discredit WHO, as well as to dismiss the work of the legitimate inter-governmental process of the COP. Farmers then echo these terms in statements and protests in their own countries.

The governments of the Philippines, Thailand and Vietnam are members of the Article 17&18 Working Group, yet the ITGA has rallied tobacco growers in these countries to object to the report. The ITGA’s member for Malaysia is a government agency, the National Kenaf and Tobacco Board.

ITGA head Antonio Abrunhosa, who grows tobacco “in his free time”, repeats in all his statements, interviews and tweets that there are no alternate crops to tobacco: “Still have not found alternative crops to replace tobacco cultivation”. This is misinformation.

In reality, Malaysian tobacco growers are shifting to alternate crops, a programme coordinated by the government since 2005. The Malaysian deputy minister of plantation industries and commodities said in March this year that Malaysian tobacco farmers are transitioning to kenaf (hibiscus cannabinus), and that his government is providing incentives to farmers (US$751.00 per hectare [RM2,300.00], along with bonus and other assistance) to grow the crop.

The National Kenaf and Tobacco Board looks after all tobacco farmers, ensuring their tobacco leaves are purchased. Additionally for 2012, the Malaysian Government has allocated RM20 million under a special fund for kenaf growers to cultivate 5,000 hectares of the crop.

While ITGA’s website claims there are only about 3,000 tobacco growers in Malaysia, the local ITGA rep urged the government to reject the “absurd” guidelines proposed by the WHO, claiming that the main source of income for some 15,000 local tobacco growers is at stake. http://www.thesundaily.my/news/509330

The ITGA claims to represent 30 million farmers globally, an impressive figure for the media but difficult to verify. The ITGA’s Asia Chapter also claims to represent the region’s 34 million tobacco farmers and farm workers:http://www.saveourfarms.org/news/.

The statistical gymnastics continue in the Philippines, where the ITGA’s website says there are 168,083 tobacco growers, its Asia chapter claims the FCTC affects around 55,000 tobacco farmers, and yet another statistic claims that 2.9 million Filipinos are directly employed tobacco growers or dependent on the crop.

The ITGA’s Asia website claims: “In many countries and regions tobacco is the local economy”. In reality, in Asian countries tobacco growers generally raise other crops too, so tobacco acreage forms a minute part of total agricultural land, averaging less than 0.2 percent: Malaysia 0.17 percent, Philippines – 0.19 percent, Thailand – 0.2 percent and Vietnam – 0.19 percent, according to the Tobacco Atlas.

The ITGA also says, “Measures in Art 17&18 are absurd because demand is going up – 1 billion to 1.6 billion smokers, and farmers are there to supply that demand”, thereby confirming what tobacco control advocates have been saying all along – FCTC measures won’t put farmers out of a job overnight.

ITGA uses emotive terms to describe the impact on the livelihoods of tobacco farmers and all who depend on them, such as: “these measures will have a huge devastating effect on the lives of millions of growers” and “our families and business under threat.” In the Philippines, the rallying cry is more desperate: “Save our farms. Save our jobs. Save our way of life.”

We observe the ITGA’s poor tobacco growers are highly proficient in English, are media savvy and, more recently, technologically superior as they collect signatures online and tweet their woes. Who is really writing their press releases, letters to editors, petitions to governments and financing their trips abroad?

The ITGA is aiming to repeat what it did in Uruguay 2010: hand over a stack of signatures to the FCTC Convention Secretariat, apply undue pressure on the COP and provide scores of poor tobacco farmers a pricey week’s stay in a foreign country.

Meanwhile Framework Convention Alliance (FCA) members led by Ms. Paula Johns, Chairman of the FCA, had a ceremonial unveiling of the Death Clock, Sunday—revealing close to “63 million global tobacco deaths from tobacco-related diseases since the opening of the first WHO FCTC working group on 28 October 1999″ (ENDS). 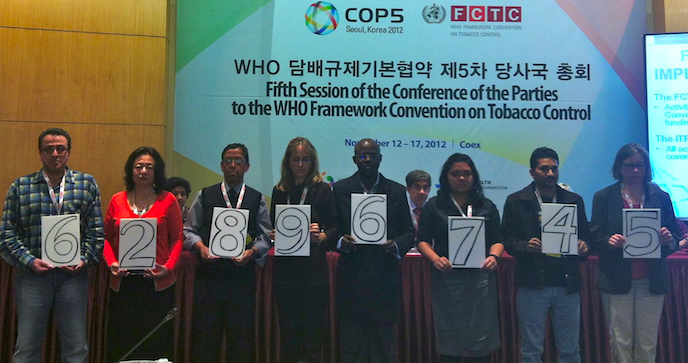