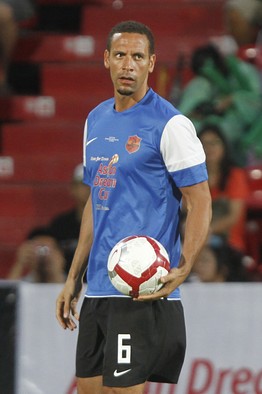 Reuters
Manchester United’s Rio Ferdinand holds a ball during the charity match in Nonthaburi province, on the outskirts of Bangkok.

Indonesia’s tobacco companies are no stranger to controversy – particularly after videos of chain-smoking Indonesian toddlers surfaced on YouTube, garnering millions of hits across the world.

Now, one of the country’s top producers of cigarettes, Gudang Garam International, is catching flak from anti-smoking activists for an advertisement starring popular Manchester United and England football player Rio Ferdinand. Mr. Ferdinand recently appeared on an advertisement on local billboards in Indonesia and in a 30-second commercial, uploaded by the company on YouTube, in which he wears a jersey with one of the cigarette company’s logos and charges running into a football stadium.

The YouTube channel belongs to Internet-based sports channel Gudang Garam Intersport – referred to popularly as Intersport – which is sponsored by the tobacco company and which screens English Premier League games, among other sports.

On Mr. Ferdinand’s home turf, in the U.K., fans and press have criticized his involvement in the advertisement and his apparent support for the company, one of Indonesia’s largest producers of cigarettes. Some anti-smoking advocates in Indonesia are also unhappy about the participation of Mr. Ferdinand, who is active as a supporter of global children’s advocacy group and charity Unicef.

[Mr. Ferdinand] is a “major role model for children and adolescents in Indonesia,” said Merdeka Sirait, chairman of the National Commission for Child Protection (Komnas Anak), according to the Jakarta Globe. The group has also demanded that Manchester United remove the promotion.

A spokeswoman for Manchester United apologized for what the organization has labeled as a “misunderstanding” and said it will “endeavor to ensure that it is not repeated in the future,” according to reports in The Guardian and other British newspapers. The spokeswoman further said that Mr. Ferdinand’s current advertising contract with the cigarette company is valid until October 2012, though exact details of the contract were unavailable.

Representatives for Manchester United and Mr. Ferdinand did not immediately respond to requests for comment from Southeast Asia Real Time. It was also unclear whether Mr. Ferdinand knew he was wearing the logo of Gudang Garam International or one for Intersport, the online sports channel. The logo in question on Mr. Ferdinand’s jersey is one used by Gudang Garam in promoting Intersport, but while it includes the tobacco company’s name, it is different from the one Gudang Garam uses on its cigarette packs.

Other anti-smoking activists across Southeast Asia have blamed the company instead, criticizing Gudang Garam for devising an advertisement that “clearly targets the youth.”

“It suggests that it is okay to smoke, while you are in sports,” said Bungon Ritthiphakdee, director of the Southeast Asia Tobacco Control Alliance. “Hopefully Mr. Ferdinand can… be made aware of how the tobacco industry is exploiting his healthy and wholesome image to influence the same youth, who look up to him as a role model for healthy and active living.”

Efforts to obtain comment from Gudang Garam were unsuccessful.

Indonesia’s laws governing tobacco advertising are looser than many other countries. Unlike other Southeast Asian nations, Indonesia hasn’t signed on to the World Health Organization’s Framework Convention on Tobacco Control, which aims to set standards for the use of tobacco worldwide, limiting its use and health impact.

In 2010, Gudang Garam was the 5th largest advertiser in all of Indonesia, spending RP $874 billion (US$93 million) on advertisements – an 89% increase from the year before.

The Indonesian government has taken some steps popular with tobacco-control advocates. It recently announced that all cigarette packaging should be at least 40% covered with health warnings, though the rule hasn’t yet been implemented, and some activists want to see even tougher steps – such as higher taxes on tobacco products.

Cigarettes in Indonesia are among the cheapest in the world, at RP 6, 000 (US$1) according to data from the Southeast Asia Initiative on Tobacco Tax.