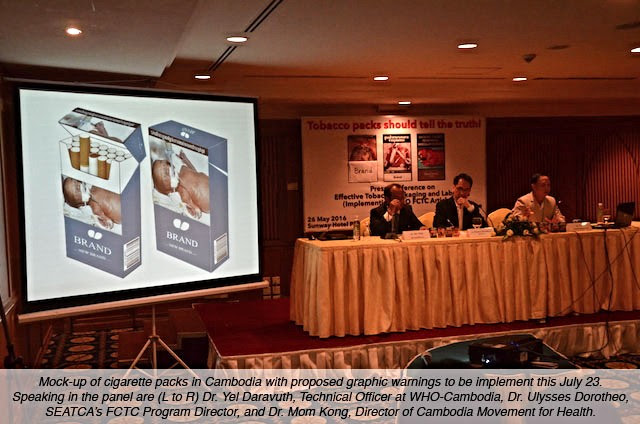 Cambodian smokers will see scary, graphic warnings on cigarette packs starting 23 July 2016, nine months after cigarette companies were given time to comply with the requirements in the PHW sub-decree signed in October.

This was announced during the Effective Tobacco Packaging and Labelling Press Conference organized by the Cambodia Movement for Health (CMH), WHO-Cambodia and the Southeast Asia Tobacco Control Alliance (SEATCA) on 26 May.

According to Dr. Mom Kong, director of CMH, graphic warnings in Cambodia will cover 50 percent of the front and back of the packages and will be accompanied by an anti-smoking message written clearly in Khmer.

Dr. Yel Daravuth, technical officer at WHO-Cambodia said that graphic warnings have shown to be effective in other countries such as Thailand, which has seen a roughly 20 percent increase in the number of smokers interested in quitting over the last few years. He also added that they are also effective for people who can’t read noting Cambodia’s low literacy rates.

An estimated 10,000 people die from smoking-related illnesses in Cambodia each year.  Large, graphic warnings are the most cost-effective means to inform smokers and non-smokers about the health hazards of smoking, to encourage quit attempts and to discourage smoking initiation.