LOUISVILLE, Ky. — Alex Carll was presenting his research about the impact of e-cigarette smoke on mouse hearts at an American Heart Association conference when a man from Juul Labs approached him and started asking questions.

“He seemed genuinely concerned about the health implications of Juul,” said Dr. Carll, who recalled meeting the e-cigarette company’s medical liaison, Jeff Vaughan, in November as he stood by a poster of his research findings. “He said they were looking for people to collaborate with and that they could offer up to $200,000.”

As a 37-year-old assistant professor of physiology at the University of Louisville medical school, with his eyes on his own research lab, Dr. Carll was tempted.

“Two hundred thousand is a lot, just for supplies and equipment,” Dr. Carll said. “That would get me off the ground and running.”

Wary of hurting his reputation, however, Dr. Carll turned Juul down.

That scenario is playing out at medical conferences and universities across the country, as the company aggressively recruits scientists to prove to the Food and Drug Administration, and to the public, that “juuling” offers more public health benefit than risk. If it fails to submit proper evidence by 2022, the agency could halt all sales.

Company representatives have been stalking e-cigarette researchers at conferences, blitzing speakers with emails and phone calls to ask for meetings and slides, and offering tantalizing amounts of money for academics.

But rejections like Dr. Carll’s have created a troubling cycle for Juul, whose popular vaping products have contributed to what health officials have called an epidemic of e-cigarette use and nicotine addiction among teenagers. Because many researchers have spurned the company’s lucrative offers, Juul has had to rely on scientists with tobacco industry ties — further damaging the company’s credibility and making it even tougher to attract independent investigators.

“They kept emailing me over and over,” said Belinda Borrelli, director of the Center for Behavioral Science Research at the Henry M. Goldman School of Dental Medicine at Boston University, and a longtime smoking cessation scholar. “They wanted me to do a trial for them. They did email me last year, too, and they emailed me in February and they emailed me in April. And then they left a couple of voice mails for me.” 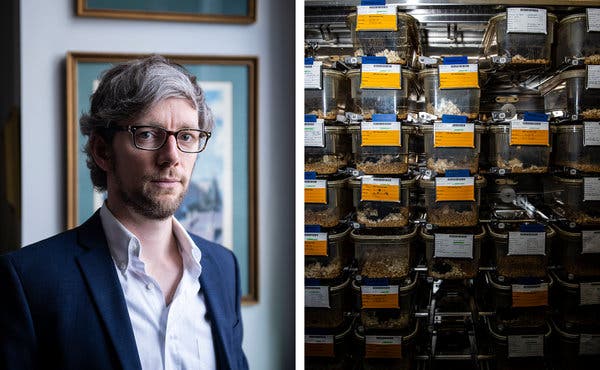 Dr. Alex Carll, left, and research mice at the University of Louisville. “Two hundred thousand is a lot,” said Dr. Carll, of the amount Juul Labs was offering to do research for the company.CreditLeah Klafczynski for The New York Times

Dr. Borrelli did not call the company back. Neither did Dr. Carll’s mentor, Aruni Bhatnagar, a medical school professor at the University of Louisville and a co-director of the American Heart Association’s e-cigarette research program; or Dr. Martin Tibuakuu, a resident physician at St. Luke’s Hospital in Baltimore; or Dr. Mohammadhassan Mirbolouk of Johns Hopkins University School of Medicine, among others.

Juul has managed to recruit a few high-profile scientists, among them Erik Augustson, formerly of the National Cancer Institute. A Juul spokeswoman, Lindsay Andrews, said the company was committed to top-notch scientific research.

Ms. Andrews also says that Juul has agreements to fund work at three American universities, but she would not disclose which institutions were involved. Several people within the company said the institutions were fearful of controversy if their names were revealed.

Juul’s predicament is made worse by the bans that many universities have on accepting funding from the tobacco industry. Juul considers itself an e-cigarette company, but since selling a 35-percent stake to the tobacco giant Altria, maker of Marlboro cigarettes, last year, some universities are not so sure.

Ms. Andrews acknowledged the problem posed by the $12.8 billion investment from Altria.

“Altria’s minority investment has created a potential conflict with some institutions’ no-tobacco policies, and we are actively addressing those issues as they arise,” she said. “We certainly understand the skepticism that comes with a category like ours, particularly in light of how historical tobacco companies have used science and misinformation in the past.”

Inside Juul there is anxiety about the science program. One of Juul’s co-founders, James Monsees, complained last fall to Dr. Robert K. Jackler, a professor at the Wu Tsai Neurosciences Institute at Stanford, that research scientists were rejecting the company’s offers, both Dr. Jackler and Juul confirmed. (Dr. Jackler said the company had not tried to recruit him.)

Dr. Bhatnagar was relieved that his protégé, Dr. Carll, declined a grant. Other members of his team have also spurned the company’s approaches, he said.

“Juul is never going to have credibility,” Dr. Bhatnagar said. “I feel bad about that, but what I feel worse about is that they are trying to extract information from our students and fellows, enticing them with little peanuts, so they can start a dialogue. It’s a little nefarious.”

Dr. Bhatnagar’s program, which includes researchers at several universities, has been given $40 million from the Food and Drug Administration to study the cardiovascular effects of tobacco products.

That is one of the areas that Juul wants to look into, along with how the device might be used for smoking cessation; what flavors are most appealing to youths; and dozens of other questions that the company must resolve before Aug. 8, 2022, the deadline to apply for F.D.A. approval to keep selling most of its products in the United States.

The task is becoming more urgent. The F.D.A. recently proposed moving the deadline up a year, and a case is pending in federal court that could set it even sooner.

Now, Juul must answer some tough safety questions to win F.D.A. approval. The company must prove its products are what is called a net public health good — that the benefits as an alternative to combustible cigarettes for adult smokers outweigh the risks of nicotine addiction, especially among minors. That requires hard scientific evidence.

Juul now has more than a 70 percent share of the e-cigarette market and employs about 2,200 people around the world, according to Ms. Andrews. She says 65 to 70 are researchers, including doctors, and others with Ph.D.s, M.B.A.s and other degrees.

The company recently started a science website promoting its new research grants. But so far, Juul has reported funding studies only by the Centre for Substance Use Research, based in Scotland, and collaborating with a few independent laboratories. The Glasgow organization, which has done most of Juul’s outside research, is well known to tobacco control advocates, who have long criticized its studies for playing down the danger of youth addiction to e-cigarettes.

On its website, the organization notes that for the past three years it has accepted money from Juul, Philip Morris International, British American Tobacco and e-cigarette makers like NJoy. Some critics contend that Juul’s funding has contributed to the unusual findings from a study it published in the May 1 issue of the American Journal of Health Behavior.

“They’ve never found anything that was contrary to the interest of the sponsoring tobacco company,” said Dr. Jackler, of Stanford, who studies the tobacco industry. “Many of their findings were at variance with a sizable volume of well-done scientific investigations at independent, reputable centers.”

The Glasgow center’s recent behavioral study of youth vaping prevalence and perceptions found that only about 4 percent of youths ages 15 to 17 reported vaping with Juul within the past 30 days; and less than 1 percent of younger children, ages 13 to 14, reported having done so. Only 45 percent of the older teenagers had heard of Juul before the survey.

These results contrast with the findings in a federal government survey, which prompted the F.D.A. to declare a youth vaping epidemic. That study reported that roughly 21 percent of high school seniors had used an e-cigarette within the last 30 days. Although the youth tobacco survey did not specify brands, the F.D.A. has declared Juul the most popular vaping product used by teenagers by far.

Christopher Russell, a psychologist and the deputy director of the center, who wrote the May journal article with the center’s director, Neil McKeganey, a sociologist, attributed the disparity between studies to different methodologies. The Juul-funded study relied on adolescents filling out an online form at home. In contrast, students in the government study filled out paper questionnaires in their classrooms.

Other Juul-funded surveys by the center found that nearly half of the 12,000 smokers who responded had quit cigarettes by using Juul, and that teenagers who had never used an e-cigarette had very low interest in using an e-cigarette in the eight flavors offered in Juul’s pods.

Many researchers who come in contact with members of Juul’s research staff have not been impressed so far.

Last fall, Dr. Mohammadhassan Mirbolouk was presenting a study at the heart association meeting showing that dual users of e-cigarettes and traditional cigarettes might be at higher risk of cardiovascular disease. He said a Juul representative approached him and used a smartphone to record a conversation, without permission, that Dr. Mirbolouk was having with another scientist.

“He asked me about my background, future career goals and my expertise,” Dr. Mirbolouk said. “I told him that I will start my internal medicine residency next year. So, he asked about my colleagues and if they are interested in doing collaboration and how he can provide us with equipment.”

Soon a second Juul employee approached, and asked a few questions about a poster that Dr. Mirbolouk used in his presentation. Then the discussion veered into a pitch for life at the juggernaut, which is based in San Francisco.

“He explained to me that he is making a lot of money,” Dr. Mirbolouk said, “and he is happy living in San Francisco.”