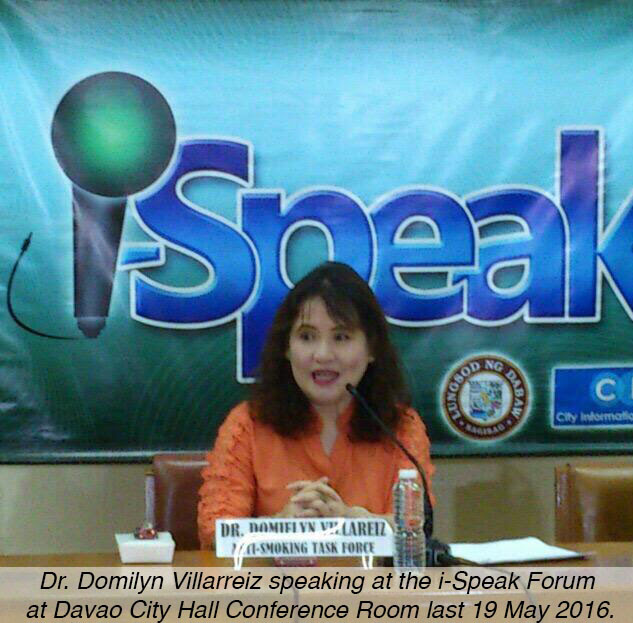 After the Philippines elected smoke-free champion and Davao City Mayor Rodrigo R. Duterte last 9 May, the Davao City Anti-Smoking Task Force headed by SEATCA’s Smoke-Free Program Manager, Dr. Domilyn Villarreiz,  is looking forward to see a smoke-free Philippines now that there are plans to replicate some of the city’s ordinances in the entire country.

Anti-Smoking Task Force chairperson Dr. Domilyn Villarreiz, during Thursday’sI-Speak forum at the City Hall conference room, said they will recommend some points for better implementation if Davao City’s Comprehensive Anti-Smoking Ordinance will be replicated in the country.

Some of the recommendations she mentioned are: 1. Amendment of the Republic Act 9211 (Tobacco Regulation Act of 2003), as it is not in compliance with the International Treaty on Tobacco Control; 2. Cities should make their own anti-smoking ordinance if the law is not amended; 3. Removal of the Philippine Tobacco Institute in the Inter-Agency Committee on Tobacco (IACT); 4. Removal of smoking rooms and smokers will be asked to smoke outside the establishments and away from public places.

Dr. Villarreiz added that it is not difficult to replicate the Anti-Smoking Ordinance all over the country because there are already 100% smoke-free cities, municipalities and provinces in the Philippines. The Smoke-Free Cities ASEAN Network (SCAN) – Philippine Chapter, in which Davao City is a founding member currently has 40 members.

The Anti-Smoking Task Force of Davao City will celebrate its anniversary on 31 May. Davao City has been recognized as the first Philippine city to implement an exhaustive anti-smoking ordinance.