(CNN)Shane Todd, a familiar face in the Centers for Disease Control and Prevention’s well-known “Tips From Former Smokers” campaign, has died from complications of cancer. He was 49.

Todd started smoking cigarettes when he was 18, and the habit caused throat cancer, with which he was diagnosed at age 34.
In a statement Wednesday, CDC Director Dr. Tom Frieden wrote, “Shane was so proud of the impact (of) the Tips campaign and his role in its success, noting recently, it was the ‘best feeling in the world knowing I have changed lives.’ “ 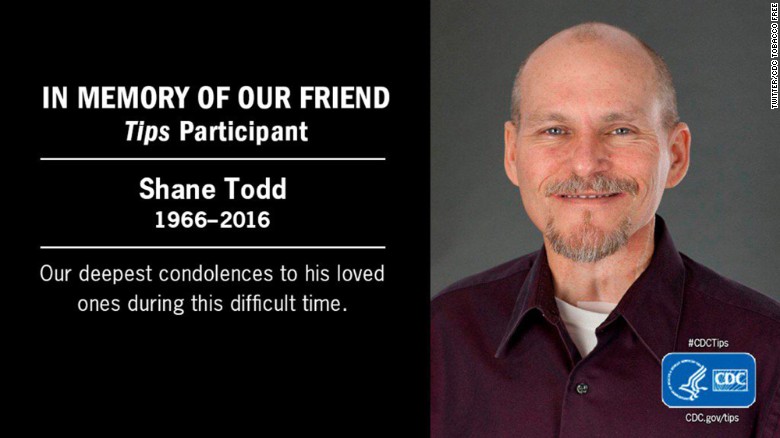 Todd, whose face appeared in televised campaign ads nationwide, underwent surgeries including removal of his voice box and parts of his esophagus. It left a hole in his neck, called astoma.

In the campaign videos, he explained how to crouch, not bend over, with a stoma and that you couldn’t use spray paint if you had one.

“Everybody in my family had smoked. My parents had smoked, my oldest brother had smoked, and up until I got sick, nobody had ever had problems from it,” Todd said in a 2013 video interview with the CDC.

“I honestly never thought I would ever have a problem at all, other than the fact that I couldn’t quite breathe as good as I used to, but,” he added, “boy, I was definitely wrong.”

The campaign launched in 2012 and started with eight television ads, seven radio spots, seven print ads, and five billboard and bus stop ads. Since its launch, two other participants in the campaign —Terrie Hall and Rosemary V. Hernandez — have died of cancer caused by smoking. Two other participants, Nathan Moose and Bill Busse, died from other complications associated with smoking or exposure to secondhand smoke.

People who smoke cigarettes are up to 30 timesmore likely to get lung cancer or die from lung cancer than people who do not smoke, according to the CDC. In the United States, more than 7,300 nonsmokers die each year from lung cancer caused by secondhand smoke.

In general, smoking rates have declined — and continue to drop — in the United States. Fewer than 15% of American adults smoke, according to government statistics from the National Health Interview Survey released last year. However, 40 million Americans still smoke, andcigarette smoking kills more than 480,000 people each year.

What might be the best way to stop smoking? A study published in the Annals of Internal Medicine in March suggests that quitting cold turkey may be more effective than when smokers gradually wean themselves off cigarettes.

The study involved 700 long-term heavy smokers in England, who each tried various methods and schedules to quit smoking, along with the help of nicotine patches. It turned out that nearly half of the study participants who tried to abruptly quit — 49% — were not smoking by one month within the program.