SINGAPORE: New restrictions on cigarette packaging will be introduced in Singapore, after amendments to the Tobacco (Control of Advertisements and Sale) Bill were passed in Parliament on Monday (Feb 11).

All tobacco products will be have to be sold in plain packaging – in a standardised colour and with all logos, brand images and promotional information removed.

Brand names and product names will be allowed, but only in a standard colour and font style.

Graphic health warnings will also have to be at least 25 per cent bigger than existing ones. 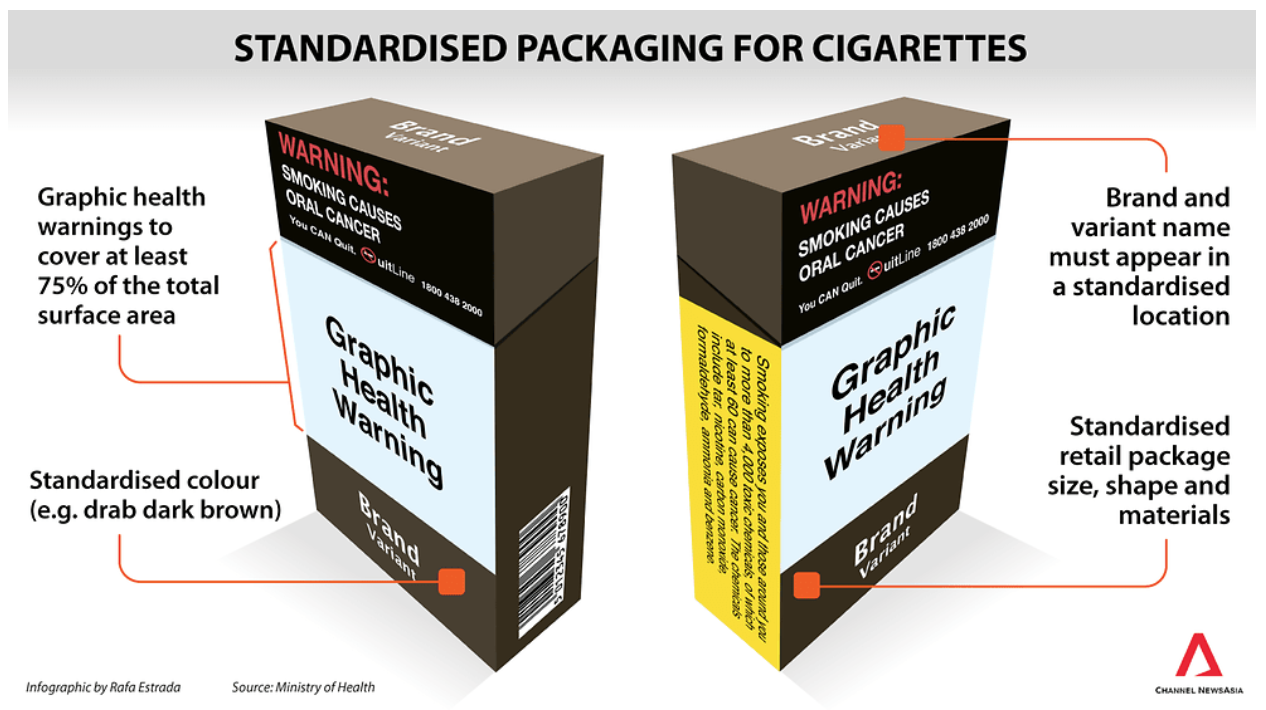 In moving the Bill for a second reading, Senior Minister of State for Health Edwin Tong said that more needs to be done to reduce tobacco use here.

He noted that one in five men in Singapore smoke daily, and that the male smoking rate is higher than in Australia, New Zealand, the United Kingdom and the United States.

More than 2,000 Singaporeans die prematurely from smoking-related diseases each year, he said.

Even though the smoking rate has been brought down in the past with measures like banning smoking in certain public places, restricting tobacco advertising and imposing taxes, the decline has been harder to sustain in recent years, said Mr Tong.

“The smoking rates have been fluctuating between 12 per cent and 14 per cent in the last 10 years, with no clear pattern of continuous decline,” he added.

“Clearly, we need to do more to stem tobacco use among Singaporeans, with a view to denormalising the use of tobacco products and bringing overall smoking rates to a level that is as low as possible.”

The amendments to the Bill come on the back of a ban on point-of-sale tobacco product displays which took effect in August 2017, as well as legislative changes to increase the minimum legal age for the purchase, use, possession, sale and supply of tobacco products.

The Ministry of Health (MOH) will brief industry stakeholders on the proposed specifications for the standardised tobacco packaging and discuss other operational implementation issues with them, Mr Tong said.

As with other changes relating to tobacco products, nine to 12 months’ advance notice is likely to be given, he added.

THE APPEAL OF BRANDED PACKAGING

Explaining the focus on packaging, Mr Tong said that cigarette packs serve as a “five-second commercial”.

“Evidence suggests that the appeal of branded packaging also acts as one of the factors encouraging children and young adults to experiment with tobacco and to establish and continue a habit of smoking,” he said.

A study carried out by the Health Promotion Board (HPB) to assess Singaporeans’ perceptions of current and plainer cigarette packaging appears to support such evidence.

The study found that attractive pack designs were associated with high quality cigarettes and increased likelihood of attracting youths to try such products, Mr Tong said, adding that among a “significant minority” of non-smokers, perceived pack attractiveness was associated with the intention to try smoking.

HPB’s findings from other local studies also indicated that packets with darker colour and with graphic health warnings that filled at least 75 per cent of surfaces were considered by Singaporeans to be least attractive. They were also perceived to be more harmful to health.

MPs who spoke on the Bill were generally in support of the amendments, but raised some concerns.

Chairman of Government Parliamentary Committee for Health Chia Shi-Lu asked if standardised packaging would lead to an increase in counterfeit tobacco products. He also asked if it would lead to “down-trading”, which describes a phenomenon in which there is a shift from more expensive tobacco products brands to lower priced alternatives in a market.

On the issue of advertising, Nominated MP Lim Sun Sun pointed out the use of what she described as “insidious social media campaigns” by multinational tobacco companies, which circumvent restrictions on tobacco advertising. Such campaigns, she explained, capitalise on the appeal of social media influencers through photographs featuring the influencers smoking in cool venues while wearing trendy clothing, accompanied by catchy hashtags.

Influencers are given strict instructions on which cigarettes to feature, how to take natural photographs which do not resemble advertisements, when they should post these images for optimal audience engagement, as well as the hashtags that they must use, she said. In one particular country, the influencers were even told to conceal the health warnings on the cigarette packs before posting the images.

“Such shady tactics are calculated to mislead young people into thinking that these images are organic social media content that simply reflect youth culture,” she said.

Professor Lim asked if there will be greater effort made to track the use of social media by tobacco and e-cigarette companies. She also asked if the ministry will work with the Advertising Standards Authority of Singapore to establish more concrete guidelines around the responsibilities of social media influencers with regard to full disclosure in cases of sponsored content by tobacco and e-cigarette companies.

Advertising was also a concern brought up by MP Gan Thiam Poh, who asked if MOH would consider requiring broadcast media to carry reminders of the harmful effect of tobacco in all screenings of videos, movies or drama productions, where scenes of smoking cannot be edited and cut.

Responding to the MPs’ concerns in his round-up speech on the Bill, Mr Tong said that MOH’s assessment is that the introduction of standardised packaging is “unlikely to materially contribute towards an increase in illicit trade in tobacco products in Singapore”.

“We arrived at this view after having carefully considered the arguments and evidence submitted by the tobacco industry on illicit trade to the public consultation,” he said. Mr Tong added that the local context is also important, as the prevailing form of illicit tobacco in Singapore is that of genuine but duty-unpaid cigarettes, as opposed to counterfeit cigarettes.

Mr Tong added that the contribution of standardised packaging to down-trading is likely to only be a modest one. Any impact that down-trading may have on increasing overall demand may also be addressed by policy measures to increase the absolute price of low-price brands, for example, by increasing tobacco taxes.

On advertising concerns, Mr Tong said that Prof Lim had raised valid points about what happens with the proliferation of social media. He noted that as it stands, tobacco-related advertisements in all forms of media are already banned, but agreed that the large number of different influencers and the carefully designed portrayal of images may make detection and enforcement a lot more difficult.

He added that the HPB also runs a “very extensive” public education campaign which is also done online and on social media.

“So apart from enforcing it through the rules which we have in place, we also want to amplify public education outreach on the same platform, with the same reach and hopefully to the same target audience as what these tobacco companies are trying to do,” he said.

As for broadcast media, he said there are existing content guidelines for media broadcasters to exercise due diligence in the depiction of smoking on TV, in movies and other media channels.

Nonetheless, he added that his ministry will study the suggestion to display anti-smoking messages or advertisements before films containing tobacco imagery are shown.

Rounding up his speech, Mr Tong said that the decision to introduce standardised packaging and enlarge the size of the graphic health warning was not taken lightly.

“We have given due consideration to the available primary evidence, consulted with experts in different fields, and sought the public’s views multiple times,” he said, adding that his ministry acknowledges the impact of the changes on tobacco and related industries, and has taken steps to mitigate that impact.