SINGAPORE: All tobacco products in Singapore may soon be required to be sold in plain packaging with graphic health warnings covering at least 75 per cent of the packet.

This comes after the Ministry of Health (MOH) announced on Wednesday (Oct 31) that it will introduce standardised packaging for such products sold in Singapore, as part of ongoing efforts for a tobacco-free society.

The ministry intends to table the proposed amendments to current laws early next year. If enacted, the new measures may take effect from 2020.

A transition period – between when manufacturers have to produce standardised packs and when retailers must sell all products in standardised packs – will be provided to allow a sell-through of old stock and to ease the implementation burden on the tobacco industry, it said.

“Tobacco use is a major cause of ill-health and death in Singapore,” MOH said in a press release.

“More than 2,000 Singaporeans die prematurely from smoking-related diseases annually. Daily smoking prevalence amongst Singaporeans has been fluctuating since 2004, with no clear pattern of sustained decline,” it added.

Under the proposal, the new measures will see all logos, colours, brand images and promotional information removed from the packaging of tobacco products, which can be sold only in a standardised colour and a matt finish.

Brand names and product names will be allowed, but only in a standard colour and font style.

Tobacco products must also display mandatory graphic health warning covering at least 75 per cent of the packet’s surface, up from the current 50 per cent. 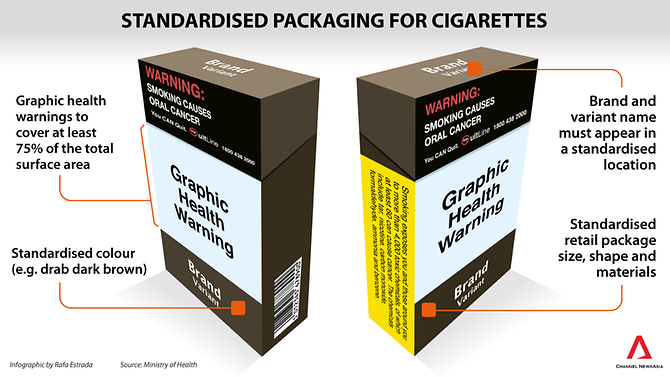 MOH’s proposed standardised layouts for tobacco products also dictate that the size, shape and material of all retail packages are standardised and open according to a standard format.

“It is the Government’s assessment that changes in consumption can occur as a result of reducing overall product appeal,” it added.

MOH said that the proposed changes – which come after an extensive review of international and local studies as well as three rounds of public consultations – are necessary to “achieve sustained declines in the overall smoking rates” in Singapore.

The proposed changes are likely to help it achieve five health objectives: Reduce the attractiveness of tobacco products; eliminate the effects of tobacco packaging as a form of advertising and promotion; reduce the ability of tobacco packaging to mislead about the harmful effects of smoking; increase the noticeability and effectiveness of graphic health warnings; and better inform smokers and non-smokers of the risks associated with tobacco use.

The proposed changes will also complement existing tobacco control measures in Singapore and discourage non-smokers from picking up the habit, encourage smokers to quit, and encourage Singaporeans to adopt a tobacco-free lifestyle, MOH said.

“It will operate alongside other tobacco control measures, including education, taxation, smoking cessation programmes, bans on tobacco advertising, the point-of-sale display ban and the minimum legal age for tobacco,” it said.

Singapore has taken multiple steps to curb smoking and the public’s exposure to second-hand smoke.

In February, the Government imposed a 10 per cent hike in tobacco excise duty, resulting in excise duties on cigarettes increasing to 42.7 cents per stick, up from 38.8 cents previously.

In March 2016, laws were passed to prohibit stores from displaying tobacco products.

To protect the public from second-hand smoke, the Government in October last year expanded an existing smoking ban to the outdoor areas of universities and private schools and in private-hire cars.

Steps are also in place to transform Orchard Road into a smoke-free zone by the end of this year.

There is growing momentum worldwide for plain packaging with a report by the Canadian Cancer Society in October showing that there are now 25 countries and territories moving forward with plain packaging, with nine having adopted the measure and 16 working on it.

However, the movement has also seen some opposition. In 2017, new rules for “plain packaging” in Malaysia and pictorial health warnings for cigarette packs in Myanmar, Laos and Cambodia were either stopped or delayed.

Australia was the first country to adopt the measures in 2012, banning logos and distinctively coloured cigarette packaging in favour of drab olive packets with brand names printed in small standardised fonts.

Since then, countries such as France, the United Kingdom, Norway, Ireland, New Zealand and Hungary have also introduced similar measures.

Another seven countries have passed laws yet to be implemented, namely Burkina Faso, Canada, Georgia, Romania, Slovenia, Thailand and Uruguay.