Emily Howard used to stand outside in wet, cold weather, shivering in the doorways of restaurants while friends talked and ate inside. But she has come in from the cold after quitting smoking earlier this year – and the graphic warnings on Australia’s hardcore new cigarette packaging helped her give up. 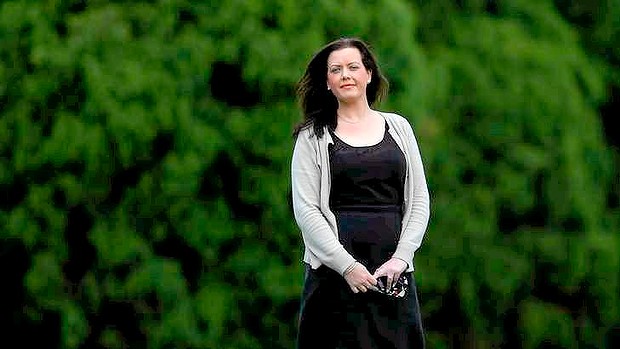 Howard, 26, a Department of Defence employee, started smoking at 15. She was embarrassed by the habit, she says, because her partner and most friends did not share it. She decided to give up when her mother, who was ”quite a heavy smoker”, got a blood clot in her leg. ”That was a bit of scare,” she recalls. ”She’s 51 and had been smoking for 40 years. She needed that push and I said I’d do it with her.”

At first, Howard says, she wasn’t fazed by Australia’s new plain cigarette packs, which appeared in December last year. But she found the gruesome pictures displayed on the packs – including the effects of mouth cancer, lung cancer and gangrene – morbid and distressing. ”In the end … one of the main reasons [I quit] was seeing those pictures,” she says. ”They were a constant reminder.”

When the federal government’s plain packaging legislation came into full force on December 1, 2012, 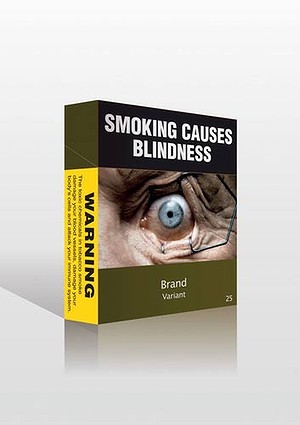 tobacco companies could no longer display brand logos or individual colours on their identical, olive green packets. Instead, 75 per cent of the front was covered in graphic health warnings, compared with 25 per cent previously.

These images included a confronting picture of 34-year-old Bryan Curtis who, reduced to skin and bones, died just six weeks after being diagnosed with lung cancer. The pictures of diseased smokers are being rotated every 12 months for maximum effect, with a new set of seven images currently being rolled out.

Australia was the first country in the world to introduce such strict packaging laws. Almost a year on, how are they faring?While health experts say it is too early to measure whether the plain pack policy is having the desired effect, there are encouraging signs. The Australian tobacco industry, however, vehemently writes off the impact of the new packaging – despite a drop in tobacco sales.

The tough new laws also face legal challenges from several nations who claim they flout international trade rules, with Indonesia most recently taking the matter to the World Trade Organisation. 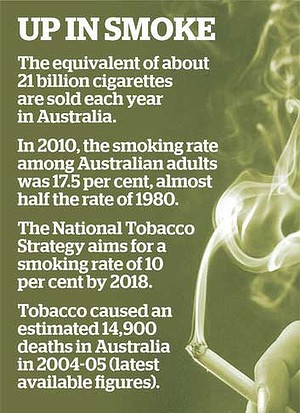 Imperial Tobacco has a smaller share of the market. In April, Imperial’s UK chief executive, Alison Cooper, said the Australian market had shrunk between 2 and 3 per cent since plain packaging, which was ”maybe not as bad as anticipated”.

Australian tobacco companies say this shrinkage merely reflects the long-term downward trend in sales. Rachel Elliott, the spokeswoman for Imperial Tobacco Australia, says the company has not seen any extra decline. ”It seems clear that the Australian government’s plain packaging laws will not have an impact on total tobacco consumption.”

BATA also says this drop is unremarkable. ”The legal tobacco market has remained stable,” spokesman Scott McIntyre says. ”There has been no initial impact … it’s clear that plain packaging regulation is not working.”

Jos de Bruin, spokesman for Master Grocers Australia, which represents 2300 independent supermarkets and liquor stores and opposes plain packs, says he does not have figures on tobacco sales.

”But the anecdotal evidence is there has been no change.”

But health advocates say it is disingenuous of tobacco companies to dismiss plain packs at this early stage. Simon Chapman, professor of public health at Sydney University, says those behind plain packaging never expected a big, sudden drop in sales.

”Measures like plain packaging, quit campaigns and price rises are all cumulative. No one thing is suddenly going to make the bottom fall out the market.”

The anti-smoking lobby group Action on Smoking and Health Australia says evidence won’t emerge for a couple of years. ”To make pronouncements in less than 12 months that it doesn’t work, [the tobacco companies] are showing disregard for the basics of research methodology,” spokesman Stafford Sanders says.

”They would not have opposed this so vehemently if they thought [plain packaging] wasn’t going to harm their sales.”

The Department of Health will complete a study of smokers and recent quitters in December 2014 to assess the short and medium-term effects of the packaging change.

One early study, funded by the Cancer Council and published in BMJ Open, found that plain pack smokers perceived their cigarettes to be poorer quality and less satisfying than branded pack smokers.

Public health experts hailed these results as promising. But the tobacco industry dismissed the study because it was carried out during the rollout of plain pack legislation, when some branded packs were still on sale.

Fiona Sharkie, executive director of Quit Victoria, says when plain packaging first hit the shelves, calls to Quitline jumped 30 per cent on the same time the previous year. The rate of calls then levelled out. Many callers mentioned the shocking health images, particularly Bryan Curtis, Sharkie says. About 80,000 calls are made to Quitline annually.

Plain packaging’s principal aim is to discourage people from taking up smoking. Health experts argue that youngsters and beginner smokers are those most likely affected by glitzy packaging and brand awareness. If it also encourages existing smokers to quit, that’s a bonus, the health lobby says.

Jeanette, 42, is a smoker who lives on the Mornington Peninsula (she did not want to use her surname). She has been battling a cigarette addiction for the past 26 years and says the new packaging has no effect on her.

”I stopped caring about what the packet looked like in my 20s,” she says. ”When I look at the [graphic] images it’s almost surreal. It’s such an addiction at my age that the packaging is no longer relevant.”

She spends an average of $60 a week on cigarettes. ”I have successfully quit four times, twice while I was pregnant and on two other occasions. Each time the period of non-smoking lasted approximately one to two years. [But] I always start smoking again in periods of stress,” she says.

”My children, aged eight and 10, both hate that I smoke because they are fully aware of how bad it is for my health. Plain packaging could work a little more effectively on teens and younger adults because self-image is more important at that age.”

WHEN the government’s pioneering laws were passed through Parliament in 2011, the tobacco industry took swift action to protect its interests. In August 2012, it lost the ensuing High Court action to stop plain packaging.

”The number one weapon in the arsenal of big tobacco is litigation,” says Sharkie. ”But so far they haven’t won.”

Still, the government faces ongoing legal threats on several fronts. Five countries have launched action against the laws through the World Trade Organisation, which may drag on for several years.

The latest, Indonesia, joined the fray only weeks ago. Honduras also recently escalated its case, while Cuba, Ukraine and the Dominican Republic have made initial representations, claiming the packets breach international trade rules and intellectual property rights.

Some international tobacco companies have provided legal support for these actions, drawing sharp criticism from the Australian government and anti-smoking campaigners.

When questioned about Philip Morris’ support, Argent says: ”[The company] is part of the broad coalition of the Dominican Republic’s tobacco sector that is supporting the government’s decision to challenge Australia’s measures.”

Philip Morris Asia is also involved in a separate stoush with the Australian government over the legislation, claiming that it flouts the bilateral investment treaty with Hong Kong. It has taken action through the UN Commission on International Trade Law. The case will take up to two years to resolve and the next hearing is scheduled for Singapore in February 2014. If the company wins, its compensation claim from the federal government could run into billions of dollars.

Imperial says about 21 billion legal cigarettes a year are sold in Australia, although the companies will not disclose individual sales figures, citing commercial-in-confidence.

According to Treasury’s 2013 Economic Statement, tobacco will rake in $8.3 billion in excise and customs duty this financial year, rising to $10.9 billion by 2016-17.

The tobacco industry’s chief argument against plain packaging is that it will cause increased imports of ”chop chop”, or illegal tobacco. Because counterfeiters are not copying brand designs and logos, plain packaging makes it harder to spot fake goods, the industry says.

In recent years, tobacco industry-sponsored research by Deloitte has measured the problem of illicit trade. Results for 2013, in a plain pack environment, are yet to be released. But 2012 results found illegal smugglers imported about 1.8 million kilograms, equal to 10.5 per cent of the legal market, costing the economy nearly $800 million.

Penalties for tobacco smuggling were strengthened in November 2012 and now include a maximum 10 years in jail. ”[And Customs] has not yet seized any illicit plain packaged products,” a Customs spokesperson says.

Meanwhile, several countries are considering plain packs in the wake of Australia’s experiment. Ireland plans to introduce the packs next year, while Scotland has also committed to the move.

In the UK, the Conservative government scuttled plain pack plans in July, saying it would wait for hard evidence from Australia that the change works. Outraged doctors and public health experts claimed the government had bowed to powerful tobacco lobbyists.

But recently, The Observer reported that a renewed cross-party push may bring amended legislation back before the Parliament. In New Zealand, meanwhile, plans are on hold, as the government nervously watches the international legal action taken against Australia.

In Canada, Quebec is also considering its position. Nicola Roxon, former Australian health minister and then attorney-general, recently travelled there at the invitation of a parliamentary committee.

In government, Roxon was the key driver behind Australia’s plain packaging laws, spurred on partly by her father’s death from tobacco-related illness. Master Grocers’ spokesman Jos de Bruin says Roxon ”was on a mission and would listen to no one”.

But Roxon is unapologetic. ”To see one of our plain packs on the table next to [Canadian] products – they have brightly coloured packs shaped like lipsticks, iPods or business card holders – it is quite confronting as they have never been on the market here,” she told Fairfax Media.

”Plain packaging is a long-term game where the benefits will most likely be seen much further into the future.”

Whatever the outcome of legal challenges to plain packaging, the industry now faces another threat. The new Liberal government (taking on a Labor election promise) will increase tobacco excise by $5.3 billion over the next four years. The first 12.5 per cent price rise will happen on December 1. However the packs look by 2016, one thing is sure – on average they will cost about $20 each.

In the meantime, Emily Howard is enjoying the extra spending money that comes with giving up. She has been helped by My QuitBuddy, a phone app developed by the federal Health Department that has been downloaded more than 217,000 times in the past year.

”It tells me how many milligrams of tar I haven’t inhaled since I gave up, how many cigarettes I haven’t smoked and how much money I have saved,” she says.

Before she gave up, she spent between $70 and $130 a week on her habit. She is now paying for a trip to Byron Bay with the money saved. ”I’ve just booked a holiday … and have also got a gym membership,” she says. ”I feel great.”