Smoking both down, and shockingly up, in Africa – Mozambique has seen a 220% growth in cigarette use!

Nigeria, Ghana, Ethiopia among worlds lowest smokers, but in Mauritania adults consume about 41 cigarettes per day the highest in the world. 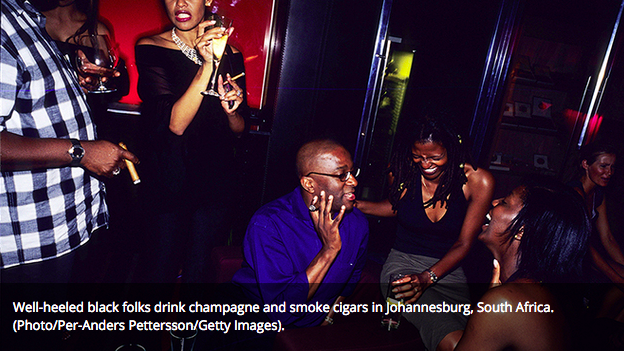 In the last two decades considerablesteps have been made globally to decrease the number of tobacco smokers.

However, despite these efforts, tobacco consumption is still on the riseat about 4% per annum, and has anestimated user base of over 1 billion people. According to the World Health Organisation (WHO) about 80% of these smokers live in low and middle income countries.

Today, the prevalence rate of tobacco smoking in Africa is only 14%. Low, compared to the Americas (23%) and Eastern Mediterranean (31%), but its growth is the highest in world Mozambique, for example, has seen a 220% growth in cigarette consumption over the past 16 years, this according to aLancet Survey.

Interestingly, however, when looking at the ranking of worlds lowest incidences of tobacco smoking a number of African countries feature in the top twenty, including Nigeria, Ghana, Ethiopia and Guinea.

But the continent is also home to some highest ranked smoker countries on the planet, with Tunisia estimated at about 1,628 cigarettes per adult per year, or about 4.4 per day for each and every person over 18 years old. Egypt and Libya follow in second and third place respectively.

The data becomes more concerning when one looks exclusively at the smoking population, discounting those adults who are non-smokers. It turns out that a smoker in Mauritania consumes roughly 41 cigarettes per day the highest number in the world.

It is interesting to see such divergence on the continent.

What this data suggests is that there is a cultural acceptance for tobacco consumption in the Maghreb region, while it is very selective among the population of Sub-Saharan Africa. It seems that in a country like Tunisia tobacco smoking is a norm with about 58% of population being a declared smoker – while in Nigeria, where only 6% of the population uses tobacco, it appears to be an activity restricted to particular social standing.

Indeed, smoking has a long history in Northern Africa. The hookah, or Shisha as it is more commonly known in Europe, officially originated around the 1600s in Persia and quickly spread to India and Northern Africa, where, some say, tobacco products date back to the times of Pharaohs.

The Arab world adopted the hookah, which became the most common social past-time activity, with enthusiasm, and permitted its use in most premises a freedom still exercised to a large extent today. Having designed shishas with double or multiple hoses increased the inclusiveness of tobacco smoking, especially among men.

The hookah became so embedded in the Arab countries that even today a great number of Egyptians, Tunisians and Libyan are not aware of the health risks associated with smoking it, partly because they do not accept the idea of a life without a pipe or a cigarette.

Other Arab countries in Africa, such as Sudan are also heavy hookah users, but Mauritania, on the other hand, follows a more strict social norm where young are not permitted to smoke in front of the elderly making social smoking more difficult, thus curbing its prevalence.

In generally richer and better educated Maghreb tobacco smoking still persists in restaurants, hotels and airports a somewhat more backward attitude compared to Dar-Es Salaam or Nairobi, where smoking is banned not only in the airports and restaurants, but even in public.

In the non-Arab Africa smoking tobacco arrived a little later, albeit only marginally. It quickly transpired as a cultural tradition spanning the spheres of rituals and politics alike.

The merchants from France, Portugal and England only increased the lucrativeness of tobacco and heightened its status.

However, Sub-Saharan Africa, much like Mauritanias customs, is substantially more driven by tobacco-related taboos. It is not customary for youngsters to smoke in front of elders unlike in Libya, Tunisia or Morocco where smoking is simply a social gathering as such, where non-participating elders are not a matter of concern.

Knowing the social customs of Northern Africa as well as the combined market demand of Egypt, Libya, Tunisia, Algeria and Morocco -roughly 178 million people – the tobacco companies felt it was the safest African bet to launch massive campaigns advertising cigarettes in the region.

The tobacco companies make cigarette prices adjusted to the local demand by reducing quality, disproving an argument that more wealthy countries in Africa may afford them and poorer ones cannot. Certainly, however, the profits that can be made of selling slightly more expensive tobacco on a large scale seem a better deal.

To tobacco companies it was apparent that smoking was inherent in the North African culture, so risks to aggressive expansion were minimal.

Sub-Saharan Africa is another market altogether principally – much more diverse and, therefore, complicated.

Since the Northern African tobacco market sales reached a plateau, however, the marketing target has now switching to Sub-Saharan countries. Seeing a relatively low prevalence among these states, the potential for growth is overwhelming especially combined with an universal improvement in well-being and disposable income.

A number of expansive techniques have been quite visible on the continent. In a blog by Brandon Taylor titled Stop Cigarette Advertising From Targeting Minors in Africa,hestates:

British American Tobacco (BAT), a cigarette industry giant, is targeting minors in South Africa with its advertising campaigns. The company is giving out free cigarettes in convenience stores, hosting secret smoking parties for university students, and doing everything possible to hinder anti-tobacco legislation in Africa.

A more reputable media, the Time magazine,explains the ease in which tobacco companies penetrate the Africa market:

That [tobacco] expansion increasingly happens through the single-stick model, and thats the traffic that causes the most worry. People who buy cigarettes by the stick are typically the poor, the uneducated or the young all groups less likely to have learned of the perils of smoking. [A single stick is] much more affordable, and for young people, its easier to conceal, says Babatunde Irukera, an antismoking lawyer working with the Nigerian government.

The often rudimentary tobacco-related laws in Zimbabwe, for example tobacco advertisement is still permitted on national television – and media exposure to smoking have made it easier for tobacco companies to gain its market share in Sub-Saharan Africa.

The Lancet World Report underlines that currently 90% of Africans are unprotected by smoke-free laws.