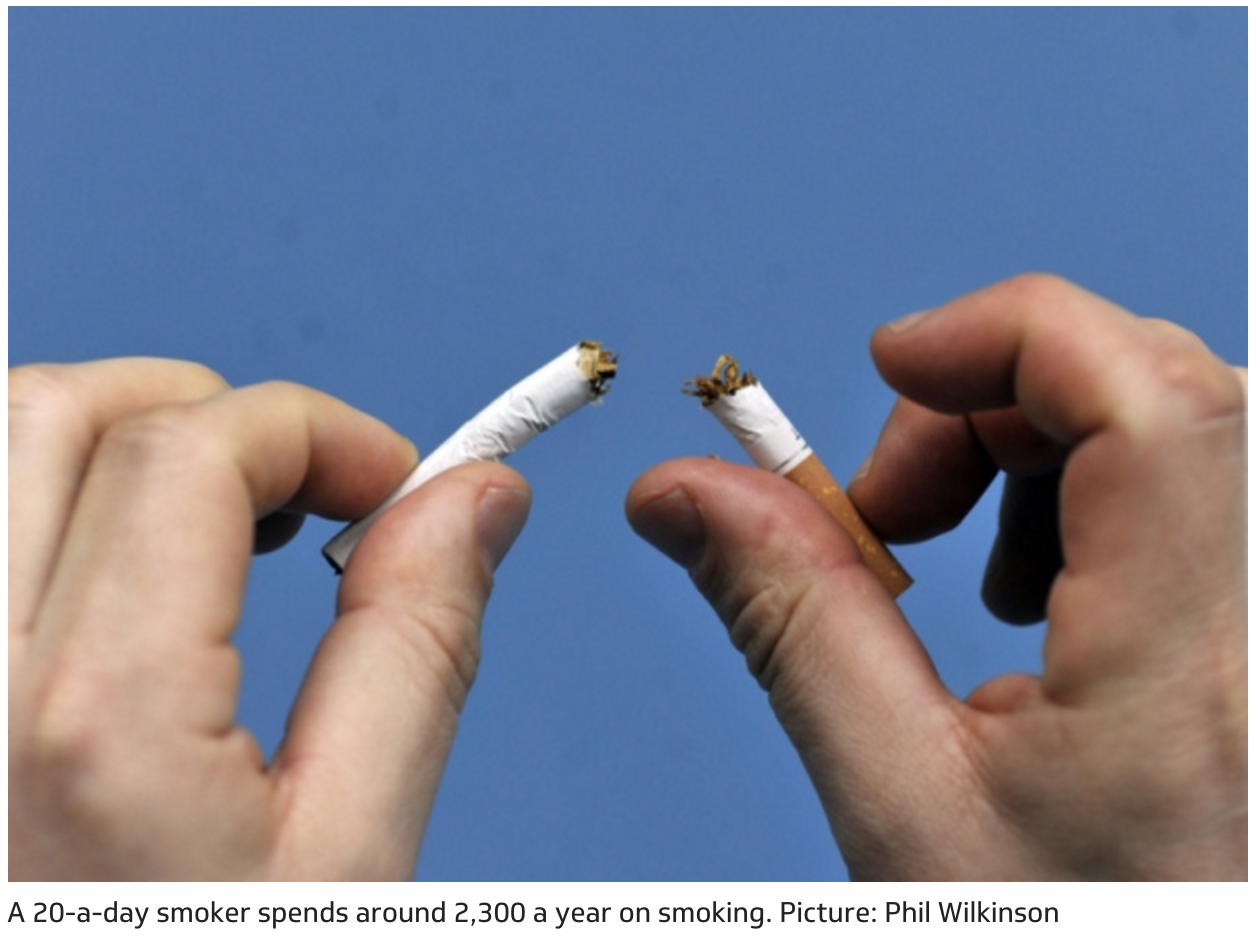 Health and finances, especially among the lower paid, are both hit by addiction

The message that stopping smoking is a great way to save money is getting more attention in public health circles, and for good reason. There are at least two ways to consider the cost of a cigarette. In health terms the answer is straightforward – 11 minutes. That’s the average amount of life estimated to be lost from smoking one cigarette. So for every 100 packs of 20 cigarettes a shop sells, 15 days of life expectancy goes up in smoke from the community that shop serves.

In financial terms the calculation is more complicated. Bought cigarettes typically cost around 42p each. Much of that price represents tax, but a fair chunk of it is tobacco industry profit. The 2013 profits of the top six tobacco companies worldwide were equivalent to the combined profits of The Coca-Cola Company, Walt Disney, General Mills, FedEx, AT&T, Google, McDonald’s and Starbucks in the same year.

Roll your own tobacco and illicit tobacco both typically come in at roughly half the price of manufactured cigarettes. Illicit tobacco may also help fund serious crime such as trafficking in people, weapons and drugs.

However all forms of lit, smoked tobacco are immensely damaging to health.

Crunching the numbers for the various sources of smoked tobacco gives an overall estimate of around £2,300 a year for a 20-a-day smoker. The economic costs of maintaining a smoking habit or addiction are huge, and they hit people particularly hard in those communities where income is lowest and smoking rates are high. ASH Scotland calculates that reducing the smoking rate in Scotland’s most deprived areas by just 1 per cent (from 34 per cent to 33 per cent) would release around £12.5 million extra finance into the household budgets of people in those communities every year. There are few interventions which can deliver that level of benefit.

Some will argue that reducing the tax on tobacco would be one way to reduce the monetary burdens of tobacco on our poorest communities. But price has a strong impact on smoking rates, and motivates smokers to quit. Reducing the cost of tobacco would lead to more smoking, and more harm to people’s health.

You hear less often that around half of the recent increases in the price of tobacco have stemmed not from Treasury tax policies but from the tobacco industry’s own price hikes, introduced under cover of national tax increases and boosting tobacco company profits. Tobacco companies are making obscene amounts of money out of people in Scotland.a

The industry is fond of presenting itself as a legal industry and as purveyors of pleasurable consumer experiences. But smoking is an addiction of childhood. Most adult smokers say they started as children, and the majority wish they hadn’t. Every day in Scotland around 36 children under 15 start their journey as smokers, and for many the initial experimentation goes on to become a lifetime drain on their finances and health. At the same time, for another 36 people a day that journey comes to a premature end due to an illness caused by tobacco. Smoking has blighted the lives of so many. For each one of the 13,000 adults in Scotland whose lives are cut short each year by tobacco, there are some 20 people living with chronic and disabling conditions caused by smoking – cancers, heart disease, lung diseases, stroke, dementia. Almost half of the adults who are long-term sick or disabled in Scotland are current smokers, and on average their needs for care and support come nine years earlier than for ex-smokers and never-smokers.

A few years ago a Lancet editorial characterised tobacco as “surely the most cruel and corrupt business model human beings could have invented”.

Any consideration of the health and wellbeing of Scotland’s communities demands that we continue the regulatory pressure on tobacco, the most harmful consumer product on general sale.

At the same time there are opportunities. Reducing smoking rates could be a highly effective part of Scotland’s drive to reduce the harms from poverty, and the sooner we put reducing smoking at the heart of our anti-poverty agenda the better.