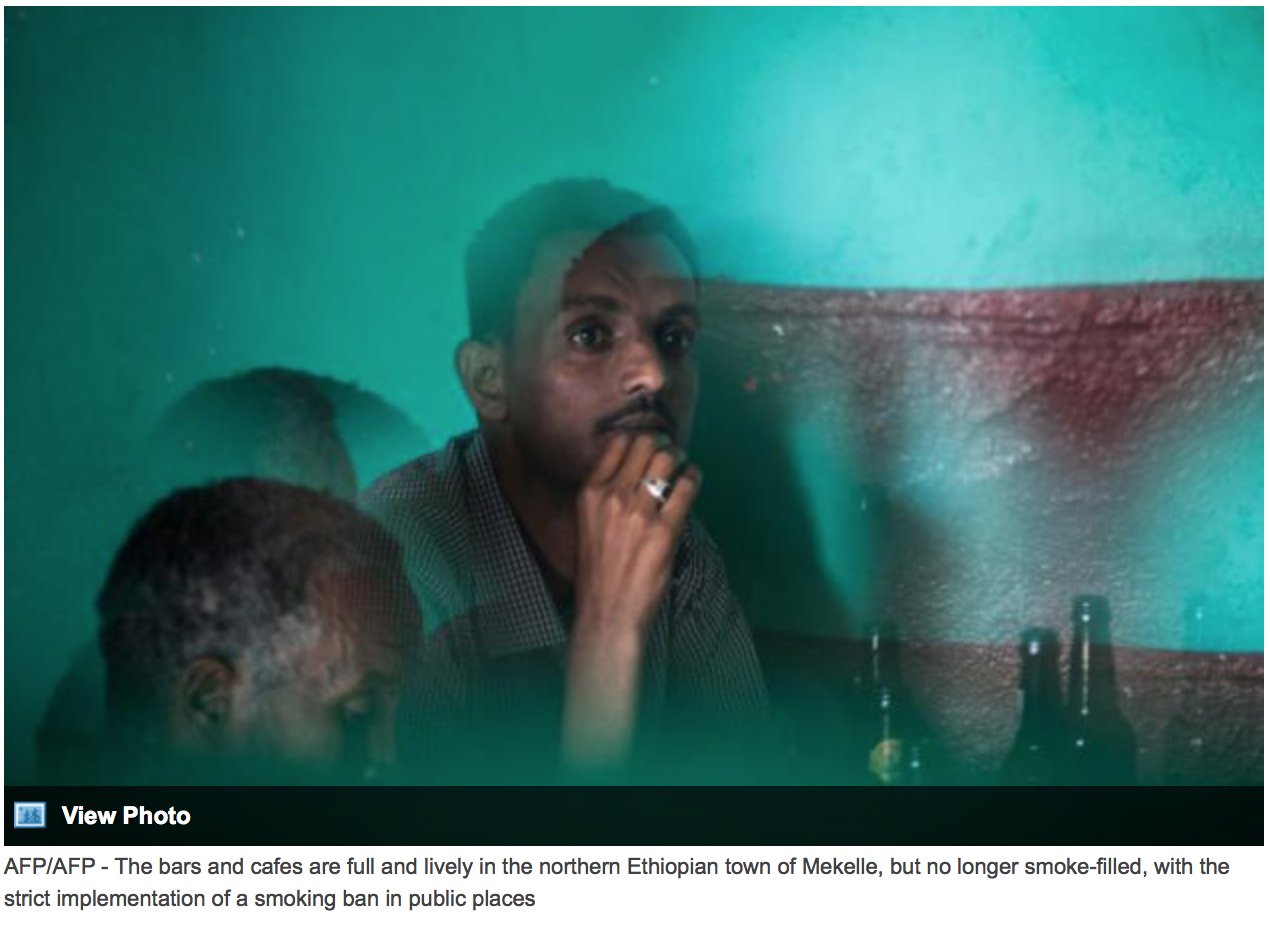 The bars and cafes are full and lively in the northern Ethiopian town of Mekelle — but they are no longer smoke-filled, with the strict implementation of a smoking ban in public places.

“It’s a good thing,” said Hiriti, the owner of a small bar in a busy street. “Of course, some customers are not happy, but it also depends on the way you tell them not to smoke.

“I tell them it is not only about the law. It is also about your health,” he said. “They react better if you tell them that way.”

The town of Mekelle is bucking the trend in Africa where tobacco use is increasing driven by companies that see a growing market on the continent amid a tightening of smoking laws elsewhere.

Tobacco consumption in Africa — excluding South Africa — increased by almost 70 percent between 1990 and 2010, according to a study by the American Cancer Society. The number of African smokers could grow by 40 percent by 2030, the study predicted.

Ethiopia is not the first country to impose a ban, but is one of the few to act on the law. Kenya’s capital Nairobi has designated smoking cabins, with smoking on the street illegal, although the rule is widely flouted.

Several African countries have a complete ban on smoking in public — most recently, Uganda passed a law banning smoking within 50 metres (160 feet) of any public place — according to the World Health Organisation (WHO), but such laws are rarely implemented.

Nearly 80 percent of the more than one billion smokers worldwide live in low and middle-income countries, “where the burden of tobacco-related illness and death is heaviest”, according to the WHO, which estimates that 600,000 people die worldwide each year from the effects of second-hand smoke.

In Ethiopia, parliament passed a law banning smoking in public places in 2014 and Mekelle is the first city to implement it.

The town of some 200,000 people is the state capital of the far northern Tigray region. Since January smoking has been banned in cafes, restaurants, schools and hospitals, as well as cultural, sports and religious centres.

Those who break the ban face a fine of 1,000 Ethiopian birr ($50) fine, a small fortune in Ethiopia where salaries rarely exceed $100 a month.

“We hardly see more smokers. People really stopped,” said Teklay Weldemariam, the head of the city’s health department and one of the architects of this law.

“The speed of non-communicable diseases is increasing. Cancer is one of them. So it is high time to ban cigarettes in public areas.”

He hopes Mekelle will be an example to others.

“I know other Ethiopian towns are interested in the experience of Mekelle. This can also inspire other East African cities,” said Teklay.

Some grumble at the ban, frustrated at the restrictions, but others say the law is necessary.

“If you enter a cafe with smokers, you could not say anything because it was part of social life, it was fully accepted. This prohibition is a very good idea,” said John Haile Selassie.

After targeting tobacco, the authorities are also aiming to stamp out khat, a leafy green herb that is mildly narcotic when chewed.

“Consumption is rising and the government wants to do something,” said Teklay. But he recognised the subject is “sensitive” as chewing khat plays a role in some customs and traditions in parts of Ethiopia.