The foreign investment plan is a hoax that will ultimately be funded by Taiwanese smokers, claims activist 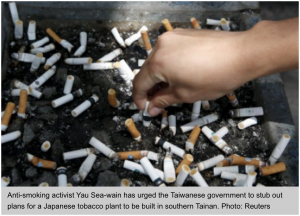 An anti-smoking group in Taiwan has urged the Taiwanese government and a Japanese tobacco giant to immediately halt plans to build a factory in the south of the island.

Calling the investment plan a “hoax”, Yau Sea-wain, chief executive officer of John Tung Foundation, told a press conference that while Japan Tobacco International (JTI) – the international tobacco division of Japan Tobacco Inc. – claimed it would spend NT$9.27 billion (HK$2.2 billion) on building the plant, it was expected to milk more from its loyal Taiwanese customers through increasing prices of its some 20 brand products by NT$10 to NT$30 per pack.

If it sells 700 million packs of cigarettes a year, it could collect more than NT$10 billion annually from Taiwanese consumers, Yau said.

“The so-called foreign investment plan actually is funded by Taiwanese smokers,” he said.

Construction on 7.6 hectares of land at the Tainan Technology Industrial Park in Tainan, southern Taiwan, has already begun after the Ministry of Economic Affairs approved JTI’s application.

Yau argued that the government agencies’ move was “foolish” and that it violated the spirit of the World Health Organisation Framework Convention on Tobacco Control, citing guiding principles of Article 5.3 of the convention.

Principle 4 describes tobacco products as “lethal” and states that the tobacco industry should not be granted incentives to set up or run their businesses.

But JTI would be entitled to tax exemptions by building the factory at an industrial park.

Yau also argued that the investment plan was illegal because it violated the Statute for Investment for Foreign Nationals, which bans foreign companies from investing in industries harmful to national health.

What was worse was that the Taiwan-Japan investment pact would allow Japanese companies to manufacture tobacco products in Taiwan, while Taiwanese companies were banned from doing so in Japan, he said.

Annex II of the Interchange Association, Tokyo’s de facto mission in Taiwan, stipulates that certain sectors do not need to conform with the pact, including the tobacco industry.

Yau urged the Executive Yuan, or Cabinet, and the Tainan government to stop JTI and other international tobacco firms from setting up factories there.

The foundation said JTI held a commanding 35 per cent share of Taiwan’s tobacco market and that Taiwan was among JTI’s most profitable overseas markets.

There are two foreign-invested tobacco factories in Taiwan, both in Miaoli, the central part of the island. They are run by the Britain-based Imperial Tobacco Group and the Taiwan Miaoli Cigarette Factory of the Hong Kong-based Alishan Group.