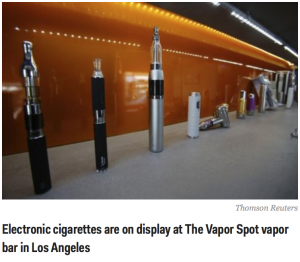 (Reuters) – U.S. teens who try electronic cigarettes may be more than twice as likely to move on to smoking conventional cigarettes as those who have never tried the devices, researchers from the University of Southern California said on Tuesday.

The findings, published in the journal JAMA, offer some of the best evidence yet at establishing a link between e-cigarettes and smoking, said Dr. Nancy Rigotti, an expert in tobacco research at Massachusetts General Hospital and author of an editorial accompanying the study.

“Adolescent brains appear to be especially susceptible to becoming addicted to nicotine when exposed,” Rigotti told Reuters Health in an email.

About 2 million middle- and high-school students tried e-cigarettes in 2014, triple the number of teen users in 2013, the Centers for Disease Control and Prevention reported in April.

The data sparked alarm among tobacco control advocates who fear e-cigarettes will create a new generation of nicotine addicts who may eventually switch to conventional cigarettes.

Big tobacco companies, including Altria Group Inc , Lorillard Tobacco Co [LO.UL] and Reynolds American Inc, are all developing e-cigarettes. The battery-powered devices feature a glowing tip and a heating element that turns liquid nicotine and other flavorings into a cloud of vapor that users inhale.

An international review of published research by the Cochrane Review in December concluded that the devices could help smokers quit but said much of the existing evidence on e-cigarettes was thin.

In the latest study, the University of Southern California researchers surveyed roughly 2,500 Los Angeles high-school students about tobacco use three times over the course of a year. The study began in the fall of ninth grade, when the students were about 14 and not smoking.

At the start of the study, 220 students said they had tried electronic cigarettes, the researchers said.

If the students admitted to using e-cigarettes, they were more than twice as likely to report smoking cigarettes during the course of the study, while the likelihood more than tripled for taking up hookah and more than quadrupled for cigars.

“Our research does suggest that teens who use e-cigarettes for recreational purposes may be more likely to later advance to trying regular cigarettes and other smokable tobacco products,” lead author Adam Leventhal of the University of Southern California Health, Emotion and Addiction Laboratory said in an email.

Although the findings are not definitive, Rigotti said they offered the first evidence in a study looking at the same population over time to show that teens who use e-cigarettes are more likely to eventually try conventional cigarettes than those who do not use the devices.

E-cigarettes are available to more than half the world’s population and may generate $10 billion in annual sales by 2017, Dr. Andrew Chang and Dr. Michele Barry, both of Stanford University School of Medicine, wrote in a second editorial published with the study.

Children who try these products may be more likely to become smokers, Chang said, and they also may be at increased risk for accidental overdoses from drinking nicotine fluids intended for e-cigarette cartridges.
Read more:  http://www.businessinsider.com/r-teens-who-try-e-cigarettes-more-likely-to-start-smoking-study-2015-8#ixzz3jFKts9Qm