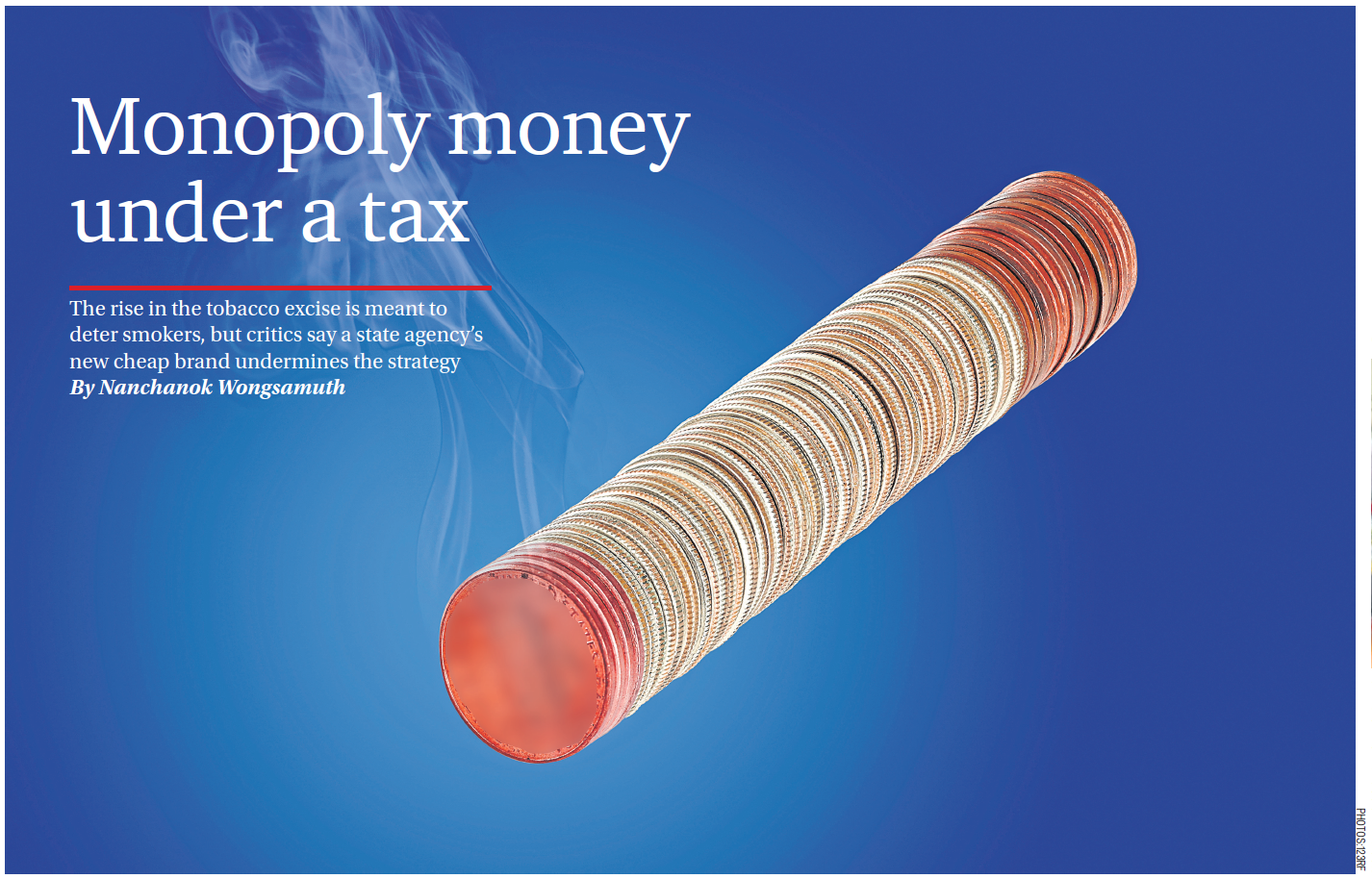 Poom Prasit had been smoking the local Krong Thip cigarettes for the past 13 years. On the day of the announcement of the latest tobacco tax hike in February, however, he immediately decided he would switch brands. The next day, he bought a pack of SMS instead.

“It brings up lots of phlegm, but I eventually got used to it,” said the 29 year old, who earns a monthly salary of about 20,000 baht selling mattresses. “My daily expenses would be affected if I continued to smoke Krong Thip at this time.” 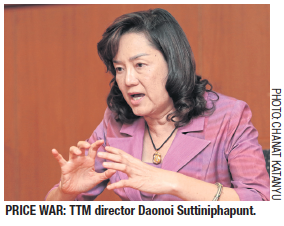 Smokers have been forced to pay an additional 10-27 baht per pack following the tax rise — the highest price increase ever imposed on cigarettes in Thailand. A pack of Krong Thip, a popular mid-range brand, now costs 86 baht compared to 67 baht before the tax hike.

For Mr Poom, who smokes a pack of cigarettes every day, switching to the more affordable SMS brand — which now costs 51 baht compared to 40 baht previously — is the only way to keep his expenses down, as he will not give up smoking.

While health advocates applauded the tax hike as a useful tool for controlling cigarette consumption, the state-run Thailand Tobacco Monopoly is arguing such measures not only fail to act as a deterrent to smoking, but also cause a shift to low priced, in many cases illicit, tobacco products. 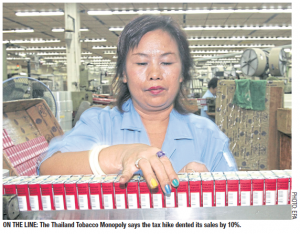 TTM claimed its sales were so negatively affected they had to introduce a new brand of cheap cigarettes to cater to the low-income sector — a move immediately denounced by anti-smoking activists when the plan was announced on Feb 27.

The new Line brand, whose cigarettes are slightly smaller in diameter than standard brands, was launched in 24 provinces including Bangkok on March 31. While it is not yet sold in convenience stores, TTM claimed initial surveys show the brand received a satisfaction level of four out of five, despite the low price of 40 baht per pack.

“Line is an attempt to retain our market share,” said TTM managing director Daonoi Suttiniphapunt. “We don’t want consumers to switch to foreign cigarettes. We want them to use ours.”

The recent tax increase, aimed at both controlling cigarette consumption and 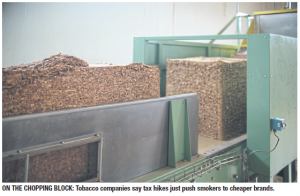 increasing revenue, did not come as a surprise to the tobacco industry. The Finance Ministry hinted it would submit the matter for cabinet approval at the beginning of the year. But no one expected such a drastic increase.

“You can’t go any higher than this,” Ms Daonoi said. “What makes it worse is that the economy is not performing well at this time.”

Thailand has a system where the tax applicable is based on either “value” or “volume”; whichever method results in a higher tax rate is used.

Under the “value tax” system, if a pack of cigarettes leaves the factory at a price of 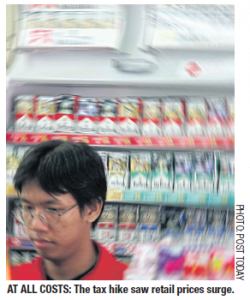 50 baht, a maximum impost of 45 baht can be levied. Under tobacco pricing laws the maximum value tax on cigarettes cannot exceed 90%.

Following the increase in February, cigarette brands taxed in terms of value hit the 90% ex-factory price ceiling, up from the 87% rate imposed since 2012.

But because Thailand calculates its tobacco excise using a tax-inclusive rate, a complicated formula is applied which means a small increase in the rate can actually lead to a dramatic increase in retail prices. This is the reason why the 3% tax hike in February means smokers are now handing over around 25% more per packet of cigarettes.

Taxes in terms of volume also rose from one baht per gramme, the weight of an average cigarette, to 1.1 baht per gramme. This would translate to a 22 baht tax on a typical packet of cigarettes.

TTM, which has a monopoly on the manufacturing and distribution of tobacco products in Thailand, saw a 10% decrease in cigarette sales a month after the tax hike, said Ms Daonoi. Initial figures show that the drop ranged from 9-12% per week, or almost one billion cigarettes a month.

Ms Daonoi attributed part of the decrease to the hoarding of products in anticipation of a price increase, as well as a temporary drop in consumer demand, which is expected to return to normal within three months. But what figures also show is shifting consumption from the mid-range brands towards the lower end cigarettes which cost less than 50 baht per pack.

“We predict that while the market size might see a slight decrease, the number of smokers will remains the same,” said Ms Daonoi, adding that on top of switching brands, consumers are also likely to purchase illicit tobacco products and roll-your-own cigarettes, the latter of which she says has more residue such as tar and nicotine than pre-rolled cigarettes.

“We need to admit that it is difficult for people to quit smoking.”

TTM, which currently produces 16 brands of cigarettes, claims a market share of roughly 75% of the roughly 40 billion cigarette sticks sold per year, which Ms Daonoi says it has been able to maintain for many years.

Health advocates consider the recent tax hike long overdue, as the previous one was implemented in 2012. Thailand on average raises cigarette taxes once every two years, with this recent one considered the 11th cigarette tax hike since 1992, when the tax rate was 55% of the ex-factory price.

The higher tax will add an estimated 12 billion baht in revenue this fiscal year and 15 billion annually in subsequent years, according to the Finance Ministry.

“Ideally the tax increases should be implemented every year, since the effects would run out every six months due to the substitution effect, where consumers switch to lower priced brands,” said Prakit Vathesatogkit, a member of the national committee on the control of tobacco.

Tobacco tax increases lead to few instances of smokers quitting, Dr Prakit said, but price increases are highly effective in reducing consumption among existing users. According to the World Health Organisation, on average, a 10% price increase on a pack of cigarettes would be expected to reduce demand for cigarettes by about 4% in high-income countries and by about 5% in low- and middle-income countries, where lower incomes tend to make people more sensitive to price changes.

In Thailand, tobacco tax increases between 2004 and 2014 are attributed to smoking rates dropping from 23% to 20.7%, according to the National Statistical Office.

“If you usually smoke a pack of 20 cigarettes a day, a 10% increase in prices would lower that to 16 cigarettes a day,” said Dr Prakit, who is also executive secretary of the Action on Smoking and Health Foundation.

To encourage smokers to quit and prevent them switching to cheaper cigarette brands, tax rates need to be even higher, he said. Because the “value tax” has already hit the ceiling of 90%, the government could increase taxes in terms of volume to reach the ceiling of three baht per gramme, from the current 1.1 baht, said Dr Prakit.

“Across the world, tax intervention is the most important tool in reducing smoking prevalence,” said Dr Prakit, citing a study by US economics professor David Levy which showed that between 1991 and 2006, 61% of the decline in smoking prevalence due to policies was attributed to price changes. “Tobacco firms are most scared of taxes.”

Foreign brands were also hit by the tax hike, with Japan Tobacco increasing retail prices of its Winston brand from 68 to 87 baht per pack, and 98 to 125 baht for its Mevius brand. Philip Morris (Thailand) raised the prices for Marlboro from 95 to 120 baht and L&M from 68 to 87 baht.

Pongsathorn Ansusinha, director of corporate affairs at Philip Morris (Thailand), echoed TTM’s view, saying such a steep tax increase will only worsen the problem of smokers trading down to cheaper brands. He cited the excise tax rise in 2012, which resulted in low-price brands increasing their market share from 23.5% to 34.6%.

At Oasis Whiskey & Spirit in Chiang Mai’s Muang district, more than 40% of customers have switched to cheaper brands, said owner Porawee Britton. The cheapest product sold at the shop is Wonder, a local brand produced by TTM, which is now priced at 63 baht a pack.

“I was surprised by the drastic increase,” said Mr Porawee. “Never before have I seen such a high tax hike … it was unbelievable.”

Meanwhile, price increases have led to a surge in illicit tobacco products which are smuggled into the country to avoid taxes or in the form of counterfeit products.

Despite facing a short-term drop in sales, TTM expects its sales revenue this year to remain steady at around 80 billion baht due to cost control. TTM provides 88% of its profit to the Finance Ministry, while part of its revenue is provided to other autonomous state agencies such as the Thai Health Promotion Foundation and the Thai PBS TV channel.

Along with competition from small cigarette companies, Ms Daonoi said TTM also faces obstacles as a state enterprise such as being pressured to purchase tobacco from farmers at a high price.

Construction of its new 2.5 billion baht factory was finished in April last year, and is part of TTM’s long-term plan to relocate from Bangkok to Rojana Industrial Park in Ayutthaya province. Relocation of machinery at the existing site in Klong Toey will start in the first quarter of next year, when operations will partially begin at the new site. The new site will be fully operational in 2019.

TTM has been sitting on 620 rai of land next to the Queen Sirikit National Convention Centre for the past 45 years. Some 320 rai of that will be turned into a park and donated to HM the Queen on her birthday on Aug 12.

“I feel uneasy that we sell sin products, but if we really look at it, if TTM doesn’t produce and sell, foreign companies will do it,” said Ms Daonoi. “We want to lower the amount of smokers while still maintaining our market share.”

“TTM should not introduce a brand to maintain their market share. It is inappropriate, and shows a conflict with the government’s policy [to lower cigarette consumption],” she said. “The fact that the tobacco industry uses these tricks shows that price does have an effect on consumption.”