Now, Frieden is director of the Centers for Disease Control, and he’s trying to change the culture in the parts of America where smoking is still widely accepted. A new $70 million installment of the CDC’s anti-smoking ad campaign targets current and former members of the military and people with mental health conditions. The ads, which show former smokers with tobacco-related diseases, will run most frequently in areas where smoking rates are highest, including parts of Kentucky, Louisiana, Mississippi, Ohio, and West Virginia. 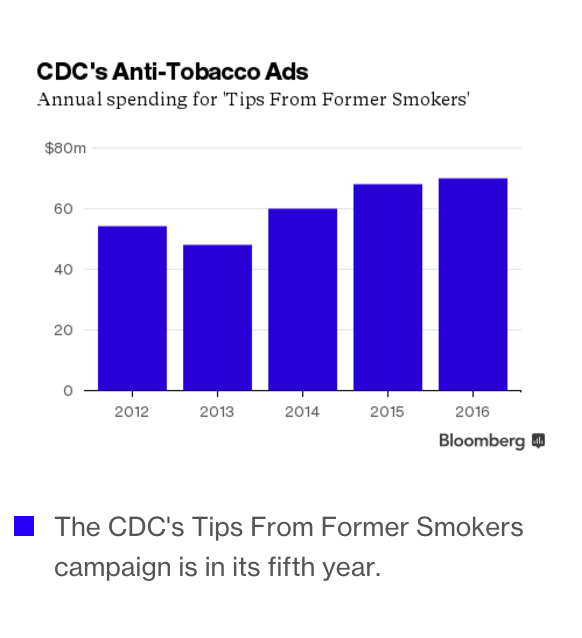 Even as smoking rates have declined dramatically nationwide, much of America remains tobacco country. About 40 million U.S. adults smoke, contributing to nearly half a million deaths each year. Swaths of the American South still permit smoking in indoor workplaces and have relatively light tobacco taxes. Service members and veterans are more likely to smoke, and the CDC estimates that 3 in 10 cigarettes are smoked by someone with mental illness.

The new round of ads will run on TV, print, radio, online, and outdoors for 20 weeks starting on Jan. 25. They include stories from an Air Force veteran in Texas who smoked heavily from a young age and had a heart attack in his 30s. Another new ad shows a woman who smoked while struggling with depression and anxiety. It shows pictures of her mouth after she lost teeth to gum disease.

Almost 70 percent of smokers say they want to quit. The Tips From Former Smokers messages helped about 100,000 people quit in 2012, the first year of the campaign, according to research from CDC authors. At less than $400 spent per additional year of life gained, the agency considers it one of the most cost-effective public health interventions. Only the budget set by Congress keeps the agency from running ads year-round, Frieden said.

Some question whether the campaign could be more effective. John Ayers, a computational epidemiologist at San Diego State University, compared Google search patterns during the first two years of the Tips campaign. He says the similar ads didn’t pack the same punch the second time around, as measured by search queries for smoking cessation terms. “Tips probably has helped a lot of smokers quit smoking, but its effectiveness has declined over time,” Ayers said.

The CDC sees a clear link between when the ads run and calls to the 1-800-QUIT-NOW line that the messages promote to connect smokers with cessation aids. Frieden is also aware that the message is dramatically outgunned by the tobacco industry. Tobacco companies spent $9.2 billion on promotion and marketing in the U.S., mainly in the form of price discounts, according to the Federal Trade Commission’s most recent tobacco report, which covered 2012.

The Big Three cigarette companies, Reynolds, Lorillard, and Altria, spent a combined $257 million on advertising in 2014, an amount that’s nearly doubled in two years, according to company securities filings. (Reynolds acquired Lorillard last year.) And tobacco companies are back on TV with ads for e-cigarettes after being banned from advertising on television since the Nixon administration. Reynolds owns the e-cig brand Vuse, and Altria owns brands including Green Smoke and Mark Ten. The Food and Drug Administration is considering new rules for e-cigarettes but hasn’t suggested advertising restrictions.

Still, despite the headwinds, Frieden believes the ads help shrink the territory tobacco occupies on our cultural map. “We went as a society from where a polite thing would be to say, ‘Would you like a cigarette?’ to where the polite thing was, ‘Would you mind if I smoke?’ to where you wouldn’t even ask that,” he said. “That’s a huge shift in how we view smoking as a society.”