If you think e-cigs are a safer alternative to regular cigarettes, think again. 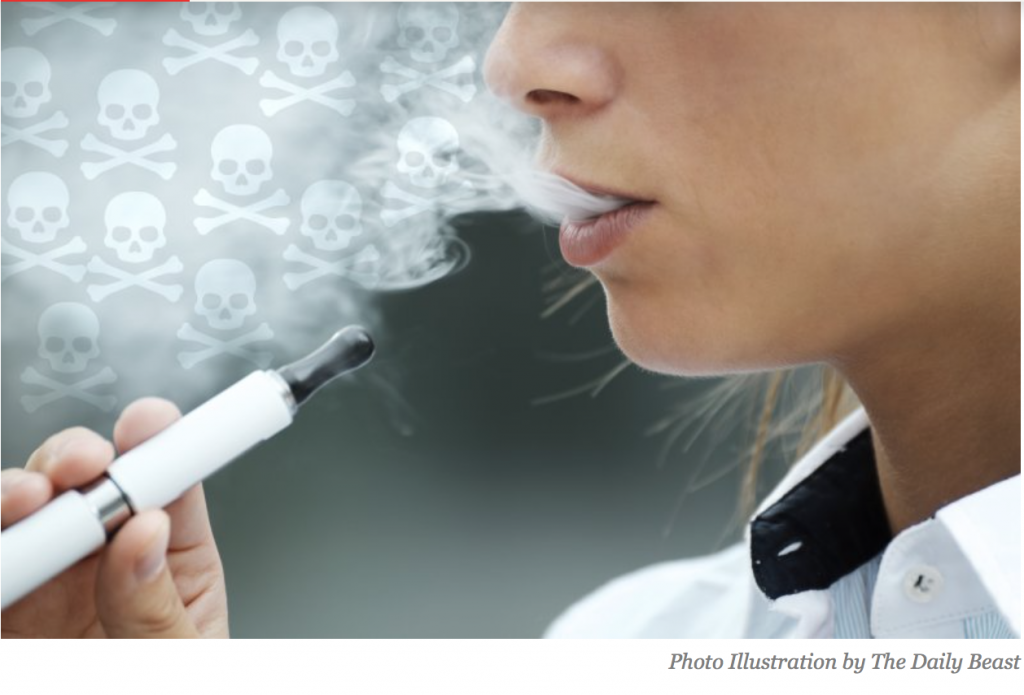 An independent study from the Center for Environmental Health (CEH) this week has offered new evidence that e-cigarettes contain cancer-causing agents. If the research holds up, the devices’ days as a “healthy alternative to smoking” may be numbered.

The e-cigarettes used today are based on one a Chinese pharmacist named Hon Lik created in 2003. Lik made the device with the hopes of kicking his smoking habit—one that he had just watched take his father through lung cancer. While it didn’t help Lik quit, it did pique the interest of those around him.

After first taking off online, the device made its way to Europe and the U.S. between 2006-2007. By 2009 an estimated 100,000 had been sold in America. After a few big name celebrities like Leonardo DiCaprio were pictured with one, the device took off.

Today, experts estimate that more than 20 million Americans have tried e-cigarettes, bringing sales of the product above $3 billion dollars annually. Investment analysts say the industry is on the verge of a rapid expansion, with the potential of reaching $10 billion in the next two years.

As successful as they are, the digital or battery-powered devices are the source of much controversy in the scientific world. Not yet approved by the Food and Drug Administration (FDA), there is little research on their health effects and few regulations surrounding their use. The result is a product that’s left a huge unanswered question: are e-cigarettes safer than real smoking?

It’s a question that CEH researchers set out to explore in their study, titled A Smoking Gun: Cancer-Causing Agents in E-cigarettes. The first large-scale study of its kind, it involved testing 97 products from 24 different e-cigarette manufactures for cancer-causing agents. Studies on potentially dangerous chemicals in the devices have been done, but this one had a major difference: it tested the level of chemicals via machines that mimicked how the devices are used.

The results were staggering. Ninety percent of the companies tested were shown to have at least one product with extreme levels of cancer causing gases. In one case, the product contained 254 times the legal amount of acetaldehyde; in another, a product showed 473 times the amount of formaldehyde. Using these results, the CEH plans to take legal action against the companies, claiming they are in violation of California’s consumer protection law, Proposition 65.

CEH’s research comes on the heels of a controversial New England Journal of Medicine study from January 2015, which implied that there are hidden levels of formaldehyde in e-cigarettes. The study was highly criticized by those in the e-cigarette industry and outside of it, who claimed the high temperatures used during testing were unrealistic. One industry expert, in describing how unscientific he viewed the process, likened it to “grilling a steak for 18 hours.”

In order to avoid the same controversy, the California researchers from CEH, a nonprofit launched in 1996 to protect the public against toxic chemicals, teamed up with the American Association for Laboratory Accreditation. A2LA is a nonprofit, non-government organization that has been testing cigarettes for years.

With their help, researchers were able to test the levels of cancer-causing agents through smoking machines that simulate how the products are actually used. Their results show the vast majority of leading e-cigarette manufactures producing products with unsafe levels of formaldehyde, acetaldehyde, or both. The chemicals were even found to be present in products that were marketed as nicotine-free.

The researchers blame e-cigarette marketing—reportedly an 80 million dollar industry—for “deceptive” advertising, which they say minimizes adverse health affects and promulgates unverified safety claims. A variety of individuals have filed lawsuits against e-cigarette companies, some alleging that their advertising is akin to early advertising for cigarettes.

Outside of the risk of exposure to cancer-causing agents, e-cigarettes have been shown to prove dangerous for kids. The concentrated liquid nicotine, which can be easily accessed, is highly toxic. From 2010-2014, the Centers for Disease Control and Prevention (CDC) reported that calls to poison control centers for exposure to e-cigarette liquid had skyrocketed; more than half of them involving children under the age of five.